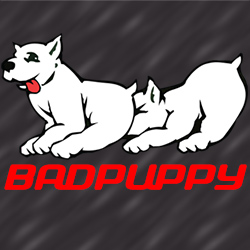 The Badpuppy gay pornography website is based in Cocoa Beach, Florida and was founded on May 17, 1995. Badpuppy was the first gay adult membership site and continues to be ranked as a leading gay mega site.[2] The Badpuppy website features exclusively produced movies and image galleries of amateur men as well as professional gay porn stars. Models for the site are filmed by producers from around the globe, which creates a variety of styles, model types and locations. The Badpuppy brand also hosts thirty additional websites owned and managed by producers and webmasters. These independent websites operate as a part of the "Badpuppy Network".

Badpuppy started as a simple bulletin board system. At the time, Baduppy founders Bill Pinyon and Max Zechinato were working at NASA as network specialists, but dreamed of setting up their own company. By 1996, the company had 23 employees and 30 individual contributors.[3]

Badpuppy maintains three trademarks with the United States Patent and Trademark Office for the word Badpuppy[4] and the Badpuppy logo.[5]

The mission of Badpuppy is to "Create a user-friendly, one ticket pass to the world of gay adult entertainment while consistently providing the highest quality product at the most economically affordable price."

Since Badpuppy's inception, adult industry print and online publications such as AVN (magazine),[7] XBIZ[8] and Adult Web Life have covered Badpuppy from their early days with "hundreds" of feature articles and press releases about the company.

The website has increased its consumer base through online campaigns as well as Gay adult print publications over the years such as: Allboy Magazine, Freshmen, Men, Unzipped, JustUsBoys, Playgirl, Mandate, Dude Magazine and others.

This article "Badpuppy" is from Wikipedia. The list of its authors can be seen in its historical and/or the page Edithistory:Badpuppy. Articles copied from Draft Namespace on Wikipedia could be seen on the Draft Namespace of Wikipedia and not main one.

Retrieved from "https://en.everybodywiki.com/index.php?title=Badpuppy&oldid=861913"
Categories:
Hidden categories:
This page was last edited on 17 July 2020, at 17:58.
This page has been accessed 446 times.
Content is available under License CC BY-SA 3.0 unless otherwise noted.
Privacy policy
About EverybodyWiki Bios & Wiki
Disclaimers
Mobile view