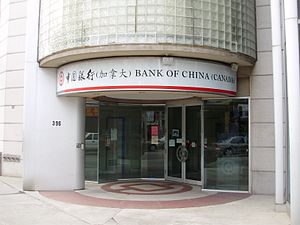 A branch located in Toronto's Chinatown

Bank of China (Canada), commonly known as BOCC, is the Canadian subsidiary of the Bank of China (BOC). The Bank of China began its business in Canada by opening a representative office in Toronto on September 8, 1992. BOCC was incorporated as a subsidiary of BOC in 1993 under Schedule II of the Bank Act.[1] BOCC provides the following types of banking services in Canada: bank accounts to both personal and commercial banking clients, remittance services (including bank drafts and wire transfers), loans and mortgages, foreign exchange services, and China visa application assistance services where by it acts as agent, however plans for a China Visa Application Centre are being made and it is anticipated that the Consulate General of the People Republic of China in Toronto will entrust all future China Visa applications to Bank of China Canada's Visa Application Centre.

In Canada, BOCC has ten locations located in Markham, Scarborough (under the name "GTA Toronto" branch), Toronto (several branches, in North York and downtown), Mississauga, Vancouver, Montreal, and Calgary. It previously had branches in Burnaby and Richmond. As well, the bank is a member of the Canadian Bankers Association (CBA); registered member with the Canada Deposit Insurance Corporation (CDIC), a federal agency insuring deposits at all of Canada's chartered banks; and, a member of Interac, which handles transactions between automated teller machines of different banks and debit card transactions.

Share
Retrieved from "https://en.everybodywiki.com/index.php?title=Bank_of_China_(Canada)&oldid=862281"
Categories:
Hidden categories:
This page was last edited on 17 July 2020, at 20:52.
Content is available under License CC BY-SA 3.0 unless otherwise noted.
This page has been accessed 887 times.
Privacy policy
About EverybodyWiki Bios & Wiki
Disclaimers