For other battles with the same name, see Battle of Hénin (disambiguation).

The Battle of Hénin-sur-Cojeul took place on the 2nd of April 1917 between the British forces and the German forces at Hénin-sur-Cojeul, a French village situated 6 miles (9.7 km) southeast of Arras. The casualties included about 185 British and over 100 Germans, although the number of wounded Germans is unknown.

After the Germans retreated to the Hindenburg Line in March 1917 they cleverly and strategically left troops in fortified villages so that if the British wanted to pursue to German retreat they would have to capture and control each of these villages. The German retreat confused British high command who had spent most of the winter devising plans for an April attack on the old German Front line which was now vacated.

British high command quickly devised a new plan to attack the Hindenburg Line. These attacks would start on the 9th of April 1917.

The northern-most fortified village was Hénin-sur-Cojeul.

The attack on Hénin took place on the 2nd April 1917. The infantry advanced at 05.15 hrs, preceded by a creeping artillery bombardment, aimed at crippling German defences. 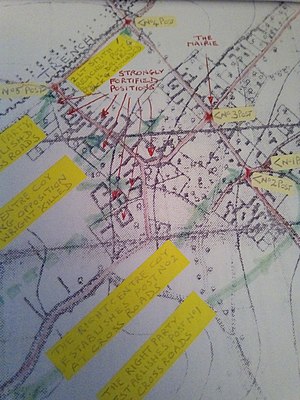 The aim of this battle was to clear German defenders from this village thus clearing a path for an all out attack on the Hindenburg Line a week later. The aim was also to stop Germans from returning to the village, so the battle was all about capturing and controlling the cross-roads.

The Nagpur Trench had been one of the German's main communication trenches until their withdrawal to the Hindenburg Line a few days prior. The Green Howards probably used this trench to approach the village and then assembled behind the high ground.

At 05.15 British artillery began shelling the fortifications along the western and south-western edges of the village, so as to soften up the enemy. Shortly after, the British infantry (the Green Howards) began their advance.

The Right Party moved around the Southern edge against little opposition and set up post No 1 at the southern most cross-roads.

The Right Centre Company encountered some opposition but they fought through and set up post No 2 at the cross-roads near No 1 post.

The Left Centre Company under Capt Field, attacked the very highly fortified part of the village along the South-Western side. 2nd Lieut Wright (age 19) was killed (shot in the head) before he reached the village and most of his platoon were also put out of action. Capt Field must have got further because he was later killed (age 22) near the Mairie. All of the other officers of the Left Centre Party had been killed or wounded, so this company understandably failed to achieve it's target, which was to set up post No 3 at the cross-roads at the centre of the village. That is why the supporting company - the reserves commanded by Capt Baron - were called in at an early stage.

The Left Flanking Party commanded by Lieut Robinson reached the crossroads at the North-West corner of the village and set up post No 5 there (possibly to prevent any enemy reinforcements from getting in).

About 30 men of the Left Flanking Party, commanded by 2nd Lieut Herbert Smith, then continued forward to establish post No 4 at the crossroads north of the village. They reached their target and took about 15 prisoners but were immediately pushed back by a German counter-attack. Soon they were surrounded and had to fight their way back through the Germans. Most of the British platoon were killed or wounded. 2nd Lieut Smith was severely wounded in the thigh but managed to get back to post No 5 and thence to a casualty clearing station and to England. He walked with a stick for the rest of his life until his death in July 1968.

Lieut Robinson (from post No 5) then moved into the village (probably behind the German defenders on the South-West edge). With a Stokes mortar he bombarded the Mairie at the central cross-roads, destroying the opposition, and was finally able to establish post No 3 there.

The attack on Hénin was preceded with an Artillery barrage on the Western and south-western edges of the village.

The Battle of Hénin cost each side over 150 casualties and yet it was a mere skirmish, just a prelude to the big battle that would follow a week later. On the 3rd of April 1917 the Green Howards were relieved by the 16th Bn Manchester Regiment, 90th Infantry Brigade, and moved back to billets at Bellacourt where the day was spent cleaning up.

2 Military Crosses were awarded at this battle. 2nd Lieut Herbert Smith was awarded a medal for during the counter attack he "extracted his men with great coolness, himself killing many of the enemy. He has at all times led his men with great courage and confidence." He also prevented the 15 German prisoners form regrouping with the German army. Capt Thomas William Baron was also awarded a military cross "When in command of the support company, he engaged three strong points held by snipers in strength, and in the face of heavy rifle and artillery fire, finally succeeded in capturing the posts." "He set a fine example throughout a most difficult operation."

Retrieved from "https://en.everybodywiki.com/index.php?title=Battle_of_Henin&oldid=863329"
Categories:
Hidden categories:
This page was last edited on 18 July 2020, at 10:01.
This page has been accessed 878 times.
Content is available under License CC BY-SA 3.0 unless otherwise noted.
Privacy policy
About EverybodyWiki Bios & Wiki
Disclaimers
Dark mode