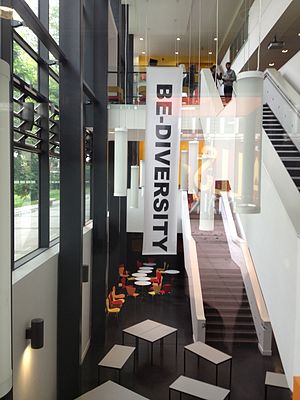 Be-diversity is the degree of variation of being. This can refer to any variation, from physical differentiation to different forma mentis.

The term be-diversity was used for the first time, after one year of research, by contemporary artist Stefano Cagol in the occasion of Critical ways of Seeing [1] symposium at Goldsmiths University of London in May, 2014.

Cagol coined this neologism starting from the term biodiversity.

Be-diversity is the diversity of being. It represents a claim of peculiarity and distinction of individual being and ways of being. The contemporary era has offered unexpected chances to develop the individuality within a global web community increasingly shared, wide, gullible, influenced and tracked,[1] while be-diversity safeguards differences and interaction between different.

Be-diversity is an open term because it can contain a wide range of meanings, it can be applied to a wide range of themes and topics. Stating from this, Stefano Cagol decided to involve the public in a platform connected with the term, but reflecting from a wide point of view. He asked to contemporary art colleagues to respond to 3 questions he took from the web: they are three FAQ asked by global mass to Google. The questions are: 1) how do environmental changes affect populations?, 2) what does threaten bio (and be-) diversity?, 3) why to be normal? A selection of the answers given before and after the symposium have been collected on a map.[2]

The birth of the neologism has been marked by a documented event occurred by Goldsmiths University in London on May 21, 2014: a flag/banner with the term be-diversity in capital letters has been revealed on the NAB New Art Building of Media & Communications Department of Goldsmiths.

Share
Retrieved from "https://en.everybodywiki.com/index.php?title=Be-diversity&oldid=1914786"
Categories:
Hidden category:
This page was last edited on 22 May 2014, at 17:31.
Content is available under License CC BY-SA 3.0 unless otherwise noted.
This page has been accessed 169 times.
Privacy policy
About EverybodyWiki Bios & Wiki
Disclaimers