The Bristol and Avon Association Football League is a football competition based in England. In July 2011 the league expanded to two divisions, the Premier Division and Division One, but has since contracted back to just one division.[1][2] It sits at level 20 of the English football league system,[3][4] making it one of the lowest level leagues in the football pyramid.[5] It is a feeder to the Bristol and District League and is affiliated to the Somerset County FA and Gloucestershire FA. In the 2015–16 season, Little Stoke United were the league champions.

The league was founded as the Bristol Church of England Association Football League in the 1910–11 season. It had three divisions: Simons, St Werburghs and St Marks won the inaugural season's titles.[6] Among the clubs that joined the league in those early years were Avonmouth St Andrews (now known as Avonmouth)[7] and Backwell United.[8] 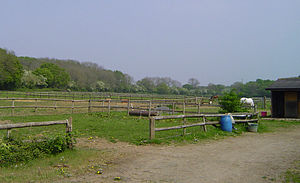 In the 1960s the league had five senior and three junior divisions, in which the youth teams of local Football League clubs Bristol City and Bristol Rovers participated with success.[6] The league obviously comprised many clubs from the city of Bristol itself but there was also solid representation from North Somerset with clubs such as Norton Hill Rangers, Harptree United, Blagdon, Dundry Athletic and Congresbury.[9] There were also a few clubs from South Gloucestershire such as RWP (now known as DRG Stapleton),[10][11]Henfield Youth and Pilning Athletic.[9]

In addition the reserve side of Longwell Green Sports played in the Bristol & Avon League. Sun Life (now known as Cribbs Friends Life)[17][18] along with RWP (now known as DRG Stapleton) have progressed to the Gloucestershire County League.

The league used to hold their meetings in the old Temple Colston School in the centre of Bristol. The meetings were presided over by the late Jack Jenkins, a charismatic and forceful Chairman. Their names live on in the form of the league's cup competitions – the Jack Jenkins Memorial Cup and the Temple Colston Cup.[2]

The early 1960s represented a period of growth for the Bristol Church of England League with the league reaching its zenith in the 1965–66 season when the League Handbook indicates that there were 79 teams in the five senior divisions and 32 teams in the three youth divisions. The league would never again have as many as 111 teams and by the 1966–67 season the competition had already lost one of its youth divisions as the popularity of Sunday football began to increase.

The full constitution for the league, as detailed in the 1965–66 League Handbook, was as follows:

Retrieved from "https://en.everybodywiki.com/index.php?title=Bristol_and_Avon_Association_Football_League&oldid=1049512"
Categories:
Hidden categories:
This page was last edited on 15 October 2020, at 01:17.
This page has been accessed 376 times.
Content is available under License CC BY-SA 3.0 unless otherwise noted.
Privacy policy
About EverybodyWiki Bios & Wiki
Disclaimers