In May 2014, CJ Santos briefly joined 106.7 Energy FM as Prinsipe Pegasus to help promote Digmaan Lusob Mola.[3] He left due to major changes that occurred at the station. 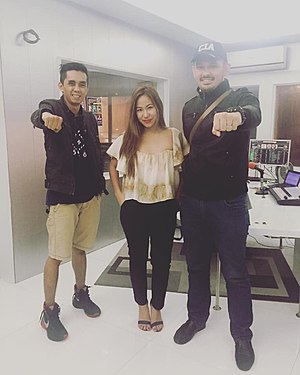 Greco Belgica launches #GrecoLive on DZRJ Voice of the Philippines on July 7, 2016[4] with CJ Santos as Jack Logan.

In 2016, Santos joined Greco Belgica to launch #GrecoLive on DZRJ-AM Radyo Bandido[5] it airs every Tuesdays and Thursday at 7-8pm (Manila time). It was a widely accepted public service program that caters to overseas Filipino Workers and local issues. CJ Santos co-hosted #GrecoLive as Jack Logan.[6][7]

In 2018, Santos starred in the film Simplicity with Solenn Heussaff, Rhian Ramos and Mary Joy Apostol.[8][9]

In June 13, 2017, Santos becomes the Vice President[10] of Tee Radio and partnered with well-known independent Philippine record label Ivory Music and Video for a collaboration on a radio segment entitled It’s Tee Time. To maximize the media platform of this segment, the new show will also be on podcast and vodcast and will be released on Tee Radio’s Facebook page. Ivory Music’s recognition for OPM releases and being the exclusive licensee distributor of Sony Music in the Philippines is sure to create a harmonious project with teen-crazed Tee Radio. [11][12]

In July 26, 2017, Santos created Barangay Teegang[13] to revive Filipino slapstick comedy and introduce a new way of doing so. The show is primarily centered on the friendship of Jeff, Rhodman and Kurt, who were forced to transfer to a new apartment owned by Tita Malou and Don Roman who both claimed ownership to the house and the lot it stands on.[14][15]

Santos also stars as Barangay Teegang's Don Roman, a local gambling chief with his bodyguards Brando and Jumbo, with Bogart, the local bully. Included also is Kap, the local barangay captain, with his trusty tanod, Johnson.[16]

This article "CJ Santos" is from Wikipedia. The list of its authors can be seen in its historical and/or the page Edithistory:CJ Santos. Articles copied from Draft Namespace on Wikipedia could be seen on the Draft Namespace of Wikipedia and not main one.

Retrieved from "https://en.everybodywiki.com/index.php?title=CJ_Santos&oldid=1023602"
Hidden categories:
This page was last edited on 30 September 2020, at 21:27.
This page has been accessed 991 times.
Content is available under License CC BY-SA 3.0 unless otherwise noted.
Privacy policy
About EverybodyWiki Bios & Wiki
Disclaimers