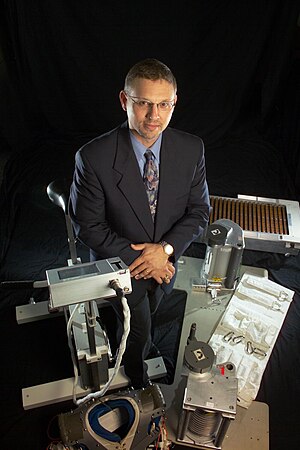 Ortiz Longo was born in San Juan, Puerto Rico where he received both his primary and secondary education. As a child his creative imagination was encouraged by both his parents. His father, Dr. Ortiz, a medical physician, was very influential in his life. He was always fascinated with his son's curiosity and encouraged him to find out how things worked even if it meant taking them apart and putting them back together again.[1]

In 1980, Ortiz Longo enrolled in the University of Puerto Rico at Mayaguez school of engineering. During his third year, while studying mechanical engineering, he came upon an advertisement in his school stating that officials from NASA would be visiting and conducting interviews at the campus. Ortiz Longo responded to the ad and went to the interview. NASA accepted him and offered a him part-time job in the continental United States.[1]

In 1983, he moved to United States and joined NASA as a cooperative education student. He helped train astronauts for the first Spacelab mission which was carried aloft in the Space Shuttle Columbia's payload bay during STS-9.

Earned his Bachelor of Science in Mechanical Engineering from the University of Puerto Rico at Mayagüez in 1984. Inducted to the Engineering Honor Society, Tau Beta Pi. Earned his Master of Science in Material Science and Engineering from the Cullen College of Engineering in 1993. In 1996, Ortiz Longo was part of the Astronaut Selection Program group of 123 finalists (from a pool of 2451 qualified applicants), that interviewed at the Johnson Space Center to become part of Astronaut Class 16. This year, he was also named Space Shuttle Division Chief Engineer for structures, mechanics and materials.

Earned his Doctorate Degree in Material Science and Engineering from the Cullen College of Engineering in 2000. In 2003 he began supporting the Space Station Program as System Manager for the Crew Health Care System (CHeCS).

Among his Professional Publications and Conference Presentations are the following:

Dr. Carlos Ortiz Longo is multilingual in basic Russian, and is fluent in English and Spanish.

His brother, Carlos E. Ortiz Longo (a.k.a. C. Enrique Ortiz), also worked for NASA. He was a Space Shuttle Avionics Software Engineer at IBM, then LORAL, Johnson Space Center, Houston. Both brothers are recipients of NASA's Silver Snoopy Award, and at times, concurrently worked in the Mission Evaluation Room (MER) [8] during Space Shuttle missions at the Johnson Space Center.

His son, Andrés R. Ortiz, a Texas A&M Aerospace Engineer graduate, also works at the Johnson Space Center in Houston as an International Space Station Flight controller for the Station Power, Articulation, and Thermal Control (SPARTAN) team. His other son, Gabriel C. Ortiz is a Medical Doctor, and graduate of the University of Texas Galveston Branch UTMB. He is currenly part of the residency program in Internal Medicine at the Ochsner Health System in New Orleans.

Retrieved from "https://en.everybodywiki.com/index.php?title=Carlos_Ortiz_Longo&oldid=1917610"
Categories:
Hidden categories:
This page was last edited on 19 June 2015, at 11:02.
This page has been accessed 32 times.
Content is available under License CC BY-SA 3.0 unless otherwise noted.
Privacy policy
About EverybodyWiki Bios & Wiki
Disclaimers