"Chances" is a song by American boy band Backstreet Boys. It was released on November 9, 2018, as the second single from DNA, their ninth album (eighth in the US). It was written by Ryan Tedder and Shawn Mendes, and peaked at number seven on the Billboard Bubbling Under 100, number nine on the Dance Club Songs charts, and number 19 on the Adult Top 40.

AJ McLean first met Ryan Tedder while working together on the former's debut studio album Have It All in 2009.[1] He suggested Tedder to send several of his written songs to the Backstreet Boys. One of the songs included "Chances", which the group immediately fell in love with.[2] It was written by the Backstreet Boys, Tedder, Shawn Mendes, Zach Skelton, Fiona Bevan, Casey Smith, Geoff Warburton, and Scott Harris.[3] The single and accompanying music video were simultaneously released on November 9, 2018, following the announcement of the DNA World Tour.[4][5]

In an interview with Billboard, McLean explained that it was similar to their first single "Don't Go Breaking My Heart", but also felt distinct. He stated that it was "more of that realistic love story about chance, to find that person in the most precarious of scenarios. It’s a really beautiful love song."[2] However, member Brian Littrell stated that "both songs are completely different" in an interview with Entertainment Weekly, further acknowledging that the band were "either known for dance songs or something that tugs on your heartstrings".[6]

Fist-pumping synths are used throughout the song, as the band ponder over the chorus, "What are the chances that we’d end up dancing? Like 2 in a million, like once in a life".[7] The song is based on 4
4 common time, the tempo is 110 BPM and is played in the key of B major.[8]

Mike Wass of Idolator described the song as "another irresistible, vaguely retro pop-anthem with a hands-in-the-air chorus and the kind of vocal harmonies that they perfected", and claimed that it would be a big song.[7] Neil Z. Yeung of AllMusic praised "Chances", along with "Don't Go Breaking My Heart", stating that both songs are "some of Backstreet's finest, familiar in their delivery yet with a finger on the mainstream pulse of 2019",[9] while Jon Dolan of Rolling Stone described it as "plaintively throbbing".[10] In a mixed review, Josh Hurst of Flood Magazine referred to "Chances" as "slightly anthemic", but not jarring.[11] 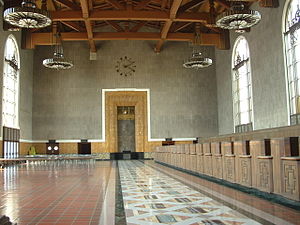 The music video was shot in Union Station, where the dancers performed in the ticket lobby.

The music video was released simultaneously with the digital release of the song on November 9, 2018.[20][21] It was co-directed by McLean and René Elizondo Jr., which was the first video McLean directed for the Backstreet Boys.[2][4] It was filmed inside Union Station while it was still open to the public,[22] and was the first time all five members wore suits during a music video.[2] Elizondo wanted the video to be cinematic and showcase elements of film noir.[22]

Shooting lasted from 2:00pm to 4:00am on September 4, 2019. The dancers featured in the video are Madison Vomastek and Jake Tribus, both students from the Glorya Kaufman School of Dance at the University of Southern California.[23] They were filmed from 3:00pm to 5:00pm, while the Backstreet Boys were designated inside of the train carriage at 3:00am.[22] Both Vomastek and Tribus performed an uninterrupted choreographed sequence that was praised by both the band, their label, and management.[2] As of December 2019, it has over 28 million views on YouTube.[24]

The video begins as a woman runs down the steps of a train station in a Steadicam shot. She helps another woman pick up a bag that she dropped, as a man in front of her misses the train. As she continues to walk by, the man follows her throughout the station until they sit opposite each other on the station seats. The duo perform a dance in the ticket lobby, which they end with a kiss. The video ends as the two sit away from each other on the station seats; the dance sequence was figurative.

The Backstreet Boys appear throughout the video as the events occur. The two people in the station are unaware of their presence, as they are seen behind a pole, inside the moving train, and sitting on the seats adjacent from the two.

The Backstreet Boys performed "Chances" on the 15th season of The Voice on November 13, 2018.[25][26] They also appeared on The Tonight Show Starring Jimmy Fallon in chicken costumes on January 24, 2019 while they performed "Everybody (Backstreet's Back)" on the Manhattan streets and Rockefeller sidewalks,[27][28][29] before performing "Chances" in matching black and gray outfits.[30] The song was also included on the setlist of the DNA World Tour, which supported their studio album DNA.[31]

Retrieved from "https://en.everybodywiki.com/index.php?title=Chances_(Backstreet_Boys_song)&oldid=1018006"
Categories:
Hidden categories:
This page was last edited on 23 September 2020, at 13:14.
This page has been accessed 971 times.
Content is available under License CC BY-SA 3.0 unless otherwise noted.
Privacy policy
About EverybodyWiki Bios & Wiki
Disclaimers