In the music industry, a single is a type of release, typically a song recording of fewer tracks than an LP record or an album. This can be released for sale to the public in a variety of different formats. In most cases, a single is a song that is released separately from an album, although it usually also appears on an album. Typically, these are the songs from albums that are released separately for promotional uses such as digital download or commercial radio airplay and are expected to be the most popular. In other cases a recording released as a single may not appear on an album.

As digital downloading and audio streaming have become more prevalent, it is often possible for every track on an album to also be available separately. Nevertheless, the concept of a single for an album has been retained as an identification of a more heavily promoted or more popular song (or group of songs) within an album collection.

The basic specifications of the music single were set[vague] in the late 19th century, when the gramophone record began to supersede phonograph cylinders in commercially produced musical recordings. Gramophone discs were manufactured with a range of playback speeds (from 16 rpm to 78 rpm) and in several sizes (including 12-inch/30 cm). By about 1910, however, the 10-inch (25 cm), 78 rpm shellac disc had become the most commonly used format.

The inherent technical limitations of the gramophone disc defined the standard format for commercial recordings in the early 20th century. The relatively crude disc-cutting techniques of the time and the thickness of the needles used on record players limited the number of grooves per inch that could be inscribed on the disc surface, and a high rotation speed was necessary to achieve acceptable recording and playback fidelity. 78 rpm was chosen as the standard because of the introduction of the electrically powered, synchronous turntable motor in 1925, which ran at 3600 rpm with a 46:1 gear ratio, resulting in a rotation speed of 78.26 rpm.

With these factors applied to the 10-inch format, songwriters and performers increasingly tailored their output to fit the new medium. The 3-minute single remained the standard into the 1960s, when the availability of microgroove recording and improved mastering techniques enabled recording artists to increase the duration of their recorded songs. The breakthrough came with Bob Dylan's "Like a Rolling Stone". Although CBS tried to make the record more "radio friendly" by cutting the performance into halves, and separating them between the two sides of the vinyl disc, both Dylan and his fans demanded that the full six-minute take be placed on one side, and that radio stations play the song in its entirety.[2] 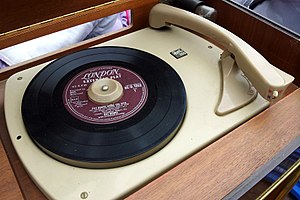 45 rpm EP on a turntable, ready to be played

The most common form of the vinyl single is the 45 or 7-inch. The names are derived from its play speed, 45 rpm, and the standard diameter, 7 inches (18 cm).

The 7-inch 45 rpm record was released 31 March 1949 by RCA Victor as a smaller, more durable and higher-fidelity replacement for the 78 rpm shellac discs.[3] The first 45 rpm records were monaural, with recordings on both sides of the disc. As stereo recordings became popular in the 1960s, almost all 45 rpm records were produced in stereo by the early 1970s. Columbia Records, which had released the ​33 1⁄3 rpm 12-inch vinyl LP in June 1948, also released ​33 1⁄3 rpm 7-inch vinyl singles in March 1949, but they were soon eclipsed by the RCA Victor 45. The first regular production 45 rpm record pressed was "PeeWee the Piccolo" RCA Victor 47-0146 pressed 7 December 1948 at the Sherman Avenue plant in Indianapolis, R.O. Price, plant manager.[4] The first release of the 45 came 29 March 1949 in seven translucent colors, one for each type of music: dark blue 52-xxxx light classics series, light blue 51-xxxx international series, yellow 47-xxxx juvenile series, bright red (cerise) 50-xxxx folk series, deep red 49-xxxx classical series, green (teal) 48-xxxx country series, and black 47-xxxx popular series. Except for the 47 series these series started with 0000. 50-0000 (Arthur Crudup), 51-0000 (Meisels), 52-0000 (Al Goodman)[5] The claim made that 48-0001 by Eddy Arnold was the first 45 is evidently incorrect (even though as of this writing 48-0000 has not turned up) since all 45s were released simultaneously with the 45 player on the 29 March date. There was plenty of information 'leaked' to the public about the new 45 rpm system through front page articles in Billboard magazine on 4 December 1948 and again on 8 January 1949. RCA was trying to blunt the lead Columbia had established in releasing their ​33 1⁄3  LP system back in June 1948.[6]

Although 7 inches remained the standard size for vinyl singles, 12-inch singles were introduced for use by DJs in discos in the 1970s. The longer playing time of these singles allowed the inclusion of extended dance mixes of tracks. In addition, the larger surface area of the 12-inch discs allowed for wider grooves (larger amplitude) and greater separation between grooves, the latter of which results in less cross-talk. Consequently, they are less susceptible to wear and scratches. The 12-inch single is still considered a standard format for dance music, though its popularity has declined in recent years.

A video single is a music single in the form of a videotape (mostly VHS, but occasionally Betamax, and/or Video 8), LaserDisc, and DVD. In 1983, British synthpop band The Human League released the first commercial video single called The Human League Video Single[7] on both VHS and Betamax. It was not a huge commercial success due to the high retail price of £10.99, compared to around £1.99 for a 7" vinyl single.

Physical singles continued declining[when?] in the United States, and many record companies stopped releasing them altogether to concentrate more on album sales. Since the establishment of the Billboard Hot 100, singles were not eligible to enter the chart unless they were available to purchase as a physical single. By the late 1990s, several popular mainstream hits never charted on the Hot 100. No Doubt's 1996 hit "Don't Speak" spent 16 weeks at number one on the Hot 100 Airplay chart, but it never charted on the Billboard Hot 100. On 5 December 1998, Billboard changed the rule to allow airplay-only songs onto the chart. Aaliyah's "Try Again" (2000) was the first single ever to reach number one on the Billboard Hot 100 based solely on radio airplay.[8]

A radio single is also referred as an "airplay single",[9] especially by Billboard.[10] A song is considered a single by the time the label officially releases the song to radio (known as "Impact Date" or "Radio Date").[11][12][13]

The internet era introduced music download and streaming, which make it possible for every track on an album to also be available separately. Nevertheless, the concept of a single for an album has been retained as an identification of a more heavily promoted or more popular song within an album collection. The demand for music downloads skyrocketed after the launch of Apple's iTunes Store (then called iTunes Music Store) in January 2001 and the creation of portable music and digital audio players such as the iPod.

The sales of singles are recorded in record charts in most countries in a Top 40 format. These charts are often published in magazines and numerous television shows and radio programs count down the list. In order to be eligible for inclusion in the charts the single must meet the requirements set by the charting company, usually governing the number of songs and the total playing time of the single. 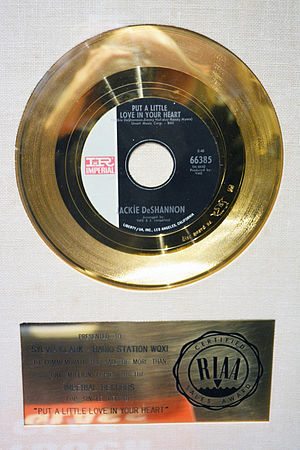 The single of "Put a Little Love in Your Heart" was a hit record for Jackie DeShannon in 1968. It was certified Gold in the United States when it sold more than 1,000,000 copies.

In popular music, the commercial and artistic importance of the single (as compared to the EP or album) has varied over time, technological development, and according to the audience of particular artists and genres. Singles have generally been more important to artists who sell to the youngest purchasers of music (younger teenagers and pre-teens), who tend to have more limited financial resources. Perhaps the golden age of the single was on 45s in the 1950s to early 1960s in the early years of rock music.[3] Starting in the mid-sixties, albums became a greater focus and more important as artists created albums of uniformly high quality and coherent themes, a trend which reached its apex in the development of the concept album. Over the 1990s and early 2000s, the single generally received less and less attention in the United States as albums, which on compact disc had virtually identical production and distribution costs but could be sold at a higher price, became most retailers' primary method of selling music. Singles continued to be produced in the UK and Australia, surviving the transition from compact disc to digital download.

The discontinuation of the single has been cited as a major marketing mistake by the record companies considering it eliminated an inexpensive recording format for young fans to use to become accustomed to purchasing music. In its place was the predominance of the album which alienated customers by the expense of purchasing an expensive format for only one or two songs of interest. This in turn encouraged interest in file sharing software on the internet like Napster for single recordings initially which began to seriously undercut the music recording market.[17]

Dance music, however, has followed a different commercial pattern, and the single, especially the 12-inch vinyl single, remains a major method by which dance music is distributed.

Single sales in the United Kingdom reached an all-time low in January 2005, as the popularity of the compact disc was overtaken by the then-unofficial medium of the music download.[18] As a result, downloads were gradually introduced into the UK Singles Chart from April 2005 to January 2007. Sales gradually improved in the following years, reaching a record high in 2008 and that further being overtaken in 2009, 2010 and 2011.[19] Portable audio players, which make it extremely easy to load and play songs from many different artists, are claimed to be a major factor behind this trend.

A related development has been the popularity of mobile phone ringtones based on pop singles (on some modern phones, the actual single can be used as a ringtone). In September 2007, Sony BMG announced they would introduce a new type of CD single, called "ringles", for the 2007 holiday season. The format included three songs by an artist, plus a ringtone accessible from the user's computer. Sony announced plans to release 50 ringles in October and November, while Universal Music Group expected to release somewhere between 10 and 20 titles.[20]

In a reversal of this trend, a single has been released based on a ringtone itself. The Crazy Frog ringtone, which was a cult hit in Europe in 2004, was released as a mashup with "Axel F" in June 2005 amid a massive publicity campaign and subsequently hit #1 on the UK charts.

The term single is sometimes regarded as a misnomer, since one record usually contains two songs: the A-side and B-side. In 1982, CBS marketed one-sided singles at a lower price than two-sided singles.[21]

On 17 April 2005, Official UK Singles Chart added the download format to the existing physical CD singles. Gnarls Barkley was the first act to reach No.1 selling downloads alone in April 2006. It was released physically the following week. On 1 January 2007 digital downloads (including unbundled album tracks[22][23]) became eligible from the point of release, without the need for an accompanying physical.[24]

Share
Retrieved from "https://en.everybodywiki.com/index.php?title=Single_(music)&oldid=270921"
Categories:
Hidden categories:
This page was last edited on 25 December 2018, at 06:23.
Content is available under License CC BY-SA 3.0 unless otherwise noted.
This page has been accessed 1,654 times.
Privacy policy
About EverybodyWiki Bios & Wiki
Disclaimers