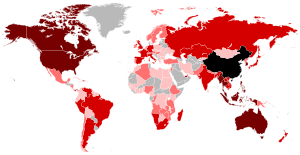 Countries with a significant population with Chinese ancestry.

Chinese people are the various individuals or ethnic groups associated with China, usually through ancestry, ethnicity, nationality, citizenship, or other affiliation.[1]

The Han Chinese are the largest ethnic group in China, comprising approximately 92% of its mainland population.[2] Han Chinese people also comprise approximately 95%, 92%, 89% and 74% of the population of Taiwan, Hong Kong, Macau and Singapore respectively.[3][4][5][6][7][8]

They are also the world's largest ethnic group, comprising approximately 18% of the global human population.[9][10]

Outside of China, the terms "Han Chinese" and "Chinese" are often conflated since those identifying or registered as Han Chinese are the dominant ethnic group in China.[11][12] There are 55 officially-recognized ethnic minorities in China who may also identify as "Chinese".

People from Taiwan, officially the Republic of China (ROC), may also be referred to as "Chinese" in various contexts, though they are usually referred to as "Taiwanese". The territory of Taiwan is disputed and the ROC has limited recognition of its sovereignty.

There is also an extensive Chinese diaspora known as Overseas Chinese. 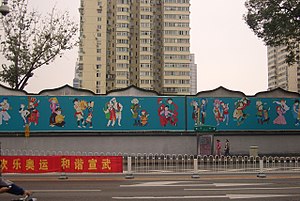 A number of ethnic groups within China, as well as people elsewhere with ancestry in the region, may be referred to as Chinese people.[13]

Han Chinese people, the largest ethnic group in China, are often referred to as "Chinese" or "ethnic Chinese" in English.[11][12][14] The Han Chinese also form a majority or notable minority in other countries, and they comprise approximately 18% of the global human population.[9][10]

Other ethnic groups in China include the Zhuang, Hui, Manchus, Uyghurs, and Miao, who make up the five largest ethnic minorities in mainland China, with populations of approximately 10 million or more. In addition, the Yi, Tujia, Tibetans and Mongols each have populations between five and ten million.

During the Qing dynasty the term "Chinese people" (Chinese: 中國之人 Zhōngguó zhī rén; Manchu: Dulimbai gurun i niyalma) was used by the Qing government to refer to all traditionally native subjects of the empire, including Han, Manchu, and Mongols.[15]

Zhonghua minzu (simplified Chinese: 中华民族; traditional Chinese: 中華民族; pinyin: Zhōnghuá Mínzú), the "Chinese nation", is a supra-ethnic concept which includes all 56 ethnic groups living in China that are officially recognized by the government of the People's Republic of China. It includes established ethnic groups who have lived within the borders of China since at least the Qing Dynasty (1644–1911).[16] The term zhonghua minzu was used during the Republic of China from 1911–1949 to refer to a subset of five ethnic groups in China.[17] The term zhongguo renmin (Chinese: 中国人民), "Chinese people", was the government's preferred term during the life of Mao Zedong; zhonghua minzu is more common in recent decades.[18] 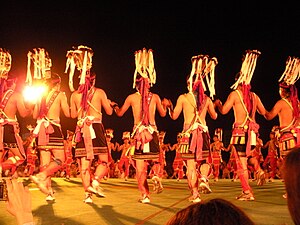 The Amis people are an indigenous Taiwanese ethnic group.

Meanwhile, the so-called Mainlanders (Taiwanese) are mostly descended from people who migrated from mainland China to Taiwan during the 1940s and 1950s, usually in the context of the Second World War, Second Sino-Japanese War, and Chinese Civil War. They are often referred to in Taiwanese Mandarin as "Waishengren" (meaning "people from outside of this province"). The Mainlanders (Taiwanese) comprise approximately 14% of Taiwan's total population.

Recognition by the Chinese government[edit] 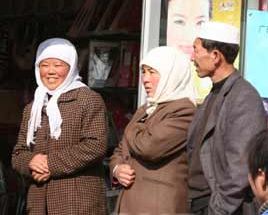 Overseas Chinese refers to people of Chinese ethnicity or national heritage who live outside the People's Republic of China or Taiwan as the result of the continuing diaspora.[24] People with one or more Chinese ancestors may consider themselves overseas Chinese.[25] Such people vary widely in terms of cultural assimilation. In some areas throughout the world ethnic enclaves known as Chinatowns are home to populations of Chinese ancestry.

In Southeast Asia, Chinese people call themselves 華人 (Huárén), which is distinguished from (中國人 Zhōngguórén) or the citizens of the People's Republic of China or the Republic of China.[26] This is especially so in the Chinese communities of Southeast Asia. The term Zhongguoren has a more political or ideological aspect in its use; while many in China may use Zhongguoren to mean the Chinese ethnicity, some in Taiwan would refuse to be called Zhongguoren.[27]

Other articles of the topics Australia AND China : AMS Cloting, Ltd.

For countries with significant populations

Other countries with Chinese populations

Share
Retrieved from "https://en.everybodywiki.com/index.php?title=Chinese_people&oldid=1121206"
Categories:
Hidden categories:
This page was last edited on 14 November 2020, at 18:06.
Content is available under License CC BY-SA 3.0 unless otherwise noted.
This page has been accessed 974 times.
Privacy policy
About EverybodyWiki Bios & Wiki
Disclaimers