Download books of Chris Valentino or buy them on amazon

Born in Waterbury, Connecticut, the second of two children.

After high school, he studied film and television at NYU Film School Tisch School of the Arts where his work garnered recognition at the First Run Film Festival. While attending the university, Valentino began his professional career with the launch of the History Channel creating on-air marketing and promotion campaigns.

In April 2000, he began working as a writer and producer for the Creative Group. While there he was influential in the development of original content creation for numerous brands including Time Warner Cable, Johnson & Johnson and the international horror company Fangoria. Valentino created numerous original programs for Fangoria TV and helped initiate the launch of Fangoria Radio with Dee Snider and his friend Debbie Rochon.

In November 2005, he completed production of the independent film Brooklyn Lobster[1] presented by Martin Scorsese and starring Danny Aiello and Jane Curtin. The film was directed by NYU classmate and friend Kevin Jordan The film garnered critical acclaim from Roger Ebert of the Chicago Sun-Times and Variety magazine. It was an official selection at the Toronto International Film Festival

In February 2007, Chris Valentino directed the first of its kind patient awareness documentary Innerstate for Johnson & Johnson's Centocor Inc. Innerstate premiered on February 21, 2007, at the Directors Guild of America Theater in New York, NY.[2] Throughout the course of the premiere and local screenings, Innerstate attracted the attention of national and regional media including The New York Times,[2] CNBC, The Philadelphia Inquirer, Boston Herald, The Dallas Morning News and The Atlanta Journal-Constitution.[citation needed] In addition, the film enjoyed a strong presence in patient blogs and forums as well as on YouTube where thousands have viewed the trailer.[citation needed]

The National Psoriasis Association approved of the film, calling it "a great way to get the word out about the disease" and "fair and balanced". They had previously distributed a film, My Skin's on Fire by Fred Finkelstein, which was part-financed by another pharmaceutical company, Genentech.[2]

As press became aware that the film was supported by Centocor, Inc., initial coverage focused on skepticism surrounding the pharmaceutical industry and whether this documentary might be a veiled attempt at direct-to-consumer advertising.[citation needed] Following the premiere and several screenings in cities throughout the country, the focus of the media coverage shifted to the personal stories of the subjects in the film, as well as the millions of people living with similar chronic diseases.[citation needed]

In August 2007, he wrote and directed the Showtime documentary Vargas Vs Mayorga: Countdown to the Brawl. The boxing showcase profiled boxing's prolific and notorious fighters Fernando Vargas and Ricardo Mayorga. 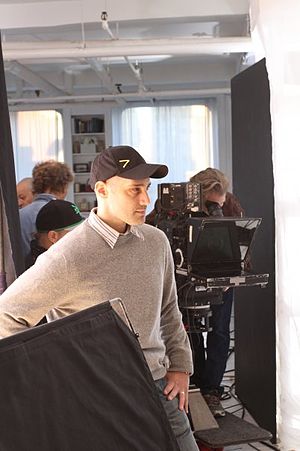 Producer Director, Valentino on the set of the Wellness Series Fit in Your Skin hosted by celebrity trainer, nutritionist Jackie Warner for Johnson & Johnson

Producer Director, Valentino on the set of the Wellness Series Fit in Your Skin hosted by celebrity trainer, nutritionist Jackie Warner for Johnson & Johnson 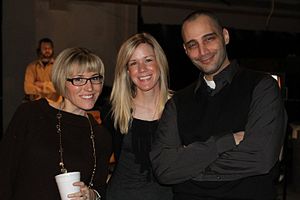 Producer Director, Valentino on the set of the Wellness Series New Way RA hosted by Deborah Norville for Johnson & Johnson

In December 2008, he co-founded Motive NYC the digital brand building company. The launch of the company brought about several online campaigns including "New Way RA" hosted by Deborah Norville which featured Clinton Kelly of TLC's What Not to Wear and Ellie Krieger of Food Network and "Fit in Your Skin" the wellness campaign hosted by nutritionist and fitness expert Jackie Warner. Motive continued to develop digital campaigns and applications such as the McDonald's/Coca-Cola Fountain Joy app as well as various motion graphics projects for TV broadcast such as House Hunters International, History Channel's Battles BC, HBO's Russel Simmons presents shows and numerous programs for MTV, HGTV and Travel Channel.

Retrieved from "https://en.everybodywiki.com/index.php?title=Chris_Valentino&oldid=874123"
Categories:
Hidden categories:
This page was last edited on 20 July 2020, at 09:39.
This page has been accessed 179 times.
Content is available under License CC BY-SA 3.0 unless otherwise noted.
Privacy policy
About EverybodyWiki Bios & Wiki
Disclaimers