A city at sea is an idea that a large ship can serve as a city. 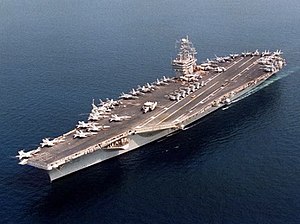 Various types of ships resemble walking cities in function and in scope. Seacraft are the largest vehicles ever built by humans, and the only ones that have reached a scale compatible with Ron Herron's original concept of walking cities.

Aircraft carriers are the only modern device closely resembling a city at sea in concept or scope. An American Nimitz-class aircraft carrier holds just under six thousand crewmen and is over a fifth of a mile long. An aircraft carrier could be considered a city at sea whose primary resource or function is that of an aircraft maintenance, supply and launching center which moves about the globe fulfilling its function where it is most needed while stopping occasionally for resupply (Glassco, 2004).

The world's largest cruise liners are also equipped to hold thousands of people, with all the amenities of modern life - including shopping malls, ice rinks, radio and television stations and wedding chapels; however, they are not intended for the extended living that military vessels such as aircraft carriers are.

After audacious projects such as the Freedom Ship have failed, the only serious attempt to emulate a floating city is Seasteading, which aims to create permanent dwellings at sea, outside the territories claimed by the governments of any standing nation.

Retrieved from "https://en.everybodywiki.com/index.php?title=City_at_sea&oldid=874840"
Categories:
Hidden category:
This page was last edited on 20 July 2020, at 11:31.
This page has been accessed 60 times.
Content is available under License CC BY-SA 3.0 unless otherwise noted.
Privacy policy
About EverybodyWiki Bios & Wiki
Disclaimers
Mobile view