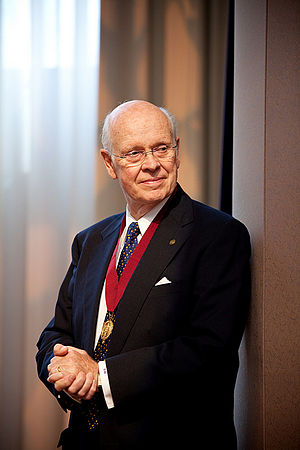 Founder of the National Society of High School Scholars,[4] Nobel is an advocate of humanitarian and environmental causes,[1] and was honored at the Artivist Film Festival in November 2007 for his work in these areas.[5] He is also Chief Mentor to Cogent EMR Solutions, a company dedicated to research and development of Electromagnetic Radiation (EMR) safety products and services.

In 1974 he drafted The Nobel Laureates Declaration on the Survival of Mankind, signed by 78 Nobel Laureates advocating support for environmental protection and humanitarian leadership. Nobel has received a number of honors and awards, including the Clifford Messinger Memorial Award granted by the Nature Conservancy for his environmentalism.

You have to Sign in or create an account to comment this article !
Retrieved from "https://en.everybodywiki.com/index.php?title=Claes_Nobel&oldid=874907"
Categories:
Hidden categories:
This page was last edited on 20 July 2020, at 12:57.
This page has been accessed 29 times.
Content is available under License CC BY-SA 3.0 unless otherwise noted.
Privacy policy
About EverybodyWiki Bios & Wiki
Disclaimers
Mobile view