In sports, a coach is a person involved in the direction, instruction and training of the operations of a sports team or of individual sportspeople. A coach may also be a teacher.

The original sense of the word coach is that of a horse-drawn carriage, deriving ultimately from the Hungarian city of Kocs where such vehicles were first made. Students at the University of Oxford in the early nineteenth century used the slang word to refer to a private tutor who would drive a less able student through his examinations just like horse driving.[citation needed]

Britain took the lead in upgrading the status of sports in the 19th century. For sports to become professionalized, "coacher" had to become established. It gradually professionalized in the Victorian era and the role was well established by 1914. In the First World War, military units sought out the coaches to supervise physical conditioning and develop morale-building teams. [1]

A coach, particularly in a professional league, is usually supported by one or more assistant coaches and specialist support staff. The staff may include coordinators, strength and fitness specialists, and trainers. In elite sport, the role of nutritionists, biomechanists and physiotherapists will all become critical to the overall long-term success of a coach and athlete. They work on the over all responsibility of their athletes.

‹ The template below (Globalize) is being considered for merging. See templates for discussion to help reach a consensus. ›
Main article: Manager (association football) 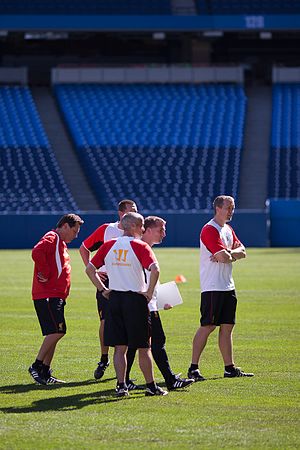 In association football, the duties of a coach can vary depending on the level they are coaching at and the country they are coaching in, amongst others. In youth football, the primary objective of a coach is to aid players in the development of their technical skills, with emphasis on the enjoyment and fair play of the game rather than physical or tactical development.[2] In recent decades,[when?] efforts have been made by governing bodies in various countries to overhaul their coaching structures at youth level with the aim of encouraging coaches to put player development and enjoyment ahead of winning matches.

In professional football, the role of the coach or trainer is limited to the training and development of a club's "first team" in most countries. The coach is aided by a number of assistant coaches, one of which carries the responsibility for the training and preparation of the goalkeepers. The coach is also assisted by medical staff and athletic trainers. The medium to long term strategy of a football club, with regard to transfer policies, youth development and other sporting matters, is not the business of a coach in most football countries.[citation needed] The presence of a sporting director is designed to give the medium term development of a club the full attention of one professional, allowing the coach to focus on improving and producing performances from the players under their charge.[3] The system also provides a certain level of protection against overspending on players in search of instant success. In football, the director of a professional football team is more commonly awarded the position of manager, a role that combines the duties of coach and sporting director.

In baseball, at least at the professional level in North America, the individual who heads the coaching staff does not use the title of "head coach", but is instead called the field manager. Baseball "coaches" at that level are members of the coaching staff under the overall supervision of the manager, with each coach having a specialized role. The baseball field manager is essentially equivalent a head coach in other American professional sports leagues; player transactions are handled by the general manager. The term manager used without qualification almost always refers to the field manager, while the general manager is often called the GM.

At amateur levels, the terminology is more similar to that of other sports. The person known as the "manager" in professional leagues is generally called the "head coach" in amateur leagues; this terminology is standard in U.S. college baseball.

Sports coaching in the UK follows a highly structured pattern in principle, but is delivered by a workforce which is largely volunteer-based. Recognising the pivotal role played by coaches in increasing participation and performance in sport, each of the UK's Home Country Sports Councils has a coaching strategy aligned to their overall strategy.

In June 2008, the Sports Councils together with the national governing bodies of sport (NGBs) formally adopted the UK Coaching Framework at the UK Coaching Summit in Coventry.

More than thirty sports have their coach education programmes endorsed as meeting the standards of the UK Coaching Certificate (UKCC) as an indication of quality assurance. Typically, such programmes classify coaches within Levels 1–4, with Level 2 being the minimum standard for someone to coach unaccompanied. Coach education programmes are usually organised centrally by the NGBs but delivered locally to meet the needs of volunteer coaches. For anyone wanting to become a coach in a particular sport, the NGB website provides the first point of contact for further information.

Each of the counties in England has a County Sports Partnership (CSP) funded by Sport England which supports local coaching networks to bring coaches from different sports together to share best practice and gain further continuing professional development (CPD). Similar arrangements exist across Northern Ireland, Scotland and Wales.

The UK government, through DCMS, highlighted the need for detailed research into sports coaching patterns. As a result, major tracking studies have been completed. These confirm that three in every four coaches are volunteers, typically giving up three hours a week to coach their sport. Fewer than 5% of coaches in the UK are full-time professionals, in stark contrast to the USA.

Left: A U.S. high school girls' water polo team (with their male coaches in background) posing with their trophy. Right: A U.S. university girl practicing a difficult gymnastics manoeuvre under the watchful eyes of her coach.

All major U.S. collegiate sports have associations for their coaches to engage in professional development activities, but some sports' professional coaches have less formal associations, without developing into a group resembling a union in the way that athletic players in many leagues have.

U.S. collegiate coaching contracts require termination without the payment of a settlement if the coach is found to be in serious violation of named rules, usually with regard to the recruiting or retention of players in violation of amateur status.

The NFL head coaches have an association, called NFL Coaches Association (NFLCA), which includes all the coaches in the NFL, except New England Patriots head coach Bill Belichick.

Many coaching contracts allow the termination of the coach with little notice and without specific cause, usually in the case of high-profile coaches with the payment of a financial settlement. Coaching is a very fickle profession, and a reversal of the team's fortune often finds last year's "Coach of the Year" to be seeking employment in the next. Many coaches are former players of the sport themselves, and coaches of professional sports teams are sometimes retired players.

On some teams, the principal coach (usually referred to as the head coach) has little to do with the development of details such as techniques of play or placement of players on the playing surface, leaving this to assistants while concentrating on larger issues such as recruitment and organizational development.

Successful coaches often become as well or even better-known than the athletes they coach, and in recent years[when?] have come to command high salaries and have agents of their own to negotiate their contracts with the teams. Often the head coach of a well-known team has his or her own radio and television programs and becomes the primary "face" associated with the team.

Both the collegiate and professional-level coaches may have contracts for millions of dollars a year. The head coach at the professional level has more time to devote to tactics and playbooks, which are combed over by staff that are usually paid more than at the college level. The pro level head coaching, due to the extensive time on the road and long hours, is a very stressful job. Since the money is good at high levels, many coaches retire in their early fifties. Also, professional staffs are not limited in the number of assistants which can be hired, NCAA Division I FBS teams are limited to nine full-time assistant coaches.

Many factors are part of NFL coaches' contracts. These involve the NFL's $11 billion as the highest-revenue sport in North America, topping Major League Baseball's (MLB) $7 billion, while holding a non-taxpaying exemption that the MLB does not. The unusual distinction of being a tax-exempt multibillion-dollar corporation and a tax-exempt monopoly[5] that can move teams from one city to another, is combined with stadiums sometimes built through tax-free borrowing by the cities, which every American taxpayer pays for in public subsidies.[6] The NFL's coaches are the highest-paid professional coaches[7] with professional football topping the list in Forbes' highest-paid sports coaches. Bill Belichick was[when?] in the top spot for the second year in a row[8] with no MLB or National Hockey League coaches making the list.

Another major element of NFL coaches' contracts, negotiated between individual coaches and NFL "teams" and owners, are NFL-demanded provisions in the coaches' employment contracts, that authorize the employing NFL teams to withhold part of a coach's salary when league operations are suspended, such as during lockouts or television contract negotiations.[9]

Coaches also often create game plans, or instructions for what their players will do during the game. For every sport, there are different game plans.[12] For example, in association football, the coach may choose to have a goalkeeper, four defenders, four midfielders, and two forwards. However, a coach may also choose to have a goalkeeper, four defenders, three midfielders, and three forwards. It is up to the coaches to decide how many players will play a certain position at a time, as long as they do not surpass the maximum number of players allowed on the playing field at one time. It is also up to the coaches to decide where and when a certain player is going to play.

Retrieved from "https://en.everybodywiki.com/index.php?title=Coach_(sport)&oldid=740851"
Categories:
Hidden categories:
This page was last edited on 25 May 2020, at 14:47.
Content is available under License CC BY-SA 3.0 unless otherwise noted.
This page has been accessed 667 times.
Privacy policy
About EverybodyWiki Bios & Wiki
Disclaimers