From EverybodyWiki Bios & Wiki
Jump to:navigation, search
Not to be confused with Cabrio coach. 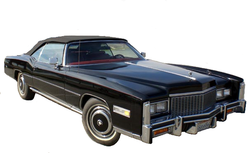 The "last" American convertible, a 1976 Cadillac Eldorado. This was the only US built convertible available in 1976. Cadillac made a big deal out of this, and sold 14,000 of them, making them the most common Eldorado convertible in history.

Sales of convertibles began to decline in the late 1960s and took a sharp downturn by the early 1970s. Chrysler Corp produced its last convertible in 1971, Ford was done by 1973 and GM stopped all convertible production except Cadillac by 1975. By 1976 GM was done as well.

A December 1973 article in Road & Track magazine explains the fall of the convertible in a very data-rich and scientific manner. The article does not blame government mandates or safety concerns for making the convertible too expensive or impossible to continue to build. Rather, it suggests that buyer tastes have changed, making the convertible a less attractive option for new car buyers. Some reasons listed were:

A hardtop with convertible styling

The article showed the slow decline in sales of the convertible from the mid-sixties into the seventies, compared to the hardtops of the same model. Sales were down because few buyers decided a convertible was the right car for them.

The last American convertible to come out of the factory was the 1976 Cadillac Eldorado. It was advertised to be the end of an era, and all indications at the time seemed to corroborate that. Convertibles were not built by mainstream U.S. automobile manufacturers again until 1982. Only a few 2-seat sporty European import convertibles remained for the American market.

Rise of the coachbuilt convertible[edit]

American car manufacturers stopped making convertibles in-house in 1976. As fewer and fewer convertibles remained available to U.S. buyers (mid-1970s to mid-1980s), an aftermarket cottage industry grew for new cars to be converted into convertibles because there were still buyers who wanted them. The few European convertibles that were available was not enough to placate demand. Everything from Firebirds to Celicas, Continentals to Cutlass Cieras were modified into convertibles. Tens of thousands of cars were converted by several dozen coachbuilders across the country.

Why were they called coachbuilders? Because it was a big job, and these modern cars did not have enough structural integrity to withstand the loss of the roof structure. The coachbuilder would have to re-engineer the structure of the car, often adding hundreds of pounds of steel, prior to removing the roof and fitting the convertible mechanism. They would then have to make new interior and exterior trim for all the places that they had to cut, and make it look, feel, and drive like it was meant to be a convertible. It would also have to be safe. It was no small task. Coachbuilding was a trade that had been around for centuries. Before there were cars, there were horse-drawn coaches, and they were all made by hand. With the advent of the automobile, the coachbuilders adapted to the changing times, and made bodies for cars. These car bodies were made by hand, out of wood and later steel, and mounted on to the automobile frame. The coachbuilder would be responsible for the interior as well. Eventually car companies started making their own pressed steel bodies. The only remaining market for coachbuilders was the very expensive cars like Duesenburgs, Rolls Royces, and the biggest Packards. This work eventually died down too, but there would always be coachbuilders around. The firm of Mulliner Park Ward, for example, would build Corniche bodies for Rolls Royce and Bentley until 1995. Most modern day coachbuilders are in the business of modifying car bodies. They modify cars into hearses, ambulances, flower cars, stretch limousines, and of course convertibles.

These coachbuilding companies often marketed to new car dealerships, but they usually did not work for, or in conjunction with the car manufacturer. There were exceptions, however. American Sunroof Company (ASC), a company which has converted over 1,000,000 cars,[1] has had official relationships with many car companies. ASC's products are of such high quality that many manufacturers retain them to create convertibles. The volume of convertible sales is low enough that these manufacturers can't justify the cost of tooling up their own factories to make convertibles in-house like they used to. For example, General Motors sold Camaro and Firebird Convertibles from 1987 to 1992, which were sold in Chevrolet and Pontiac dealerships. In this case, it was handled in two different ways. Some of them were sold as regular production "factory convertibles." GM handled the logistics of these "factory" conversions and sold the cars to dealers under the RPO system (regular production option). Even though the car was bought from Chevrolet directly as a convertible, it was in fact a converted car, and had a placard from the coachbuilder in the doorjamb.

Sometimes GM chose not to offer RPO convertibles. For example, in 1987, when the first RPO Camaro ragtops became available, Pontiac wanted to have Firebird ragtops too, but they were so heavy that they would have raised Pontiac's CAFE (Corporate Average Fuel Economy) number too high. To get around this problem, they were sold as coachbuilt special editions, and as such, their increased fuel consumption would not be figured into Pontiac's CAFE number. Everything was done the same as the RPO Camaros except the paperwork. Instead of ordering a convertible directly from GM, the dealer would order the car as a t-top. It would be drop shipped to the coachbuilder, and converted right alongside the regular production Camaros, which had also been built as t-top cars originally. So it is a subtle distinction, the only real difference being who got billed for the work, (the dealer or the manufacturer) and whether or not it was included in the CAFE calculations. It was win-win. Customers got their convertibles and Pontiac got their low CAFE rating. Pontiac eventually redesigned the Firebird, reducing fuel consumption enough to offer their own RPO convertibles in 1991.[2]

A new-car dealership could contract with any aftermarket company to add any option they wanted to add to a car, as long as it did not compromise the structural integrity or cause warranty problems on that car. Options like roof-racks, sunroofs, leather interiors, spoilers, rustproofing and all sorts of things could be done to a new car, even if the car manufacturer had nothing to do with that product or conversion. The conversion van phenomenon is a very similar process. The convertible conversion was billed as a dealer option that was ordered by the new car dealership (or could be ordered privately if you already owned the car) just like rustproofing or custom pinstriping could be ordered for a car by the dealership. As far as a car manufacturer was concerned, as long as the car was converted in a way that did not negatively compromise the car to cause warranty problems, then the new car dealership could do, or have done, whatever they wanted to do. These conversions are not considered OEM or factory options. Conversions done before the final sale to the consumer, for/by the new car dealership are considered dealer options. All coach convertible conversions sold directly to the private car owner are considered "aftermarket" conversions.

Return of the factory convertible[edit]

As the coachbuilt convertible cottage industry continued to grow, it became obvious to the car manufacturers that it was again time for them to produce new convertibles. For the 1982 model year, the Chrysler LeBaron, Dodge 400 and Buick Riviera convertibles were available to new car shoppers as a factory option. The Ford Mustang, Chevy Cavalier & Pontiac Sunbird followed for the 1983 model year, and the Cadillac Eldorado & Toyota Celica followed for 1984. Even though these new factory convertibles were offered by the manufacturer, they were still built as hardtops, then shipped to a coach company for modification into a convertible. The cars were then sent to dealerships by the original manufacturer. Even though the conversion process was the same, because these convertibles were provided to the dealership directly from the car manufacturer, they are considered factory original. In time, the car manufacturers were able to return the actual construction and engineering of some of its convertibles back to the factory. Companies like American Specialty Cars continue to build convertibles for manufacturers, both with soft tops and with retractable hard tops. They are responsible for the Toyota Camry Solara convertible and BMW Z3, as well as countless others.[3]

Below, is a complete listing of nearly all cars converted by the U.S. coach convertible industry from the mid-1970s into the 1990s. This list does not include kit car conversions or one-off conversions. All are believed to have been series runs and no ultra-expensive cars are included.

Conversions of Chrysler and AMC products[edit]

Conversions of Japanese products (for the U.S. market)[edit]

Conversions of European products (for the U.S. market)[edit]

Conversions for the Australian market[edit]

Note: all of the above conversions were deemed to be a dealer option and were sold new through selected Toyota and Mitsubishi Dealers in Australia 1982-1984. All carried full new car warranties.

Conversions for the European market[edit]

Share
Retrieved from "https://en.everybodywiki.com/index.php?title=Coach_convertible&oldid=875602"
Categories:
Hidden categories:
This page was last edited on 20 July 2020, at 17:13.
Content is available under License CC BY-SA 3.0 unless otherwise noted.
This page has been accessed 2,206 times.
Privacy policy
About EverybodyWiki Bios & Wiki
Disclaimers