In 2003, Vanderby formed Cosmic Nomads with Michael Smith (bassist from Scandal and later The Atlantics), Wayne Davison (drums and more recently tribute band Santana Magic), Rod Brogan (guitar, vocals). Together, they recorded the band's debut retro single and album called Make Love, Not War, a slogan taken from the counterculture of the 1960s cultural movement. Sebastian Chase's MGM Distribution: The Groove Merchants, the label Ray was signed to many years earlier, distributed the single in Australia and the band played gigs throughout the Sydney Indie music scene.

In 2004 the band released the EP Dreamin' about you on Majique Records, which was owned by Vanderby. The line-up at the time consisted of Vanderby, Julian Child, Paul Jones, Veit Mehler and Stefan Caroleo.[4] 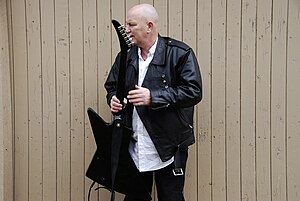 In 2008, Ray Vanderby moved to Orange New South Wales.[8] In 2010, Cosmic Nomads signed a worldwide distribution agreement with Blue Pie Records and Blue Pie Productions USA to re-release all 3 albums for digital distribution. In 2011, Ray Vanderby reformed Cosmic Nomads, and with this new line-up he has written 10 songs for a 4th album. The album Damage will be released in 2012[needs update] through the band's own Majique Music[9][10] record label. According to the band, each song has a special meaning reflecting the sentiment of the album title and Vanderby's turbulent years of substance abuse and broken marriages.[11]

Retrieved from "https://en.everybodywiki.com/index.php?title=Cosmic_Nomads&oldid=877034"
Categories:
Hidden categories:
This page was last edited on 21 July 2020, at 05:17.
This page has been accessed 564 times.
Content is available under License CC BY-SA 3.0 unless otherwise noted.
Privacy policy
About EverybodyWiki Bios & Wiki
Disclaimers