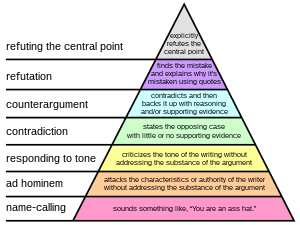 Criticism cowardice increases towards the bottom of Graham's Hierarchy of Disagreement. 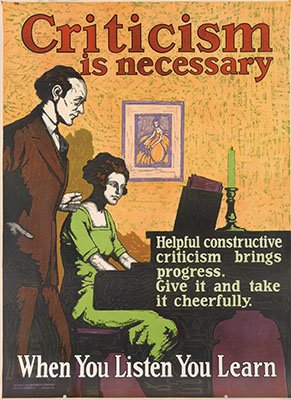 A criticism coward (or criticism wimp) is an individual whose ability to handle criticism is poor.

Such usually reacts to legitimate criticism of their behaviour and/or work with one or more of the following: Neglect and ignorance, blocking, denial and distractions such as strawman arguments, weaponized logic-terminating buzzwords[note 1] and rhetoric tools such as argumentum ad hominem, gossip, slander[1] and possibly gaslighting, rather than rational and logical counter arguments and sincere civil discourse.

Other techniques commonly invoked by criticism cowards to evade criticism are red-herring, sophisms and rabulism.

Retrieved from "https://en.everybodywiki.com/index.php?title=Criticism_coward&oldid=1134635"
Categories:
This page was last edited on 20 November 2020, at 08:38.
This page has been accessed 548 times.
Content is available under License CC BY-SA 3.0 unless otherwise noted.
Privacy policy
About EverybodyWiki Bios & Wiki
Disclaimers