The name Maha was provided by Oman.[2] 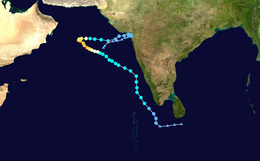 A well-marked low pressure area located off the coast of India in the Arabian Sea intensified into a depression on October 30.[3].The system moved northwestwards into an area of more favorable environment conditions and intensified into a Cyclonic Storm on November 1. Maha continued to intensify, fluctuating in intensity for the next 2 days as it moved along the Indian coast, producing rough surf and moderate coastal flooding along the way before becoming a Very Severe Cyclonic Storm on November 3 and then into an Extremely Severe Cyclonic Storm the next day as it moved parallel to the Indian coast. Maha began to stall in the Arabian Sea as it reached peak intensity due to a lack of steering currents. Upwelling began to take its toll on the storm, and it weakened back to a Cyclonic Storm as it approached Gujarat. It then made landfall near Gujarat as a depression and quickly weakened afterwards.

Orange alert was issued in four districts of Kerala. [5]

Four warships of the Western Naval Command have been loaded with HADR relief materials. Naval units of the Gujarat Naval Area are also prepared with Emergency Response Teams equipped with underwater diving equipment and inflatable boats.

In addition, naval aircraft and helicopters are also on standby to undertake any survey and air rescue operations. Naval authorities in Gujarat are in constant liaison with civil authorities to ensure seamless coordination.

Cyclone 'Maha', is expected to make landfall near Veraval by the night of 6 Nov as a Cyclonic Storm with winds of the order of 35 - 40 Knots. Consequently, rough to very rough sea conditions are likely to effect East Central Arabian Sea and heavy rain with thunder and lightning is expected to effect South Gujarat and North Maharashtra areas.

•'Maha' is expected to hit the Tamil Nadu, with a maximum sustained wind speed of 70-80 kilometres per hour.

Severe cyclonic storm 'Maha' is expected to make landfall on the Gujarat coast near the Union Territory of Diu on Thursday, and will cause rainfall in parts of Maharashtra and Goa over the next two days.The India Meteorological Department (IMD) was on Tuesday quoted by reports as saying that Cyclone Maha, reportedly named by Oman, was forming over the east-central and west-central areas of the Arabian Sea, adding that it is likely to move rapidly towards the east-northeast while weakening further. The cyclone was initially categorised as an 'extremely severe cyclonic storm'.

Retrieved from "https://en.everybodywiki.com/index.php?title=Cyclone_Maha&oldid=603806"
Categories:
Hidden categories:
This page was last edited on 8 January 2020, at 14:18.
This page has been accessed 1,677 times.
Content is available under License CC BY-SA 3.0 unless otherwise noted.
Privacy policy
About EverybodyWiki Bios & Wiki
Disclaimers