Daddy Hezekiah (born October 11) is a renowned Nigerian Christian clergy and philanthropist. He is the founder and leader, Living Christ Mission Inc., and Chancellor, Hezekiah University, Umudi, Nigeria. Daddy Hezekiah is the builder of two magnificent temples at the headquarters of Living Christ Mission Inc., both with capacities of 75,000 (Onitsha, Anambra State) and 55,000 (Nkwerre, Imo State), respectively.

Since the creation of man, besides the gift of Jesus Christ the Saviour, there has not been any other rare and unique gift to mankind except Daddy Hezekiah. The uniqueness of Daddy Hezekiah is beyond human comprehension. In all respect and conditions His Grace, The Most Rev. Prof. Daddy Hezekiah, he stands out as a personality with rare qualities representative of God Almighty on earth, holy, consecrated, unassuming, resolute, an anointed prophet and Oracle of God of the first order.

A renowned philanthropist, personality, highly honoured, recongnized and sought after by all men of goodwill from all walks of life. Aside from being a man of God, his compassion and mercy are matchless. He is a beacon of hope and a reliable compass to believers in a world gone adrift. Born to the family of Late Nze Amadi Obadiah Onukogu, a lay magistrate and London trained police officer, and Madam Mary Onukogu (Nee Okanu), both of Umulowe Umugara Nkwerre in Nkwerre Local Government Area, Imo State, Nigeria.

The personality, greatness and exploits of Daddy Hezekiah did not happen magically. It was an ordered event by the Lord and played out according to the timing and regulation of God Almighty. While in Zambia as an undergraduate of Industrial Chemistry, he was the Chairman, University of Zambia Christian Fellowship, a post he held to his final year and therefore created the record of being the first foreign student to hold such post and even held it to his final year. Still as a student, he converted lecturers and his fellow students especially those from North Africa who believed so much in magic and occultic powers.

Before returning to Nigeria, in November, 1979, the young Victor Onukogu, as was known was addressed then was invited to the Zambian State House by then President His Excellency, Dr. Kenneth Kaunda, where Daddy Hezekiah (Victor Onukogu) prayed for him, his cabinet and the entire Zambia nation. The president could not contain his emotions and love for the young Nigerian graduate and he advised him thus “Victor, this good thing you brought to my country, I urge you to take it back to Nigeria”. Daddy had plum job offers in Zambia, but as a patriotic Nigerian, he was bent on returning home.

In 1980, he returned to Nigeria and was posted to Inland Girls’ Secondary School, Onitsha, Anambra State for the one-year mandatory National Youth Service Corps Scheme (NYSC). There, he prayed and raised the dead, cured all manner of diseases. He destroyed charms, shrines, and deadly gods and goddesses. He cancelled bad destinies. In 1983, he founded Living Christ Mission Inc. worldwide and it was incorporated in 1985.

He refurbished (Isiokwe Police Station) in Onitsha, Onitsha North Local Government Area, Anambra State and handed same over to the Nigerian Police in 1999. Equally, he made the highest financial contribution for the rebuilding of a mosque shattered by bomb blast in Onitsha, Anambra State of Nigeria. He also made the highest donation for the building of the International Ecumenical Centre, in Abuja, Federal Capital Territory, during President Olusegun Obasanjo’s administration.

In April 2000, he refurbished the Nigerian Union of Journalists (NUJ) Press Centre, Owerri, Imo State, which is named after him. Daddy Hezekiah runs a scholarship scheme that carries over one thousand people (1,000) every year from primary to university and even to doctoral degree levels. Scores of widows have had houses built for them free of charge by Daddy Hezekiah and other less privileged persons have received care and many have had their medical bills paid for them in several hospitals in Nigeria and beyond by Daddy Hezekiah with bills running into millions of naira. He built two great temples of 75,000 seating capacity in Onitsha, Anambra State and 55,000 seating capacity in Nkwerre, Imo State, singlehandedly. The third one, 45,000 seating capacity is under construction in Owerri, Imo State.

He also established Hezekiah University, Umudi, Imo State, without receiving foreign, state or local aids. He further set historical precedence when he awarded the first set of students at the University a scholarship of N100,000 each, while the 2nd sets of students N80,000 and 3rd set N65,000 respectively.

Daddy Hezekiah also rebuilt and remodeled the Department of Political Science, University of Nigeria, Nsukka to the tune of about N15,000,000 (fifteen million naira), in addition to the scholarship awarded to some indigent non-members of Living Christ Mission studying at the University. 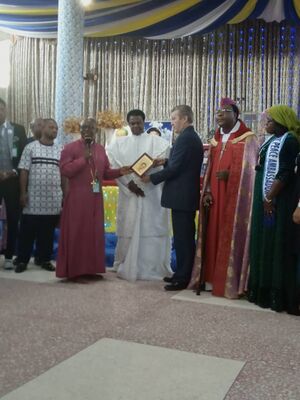 Daddy Hezekiah (L), IAWPA President, Per Stefson (M) during the award of International Mayor of Peace

Daddy Hezekiah has received awards, honours and investitures numbering over one thousand and notable among them are: 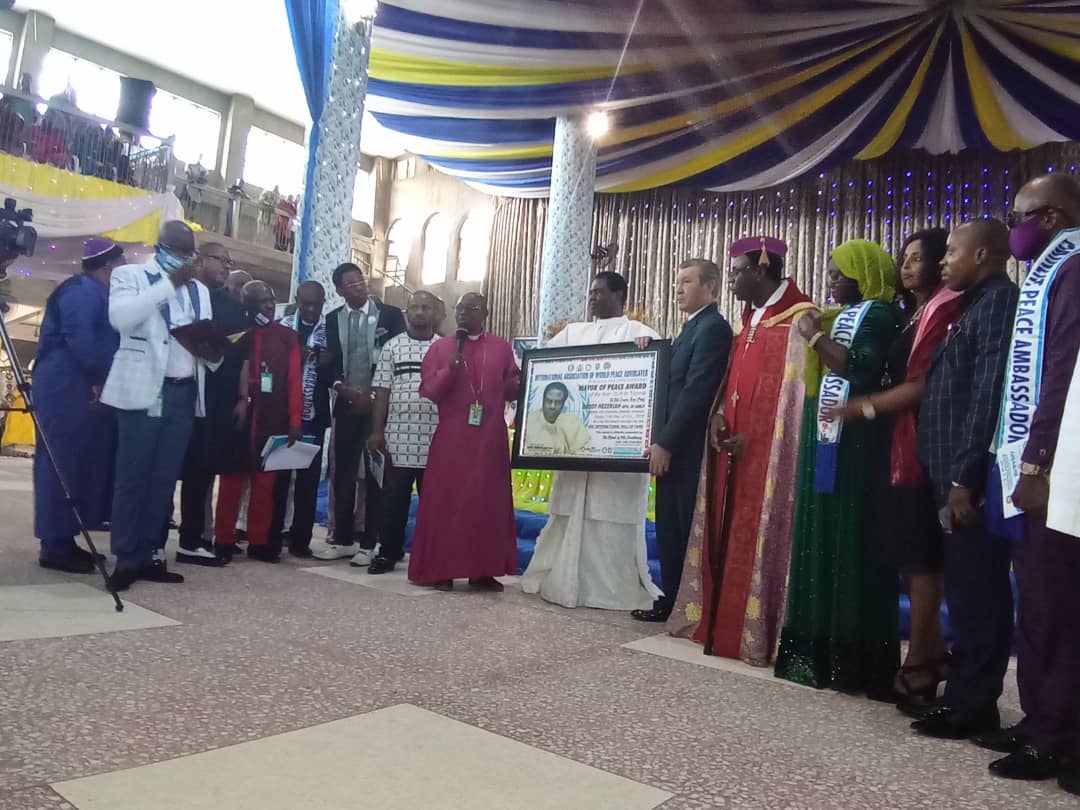 Retrieved from "https://en.everybodywiki.com/index.php?title=Daddy_Hezekiah&oldid=1051602"
Category:
Hidden categories:
This page was last edited on 16 October 2020, at 12:58.
This page has been accessed 358 times.
Content is available under License CC BY-SA 3.0 unless otherwise noted.
Privacy policy
About EverybodyWiki Bios & Wiki
Disclaimers
Mobile view