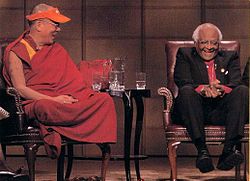 The Dalai Lama /ˈdɑːlaɪ ˈlɑːmə/[3][4] is a religious figure in Tibetan Buddhism. He is its highest spiritual teacher of the Gelugpa school. A new Dalai Lama is said to be the reborn old Dalai Lama. This line goes back to 1391. The 14th and current Dalai Lama is Tenzin Gyatso.

The current Dalai Lama is His Holiness Tenzin Gyatso.

The 13th Dalai Lama, Thubten Gyatso, expelled all Chinese civilians from the country, and instituted many measures to modernise Tibet.[5] These included provisions to curb excessive demands on peasants and tax evasion by the nobles, setting up an independent police force, the abolishment of the death penalty, extension of secular education, and the provision of electricity throughout the city of Lhasa in the 1920s.[6] Thubten Gyatso died in 1933.

The 14th Dalai Lama was not formally enthroned until 17 November 1950, during the People's Republic of China invasion of Tibet (1950–1951). Fearing for his life, the 14th Dalai Lama fled to India where he has led a government-in-exile since.[7][8] With the aim of launching guerrilla operations against the Chinese, the Central Intelligence Agency funded the Dalai Lama $1.7 million a year in the 1960s.[9] In 2001, he gave up his absolute power over the government to an elected parliament of selected Tibetan exiles. His original goal was full independence for Tibet, but by the late 1980s, he was seeking high-level autonomy instead.[10] He is still seeking greater autonomy from China, although Dolma Gyari, deputy speaker of the parliament-in-exile has stated "If the middle path fails in the short term, we will be forced to opt for complete independence or selfdetermination as per the UN charter".[11]

This article "Dalai Lama" is from Simple English Wikipedia. The list of its authors can be seen in its historical and/or the page Edithistory:Dalai Lama.

Share
Retrieved from "https://en.everybodywiki.com/index.php?title=Dalai_Lama&oldid=2072766"
Categories:
Hidden categories:
This page was last edited on 17 September 2021, at 11:40.
Content is available under License CC BY-SA 3.0 unless otherwise noted.
This page has been accessed 250 times.
Privacy policy
About EverybodyWiki Bios & Wiki
Disclaimers