His international performance career received recognition in 2006, when he was invited to perform at the Burj Al Arab in front of the Prime Minister of the United Arab Emirates. He formally coached and performed a fire act in the Cirque du Soleil show “Zaia” 2008-2012 and performed a lead character in the show, the Shaman.[1]

He is recognised as a world specialist in OH&S regarding fuels for fire performance, handheld special effects and handheld pyrotechnics. Dan has performed, coached and consulted in 45 countries worldwide.[2] 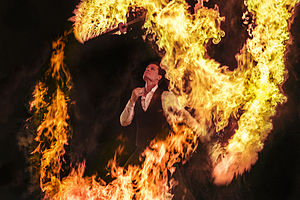 His special skills include the fire dancing apparatus of swords, double staffs, poi, ropes and long staff. His style is contemporary focusing on body presentation, high energy movements and close body technical fire manipulation.[3] He is currently the only fire performer known to use 'Dragons Breath' Fire Swords.

Dan started martial arts, dancing and fire performance at a young age. However, his interests lay more in arts than in competition. Festivals were his first exposure to performing for large crowds and creatively combining prop and body movement to music.[4]

After high school he formed his own performing arts company and successfully bid for national and international performance contracts.[5] After establishing his business with solo, duo and group performances in the Middle East, Europe and Asia, both under his own company Pyroptix and with the renowned FlameOz,[6][7][8][9] he moved away from an organisational role and back to focusing on his own performance development.

In 2008 he was accepted into Phoenix Productions[10] based in Vienna, where he trained and performed with their performing arts coaches. Dan's double fire swords routine developed into a world-class technically original skill based on power jumps and close tracing of fire across his chest and back while executing acrobatic moves such as aerial cartwheels. His work with Phoenix Productions led to performances in 38 cities across 5 continents.[11]

In 2010 He created a fire duet with Stephanie Höggerl for Resorts World Sentosa[4] and Universal Studios in Singapore presenting 180 fire shows and 60 aerial shows in 10 weeks. His company Pyroptix was rebranded as Spark Fire Dance in 2011.

In 2010 Cirque du Soleil signed Dan as their first Australian fire artist, to perform in the production of Zaia in the Venetian Macau.[5] He is currently the only contemporary firedance artist on any Cirque du Soleil show. 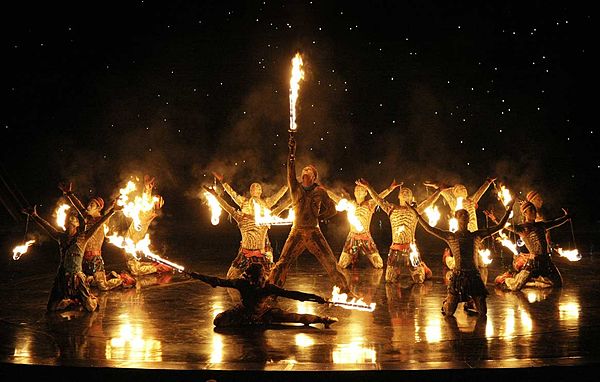 Dan has performed with and for celebrities and royalty across the world.

Retrieved from "https://en.everybodywiki.com/index.php?title=Dan_Miethke&oldid=879008"
Categories:
Hidden categories:
This page was last edited on 21 July 2020, at 14:07.
This page has been accessed 270 times.
Content is available under License CC BY-SA 3.0 unless otherwise noted.
Privacy policy
About EverybodyWiki Bios & Wiki
Disclaimers
Mobile view