David Fravor (born c. 1965) is a retired naval pilot and Commander of VFA-41 also known as "The Black Aces". He is one of the primary witness in the 2004 USS Nimitz UFO incident.[1] He was featured in the 2008 PBS documentary Carrier[2] and has been interviewed on Joe Rogan's podcast The Joe Rogan Experience.

Fravor joined the military at the age of 17. He has a career spanning 24 years, 18 of which was as a Navy pilot. He had completed five tours to the Persian Gulf starting after Operation Desert Storm.[3] He commanded a squadron of 12 airplanes consisting of 330 people. Fravor retired in 2006.[4] 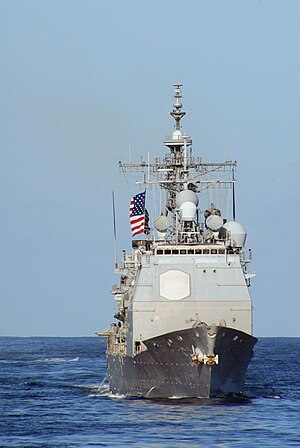 Prior to the incident, in early November 2004, the Ticonderoga-class guided missile cruiser USS Princeton, part of Carrier Strike Group 11, started recording intermittent radar tracks on an advanced AN/SPY-1B passive scanning phased array radar.[5][6] Thinking the brand new radar was malfunctioning, the Princeton sailors restarted and recalibrated the system but the tracks became sharper and clearer.[7] On or around 10 November, Navy Chief Petty Officer (E-7) Kevin Day, stationed on Princeton, noticed groups of five to 10 radar traces that were travelling southwards in a loose though fixed formation at 28,000 feet (8,500 m) in the immediate vicinity of Catalina and San Clemente islands.[7] He was startled by their slow speed of 100 knots (190 km/h; 120 mph) at such an altitude,[7] but received confirmation of their presence from radar operators on other vessels.[citation needed] The returns continued showing up continuously for almost a week, with sailors observing something moving erratically in the distance through the ship's magnified binoculars.[7]

On November 14, 2004, Fravor was a primary witness to the USS Nimitz UFO incident. His crew consisted of 4 members which was called to investigate an unidentified fly object flying off the coast of San Diego while they were on a training exercise. The incident was recorded by Chad Underwood who also coined the term "Tic Tac" UFO to describe the UFO. The radio operator Princeton instructed the pilots to change their course and investigate the unidentified radar spot observed by Princeton's own radar.[6] An E-2C Hawkeye airborne early warning (AEW) aircraft in flight at the time was contacted to conduct the intercept but the signals could only be detected after Princeton sent them coordinates and were too faint to obtain a precise target track.[8][7] A radio operator on Princeton asked the pilots if they were carrying operational weapons, to which the pilots replied that they were not.[6] The weather conditions for that day showed excellent visibility with a blue sky, no cloud cover, and a calm sea.[9]

The Navy pilots reached the intercept location without any contact on their new APG-73 radars.[8] They looked down at the sea and also noticed a turbulent oval area of churning water with foam and frothy waves "the size of a Boeing 737 airplane"[10] with a smoother area of lighter color at the center, as if the waves were breaking over something just under the surface.[10] A few seconds later, they noticed an unusual object hovering with erratic movements at a height they estimated to be about 50 feet (15 m) above the churning water. Both Fravor[11] and Slaight later described the object as a large bright white Tic Tac, 30 to 46 feet (9.1 to 14.0 m) long, with no windshield nor porthole, no wing nor empennage, and no visible engine nor exhaust plume.[12][11][13][14]

Fravor began a circular descent to approach the object.[10] As Fravor further descended, he reported that the object began ascending along a curved path, maintaining some distance from the F-18, mirroring its trajectory in opposite circles.[10][11] Fravor then made a more aggressive maneuver, plunging his fighter to aim below the object, but at this point the UFO apparently accelerated and disappeared in less than two seconds, leaving the pilots "pretty weirded out".[10][14]

Subsequently, the two fighter jets began a new course to the combat air patrol (CAP) rendezvous point. "Within seconds" Princeton radioed the jets that a radar target had appeared 60 miles (97 km) away at the predetermined rendezvous point. According to Popular Mechanics, a physical object would have had to move greater than 2,400 miles per hour (3,900 km/h) to reach the CAP ahead of the Navy fighters. Their jets have a maximum speed of Mach 1.8 (1,190 miles per hour (1,920 km/h)). To actually get there "within seconds" would have required an air speed of at least 42,000 miles per hour (68,000 km/h). Two other jets went to investigate the new radar location, but "By the time the Super Hornets arrived [...] the object had already disappeared." Both F-18s then returned to Nimitz.[6] Commander Fravor reflected on his sighting: "I have no idea what I saw. It had no plumes, wings or rotors and outran our F-18s. But I want to fly one."[5]

In a 2017 interview with the Washington Post he stated "It was a real object, it exists and I saw it" and when asked what he believes it was he speculated it was "something not from the Earth."[15]

In May 2019, Fravor was a featured speaker at the "UFOfest" in McMinnville, Oregon. Fravor and UFO conspiracy theorist Bob Lazar reportedly "spent a lot of time comparing notes", and Fravor has speculated the UFO used "gravity propulsion" claimed by Lazar to be part of a US government coverup of alien technology.[16] In October that same year, Fravor was featured on The Joe Rogan Experience.[17]

Fravor had been a long time skeptic of UFO being extraterrestrial in nature. His said his newfound fame was disturbing. Fravor told VICE News believes the technology "was far beyond the technology that we have".[18] In an interview he noted that he does not want to be associated with the aliens claims.[19]

Other skeptics consider that while unexplainable and interesting, these videos are not proof the object in question is extraterrestrial in nature. There are technical reasons for the Navy not to release more information to the public including classified specifications and limitations of military equipment. Possibilities include a plane filmed with camera movement artefacts giving the impression of sudden acceleration. Shermer reminds: "Extraordinary claims require extraordinary evidence".[20]

Share
Retrieved from "https://en.everybodywiki.com/index.php?title=David_Fravor&oldid=994351"
Categories:
Hidden categories:
This page was last edited on 2 September 2020, at 02:19.
Content is available under License CC BY-SA 3.0 unless otherwise noted.
This page has been accessed 8,897 times.
Privacy policy
About EverybodyWiki Bios & Wiki
Disclaimers