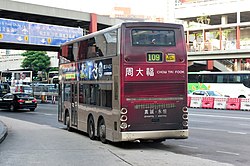 The Trident 3 chassis was developed from Dennis Lance. It had a longitudinally-mounted rear engine, with a radiator mounted on the right hand side of the engine. An auxiliary axle was mounted behind the second axle to cope with the weight at the rear and reduce the rear overhang.

The engines used for these double-decker buses were all manufactured by Cummins. Earlier models use the M11-305E, a 305 hp engine which complies with Euro II standards, or an ISM-330 330 hp engine for the buses delivered to North America.

The first Trident 3 chassis was delivered to Alexander in late 1996 and received a body with the front resembled to R-type design. It was retained by Dennis as a development vehicle.[1] In 2005, it was converted to open top and sold for promotion of British newspaper The Sun. The prototype was sold to a buyer in Hong Kong and arrived Hong Kong in October 2019.

The other 5 were all delivered to Hong Kong, two went to Kowloon Motor Bus and three to Citybus.

The assembly of the first Trident for Hong Kong was finished in February 1997. It has an Alexander ALX500 bodywork and had Kowloon Motor Bus (KMB) air-conditioned bus livery. However, Dennis reserved this bus for tests initially.

The second prototype was finished and delivered to Hong Kong in May 1997, also having an ALX500 body and the KMB air-conditioned bus livery. When it arrived Hong Kong, it was repainted with a golden colour. A red line indicating the floor of bus compartment was added, with people-like figures (designed with computers) situated just above the red line. This decoration work was for the purpose of showing that this bus is a "Super-low-floor" bus, which has better accessibility for passengers. The bus was assigned for several open activities for promotion before getting licensed in September 1997. It entered service two months later and had been in service on route 1A before being reallocated in 2005.

KMB adopted the class code ATR for Trident 3, which would also be used to number the production models.

The first prototype was delivered to Hong Kong later and entered service in 1999, with fleet number ATR101, meaning it is the 101st Trident 3 registered under KMB.

For the first batch, KMB purchased 186 Tridents for its local services, and another 150 for the new Hong Kong International Airport services under the name of Long Win Bus.

All 336 buses of this batch are 12 metres in length. The KMB batch is assorted with Alexander and Duple Metsec bodies, while the entire Long Win batch is Alexander-bodied. Furthermore, 25 of the Long Win Tridents were built with coach standard, and are used for express services into the airport.

KMB adopted the code ATR for its own Tridents, and assigned the code LW for the Long Win batch with ordinary standard (The numbering of LW class starts from 11, continuing from the 10 Volvo Olympians acquired by Long Win earlier in 1997). The coaches were assigned with the fleet code LWA.

The next batch of Tridents for KMB consists of 160 Duple Metsec-bodied productions.

The first 50 of them have a length of 10.6 metres (the code ATS was being assigned for them), and entered service between late 1999 and 2000. These buses are the last batch of KMB buses fitted with plastic route number and destination displays.

The next 110 of them are again 12 metres in length, and fitted with electronic route displays (This became the standard of all future buses bought by KMB).

Another 50 Alexander-bodied 10.6m Tridents entered KMB fleet in 2001. These Tridents' Alexander bodies were of a modified model, and all of them have electronic route displays. Two of them were experimentally fitted with Cummins ISMe Euro III standard engines and have special livery.

The last batch for KMB consists of 150 Alexander-bodied Tridents. These buses are fitted with electronic displays and Cummins ISMe Euro III standard engines, and have their bodies similar to the last 10.6-metre batch.

50 of the Tridents are 10.6 metres long, while the other 100 are 12 metres long. However, the order of 12 metres long Tridents was revised later and only 80 of them were ordered finally. The remaining 20 became the later TransBus Enviro500.

It was soon found that Long Win did not get expected ridership and was in an excess of buses, so from 1999, 20 Tridents of Long Win were leased to KMB. 14 of them were officially acquired by KMB in December 2002, and the rest were returned to Long Win by 2005.

Both KMB and Long Win have some of their Tridents withdrawn prematurely due to fire. Long Win lost one [Fleet number 197 (HT7970)] in July 1999 and got a replacement a year later. This replacement was Duple Metsec-bodied and with electronic displays, and received the fleet number 301 (JV7629).

One KMB Alexander-bodied Trident [Fleet number ATR6 (HV6943)] was destroyed by fire accidentally on 27 November 2002. The accident was caused by the leakage of flammable liquid brought by a passenger into the engine compartment. The bus was officially written off in the following year.

Starting from August 2015, KMB withdrew the first Dennis Trident 3s out of service.

Citybus's Trident fleet was not the largest, but often considered with greatest variety.

After KMB's first Trident was introduced, Citybus also had its prototype Tridents. The first prototype for Citybus was fleet-numbered as 2100. Having a Duple Metsec DM5000 body with coach specifications, it was introduced in November 1997.

The second and third prototypes were with ordinary bus specifications, and got their licenses one month after the first. The second prototype was fitted with Alexander ALX500 bodywork while the third was fitted with a Duple Metsec body. They got fleet numbers 2200 and 2201 respectively, in order to distinguish from the "coach" standard model.

The production batches of Citybus Tridents entered service between 1997 and 1999.

For the coach standard branch, 11 Alexander-bodied Tridents entered service in late 1997, followed by 50 Duple Metsec-bodied examples. Numbered after the first prototype, their fleet numbers were 21-prefixed. All these buses were used for "Cityflyer" express services into Airport, although the Alexander-bodied frames are often substituted for semi-coaches described below. Fleet numbers 2101 and 2102 were later repainted in a special livery and reserved for route E22A.

The first batch of 22-prefixed production Tridents are often considered as "semi-coaches", as they have higher seat standards. A total of 60 semi-coaches entered service in 1998 to 1999 (although one of them stayed in Britain until its final delivery in 2000), while the following 40 (The last two were essentially 23-prefixed) were considered as ordinary standard buses.

Citybus also purchased the first 10.6m Trident 3 built by Dennis, which has Duple Metsec semi-coach body. It was introduced in 1999 with fleet number 2700. This bus retired at 27th of April, 2017.

In 2003, Citybus acquired 9 buses from NWFB and numbered them as 2302 to 2310, following its own production batch. They were fitted with luggage racks in the lower deck in 2007 to facilitate the introduction of new cross-border routes B3 and B3X from Tuen Mun via the Hong Kong–Shenzhen Western Corridor.

Eleven Citybus Dennis Trident 3 buses were withdrawn due to fire and traffic accidents between the years 2010 and 2015, and was replaced by Alexander Dennis Enviro500s. The coach standard buses began withdrawal when the Alexander Dennis Enviro500 MMC was introduced in June 2013 and 10 were sold to New Lantao Bus and Kwoon Chong Motors for usage on Lantau Island due to the requests of double deckers.

It was rumoured that China Motor Bus (CMB) had thought about purchasing ten Tridents in late 1996, but due to unpredictable delivery time Condors were bought instead. When New World First Bus won China Motor Bus's franchise in early 1998, plan was put forward of buying Tridents. Between 1999 and 2015, Tridents had accounted for over 50% of buses in NWFB's fleet. All of them have been fully withdrawn by 2020. 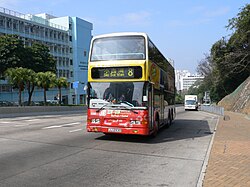 The second NWFB batch entered service throughout 1999 as well as early 2000.

NWFB adopted a policy of purchasing shorter variations of Tridents in its second batch. 50 buses of this batch were still 12 metres in length (30 with Alexander ALX500 bodywork, and 20 with Duple Metsec bodies), but all others have a shorter length.

A slightly later batch of 40 Tridents (Fleet numbers 3301-3340) were fitted with specially-designed Duple Metsec bodywork. They were 10.3 m (34 ft) in length and 4.17 m (13.7 ft) in height, about a feet lower than standard models. These buses were designed for both height and length restrictive road conditions in the hills of Hong Kong Island, including the ones leading to The Peak. These buses' fleet numbers originally included an "L" (for Low height) at the end, but removed some years later.

A 10.6m Trident prototype (Fleet number 3601) was acquired by NWFB in 2000, but the next Trident batch came only two years later. 41 Tridents with Euro III standard engines entered NWFB in 2002. 21 of them were of Alexander-bodied 12m version, while the other 20 were 10.3m special editions. Essentially, the last special edition buses are also the last of Duple Metsec-bodied Tridents.

NWFB's expansion in its early years proved to be too fast, and redundancy grew up fairly quickly. Many of its buses were sold elsewhere in order to achieve better utilisation. Nine 12-metre Tridents in the last batch (fleet number 1201-1209) were transferred to Citybus in 2003, only one year after their entry of service.

53 Tridents were transferred to the bus division of KCRC starting in 2004. All of them were shorter Alexander-bodied versions, with forty-seven 10.6m ones and six 11.3m ones.[2]

KCRC introduced twenty-two 11.3m Tridents (601-622) in 2000, as an expansion of the company's bus services.[3] They were the first Tridents to be fitted with modified Alexander ALX500 bodywork.

All Tridents from KCRC has been retired by 2017.

In 1999, BC Transit of British Columbia, Canada, became the first North American transit agency to use double-decker transit buses, ordering 11 Dennis Tridents with Duple Metsec DM5000 bodywork assembled by Alexander. As one of them was damaged in transit, only ten of them reached BC, where they were allocated to the Victoria Regional Transit System in Victoria (being assigned fleet numbers 9001-9010) and entered service in 2000.[4]

In 2002, BC Transit ordered a further 19 Dennis Tridents, also with Duple Metsec DM5000 bodywork, one of which was meant to replace the Trident from the previous batch damaged in transit. The first 16 (vehicles 9021-9036) were allocated to Victoria from the outset, while the last three were originally allocated to Kelowna Regional Transit System based in Kelowna (as vehicles 0251-0253) and later transferred to Victoria in 2009 (and renumbered as 9037-9039). 9036 was briefly loaned to GO Transit in Ontario as a demonstration vehicle in May 2002.

BC Transit was the only North American operator to order transit-type Trident 3s, before the model was discontinued and replaced with the Enviro500.

A SBS Transit 12m Trident 3 in Singapore. This bus was withdrawn earlier due to an accident in early 2017.

In 1998, Singapore Bus Services ordered 20 Dennis Trident 3s with Duple Metsec DM5000 bodywork, as of which were Singapore's first low floor double deck buses. However, due to the large number of Trident orders from Hong Kong, these buses only entered revenue service in July 2001[5] and were deployed to Hougang Bus Depot throughout their lifespan. When delivered, all buses featured advanced specifications such as Transit Media electronic display signages, and a fully low floor configuration, which was a rarity for SBS buses at the time of introduction. In 2013, some buses have their display signages replaced with Cool-Air or Hanover EDS units. All units were fully retired by August 2018.

Coach USA of the United States introduced 30 Trident 3s for its Gray Line sightseeing services. These were equipped with open-top Duple Metsec bodywork assembled by Alexander. These were followed by a further 10 buses with the same specifications.[6] They entered service in 2001 and were allocated to cities such as New York City and San Diego.

In 2002, the Trident 3 chassis was modified and then introduced as a complete bus, which was known as TransBus Enviro500.

No more Trident 3 chassis was known to be built after 2002.

Retrieved from "https://en.everybodywiki.com/index.php?title=Dennis_Trident_3&oldid=1226178"
Categories:
Hidden categories:
This page was last edited on 9 January 2021, at 06:27.
This page has been accessed 133 times.
Content is available under License CC BY-SA 3.0 unless otherwise noted.
Privacy policy
About EverybodyWiki Bios & Wiki
Disclaimers