Domino is a general name for a range of kit car bodies originally produced by Fibretech GRP and distributed by Domino Cars (GB) Ltd. The assets of Fibretech were eventually transferred to Domino Composites which changed its name to Composite Designs and which finally went into liquidation at the end of 2007. Production is being continued by the DominoCars-Organisation which is a separate entity from any of the predecessors. The models are being re-engineered to incorporate modern safety features. They were intended originally for use with components from the classic Mini, but adapted in some cases for use as electric vehicles, and even in at least one case powered by steam. DominoCars-Organisation is currently developing a hybrid Diesel-electric powered unit to power the classic Mini-shaped vehicle as a town car.

The Domino range included until the 2007 liquidation the Pimlico, the Premier, the HT Saloon and Pick-up models, each designed to echo the design of the classic Mini, but with modifications necessary both because of their fiberglass construction, and due to licensing issues. The range to be continued (2008+) will include the Pimlico and the Saloon. Plans are being drawn for a hybrid-powered town car utilising the Domino shells.

Unlike most Mini based kit cars, such as the Marcos and Midas, the Domino is intended to resemble the design of a traditional steel-shelled Mini. There are, however, several obvious styling differences that distinguish them:

All Dominos (as indeed is the case with most fibreglass car body shells) are seamless and thus feature none of the distinctive guttering found on a steel shelled Mini. Some owners choose to add their own sections of gutters above doorways to avoid being dripped on.

The cars by default feature large wheel arches molded into the body, giving a similar style to the later 'Sports Pack' Mini range. Thirteen inch (330 mm) wheels can be fitted with no modifications (though Domino Cars themselves recommend 12"). All Domino models feature distinctive side skirts, not dissimilar to those found on popular Mini body kits, although they descend no lower than the underside of the body. The design on the skirt varies depending on the model of Domino.

The sills on all models are higher than those found on a steel shell, giving the fiberglass body extra strength, though having the adverse effect of making exit and entry into the vehicle slightly more awkward.

Finally, the rear lights (on models which allow the fitting of regular Mini clusters) are often positioned higher than usually found on a Mini.

As of the 2007 Liquidation. See DominoCars Organisation website for more up-to-date information.

The Pimlico, designed in 1986, was the original car designed by Domino Cars. It has an open top, with a fabric hood. 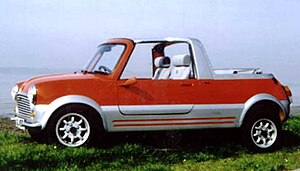 The Premier was developed from the Pimlico in 1988, featuring lowered doorsills which enabled double skinned, internally hinged doors to be fitted. It also allows a regular Mini bootlid to be used. A variant, the Premier Plus is identical other than being six inches (152 mm) longer.

The HT (Hard Top) resembles more the traditional Mini, with its full roof. Wheel arches are slightly wider, and the car uses original Mini steel door inner skins, shortened by around five centimetres and bonded to a fibreglass outer skin.

A development of the HT Saloon, the two-seat Pick-up differs in obvious ways, but is also slightly longer, giving the driver more leg room.

The Cabrio, superseded by the Premier, was an open-top design featuring doors of similar length to the HT and Pick-Up, as well a similar sill design.

This variant of the Pick-up features a back seat as found in a regular Domino. Availability is unknown.

The HT-ES (Evolution Sport) features the same design as the HT, but constructed from Carbon / Kevlar composite materials rather than purely fibreglass, and as such is lighter - its quoted shell weight is 50 kg (110 lb). Availability is unknown.

The Domino race shell has much removed, featuring only the bare minimum of a structure and a space frame chassis replacing the standard Mini subframes. Its quoted shell weight is 38 kg (84 lb). Availability is unknown.

After the company ceased trading, an announcement was made on the website that there were plans to bring the Domino range back into production, along with a diesel-electric hybrid variant. This was also announced on Wikipedia at the time. Sadly, nothing further was heard about the project. There were no contact details for the current project owners and during 2013 the company website ceased to exist.

A Facebook fan club page was set up in 2012[1] to promote the car and to promote discussions from owners and enthusiasts. This club is not connected with the former company, but links Domino car owners from around the world. The car still attracts a lot of interest, particularly in the Netherlands, Germany and the United Kingdom.

Moulds and tooling for the Domino cars is said to still exist, but the exact whereabouts are unknown.[2] At least one other low-volume car manufacturer has attempted to find the current owner of the project with a view to reviving the cars, but to no avail.

Retrieved from "https://en.everybodywiki.com/index.php?title=Domino_(car)&oldid=883601"
Categories:
Hidden categories:
This page was last edited on 22 July 2020, at 17:56.
This page has been accessed 409 times.
Content is available under License CC BY-SA 3.0 unless otherwise noted.
Privacy policy
About EverybodyWiki Bios & Wiki
Disclaimers
Mobile view