Download books of Doug Rowell or buy them on amazon

Douglas Edward Rowell, better known as Doug Rowell (born March 12, 1974)[1] is an American Advertising Executive, Animation Director and Producer.[2] He is best known for his work as director of eight episodes and producer of two on an American animated series High School USA! produced by Friends Night and Animation Domination High-Def Studios, starring Vincent Kartheiser, T.J. Miller, Mandy Moore, Zosia Mamet and Dino Stamatopoulos, which was released in 2013 creating controversy with an FCC ban of one of its episodes .[3] The program holds a TV-MA rating for explicit language (L) and sexual content (S), making it the first show on Fox to be given such a rating since the short-lived 1990s show Action. However, most reruns of this show are rated TV-14 for suggestive dialogue (D), sexual content (S), offensive language (L), and/or graphic violence (V).

Douglas Edward Rowell was born in Berkeley, California located in Alameda County in 1974.[1] He attended Acalanes High School in Lafayette, California and received his Bachelor of Fine Arts from Academy of Art University in San Francisco, California. During his studies, Doug worked on the student run CG short film Freeware,[4] the 2001 winner of the Sundance On-Line Film Festival Viewers Award.[5]

Doug Rowell began his career in television animation working on The Proud Family Shorties which was a short format Cartoon spin-off of The Proud Family created by Bruce W. Smith and produced by Jambalaya Studios using Adobe Flash[6] that follows the adventures of the recurring characters BeBe & CeCe Proud and Puff the dog. The series is the first Disney children's cartoon which did not premiere on network/over-the-air television, which had been done since 1984 when the Television Animation unit was started. It marked the first animated Disney Channel Original Series, and, incidentally, the only original animated series from Disney Channel not associated with, and to be produced exclusively by Disney's Television Animation arm.

In 2002, Doug moved to Los Angeles to pursue his career as a television animator on Kid Notorious,[7] an animated television series that aired for nine weeks (October 2003 to December 2003) on Comedy Central and is currently running on the UK version of Adult Swim. The show starred Hollywood film producer Robert Evans as himself. Episode plots were often bizarre and absurdist in nature, featuring Evans as a James Bond type character. Guns N' Roses guitarist Slash also appeared on the show as himself. The show was directed by Pete Michels.

In 2004, he worked as a television animator on Hi Hi Puffy AmiYumi,[8] an American-Japanese animated fantasy-comedy television series created by Sam Register for Cartoon Network that focused on an animated/fictionalized setting of the real-life J-pop group Puffy AmiYumi. Hi Hi Puffy AmiYumi debuted on Cartoon Network on November 19, 2004 at 7:30 PM ET/PT with two half-hour episodes. During that time, it scored the highest-ever Kids 2-11 rating and delivery and the second highest Kids 6-11 rating (4.4) and delivery (1,068,000) ever for an original series premiere. The show also charted double-digit increases with Girls 6-11 in ratings and delivery for Cartoon Network's Fridays programming block.[9] During the following week, the show became the network's top-rated hit for kids 6-11. It also increased Cartoon Network's audience among that age group by 49% over the previous year.[10] 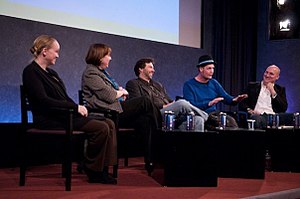 By 2005, Rowell had moved to New York to become a creative director at Agency.com[11] with a focus on television entertainment properties such as Food Network's[12] Ace of Cakes.[13] That same year, the company passed its 10-year anniversary of incorporation and was named “Best Creative Agency” by OMMA Magazine, and “B-to-B Interactive Agency of the Year” by BtoB Magazine.[14] Rowell was part of a 2006 ad campaign by Agency.com's New York office which involved an experimental "viral" pitch video for the Subway (restaurant) account uploaded onto YouTube.com. The purpose of the pitch video upload appears to have been an attempt to show Agency.com's online innovation to Subway by including a "viral" component in the pitch by documenting the pitch process itself and uploading it for all the world to see, discuss, and pass around. The term, "When we roll, we roll big" was used by an Agency.com employee in the video. Industry commentary was generally negative.[15][16][17][18]

After becoming a partner in independent advertising agency Mediatavern, in 2008, he participated in Advertising Week as a moderator to bring leading animation experts for a panel discussion on the current and future state of animation, storytelling and visual effects on Madison Avenue and the advertising industry. The break through panel included Jimmy Hayward, Pixar alumni and director of Horton Hears a Who! (film), Family Guy's supervising director Pete Michels and The Jim Henson Company's digital production head, Kerry Shea.[19]

At the end of 2012, Rowell left Mediatavern to establish a full time focus on developing original content both for traditional entertainment channels as well as business to business branded entertainment. This new direction saw him partner with Advertising Week; an event that takes place in five different major cities across the globe – New York, London, Tokyo, Mexico City and Sydney – for marketing, brand, advertising, and technology professionals to create a new Original Content vertical for the event and online platform. Rowell has been working as the SVP Development Original Content ever since—developing content for broadcast and online and speaking at international film events. In 2016 Rowell was elevated to Executive Director LATAM and in 2018 he oversaw the expansion of Advertising Week into Latin America with Advertising Week LATAM in Mexico City.[20][21][22][23]

Since the beginning of 2013, Rowell has returned to entertainment full-time with work on a variety of television shows. He started this new period as an executive producer and supervising director on Angry Little Asian Girl animated series with Mnet Media and Duck Studios for the Mwave platform[24] which was based on the Angry Little Asian Girl, Five Angry Episodes animated series by Lela Lee.[25]

Rowell followed with animation director and producer assignments on several shows for Animation Domination High-Def (also called Animation Domination HD, Fox ADHD, and ADHD) which was developed as a late-night programming block broadcast by Fox. Originally premiering on July 27, 2013 as a spin-off of the Fox network's Sunday-night Animation Domination block, the block originally focused on new, original adult animation series—similarly in style to Adult Swim. The ninety-minute block and its content were primarily produced by Friends Night, a studio headed by Adult Swim alumni Nick Weidenfeld, Hend Baghdady, and creative director Ben Jones—including its programs, along with interstitials and other content featured during its programming. He worked on shows including Lucas Bros. Moving Co., Golan the Insatiable, and High School USA! which was a parody cartoon of the Archie comic book characters and modern issues not generally explored in those comics. The show was about the millennial high-school experience, following a clique of sunny, well-meaning students consisting of Marsh Merriwether (voiced by Vincent Kartheiser), Amber Lamber (voiced by Zosia Mamet), Cassandra Barren (voiced by Mandy Moore), Brad Slovee (voiced by T.J. Miller), and Lamort Blackstein (voiced by Nathan Barnatt). This last show which was created by Dino Stamatopoulos, being notable for creating controversy with an FCC ban of one of its episodes .[3] Rowell continued as an animation producer for Starburns Industries on G.I. Jeff which was the eleventh episode of the fifth season of Community, and the 95th episode overall in the series. The episode was written by Dino Stamatopoulos, and directed by Rob Schrab. The episode was completed in the animation style of the popular 1980s children's television cartoon, G.I. Joe.[26] The episode received generally positive reviews, with critics praising the affectionate homage to the childhood cartoon series. Despite positive reviews, however, the episode saw season lows of 0.9/3 in the 18-49 rating/share demo and 2.50 million American viewers.[27]

From 2014 through 2016, Rowell worked with Starburns Industries on animation production under the production banner of LosFX starting with Animals., an American animated comedy television series created by Phil Matarese and Mike Luciano that HBO picked up as series with a two-season order in May 2015,[28] which premiered on February 5, 2016.[29] In tandem with Animals. , Rowell and his production banner LosFX produced two episodes of Party Legends for Viceland (stylized as VICELAND), a multinational television channel brand owned and programmed by Vice Media. Party Legends is a show about re-enactments of entertaining party stories,[30] In 2016, Rowell executive produced animation for a new television show called HarmonQuest under the production banner of LosFX and creative oversight of lead studio Starburns Industries. HarmonQuest is an American adult animation/live improvisation television show created by Dan Harmon. The show is part animated, part live action. Dan Harmon and comedians Erin McGathy, Jeff B. Davis, along with game master Spencer Crittenden, perform a fantasy roleplaying campaign in front of a live audience. Each episode of the show also features a special guest player. The content of their stories was then animated by Rowell's LosFX along with Starburns Industries, resulting in the episodes featuring a mix of live and animated footage. On October 19, 2016, Seeso renewed HarmonQuest for a second season.[31]

2016 also saw the completion and release of All the Way to the Ocean, an independently produced computer animated short film based on the children's book of the same name by Joel Harper.[32][33] The screenplay was written by Joel Harper,[34] Pete Michels,[34] and Doug Rowell.[34] The film was directed by Doug Rowell and produced by Joel Harper.[34] The film is narrated by American actress Marcia Cross and features the song With My Own Two Hands by Ben Harper.

Share
Retrieved from "https://en.everybodywiki.com/index.php?title=Doug_Rowell&oldid=883941"
Categories:
Hidden categories:
This page was last edited on 22 July 2020, at 20:27.
Content is available under License CC BY-SA 3.0 unless otherwise noted.
This page has been accessed 1,274 times.
Privacy policy
About EverybodyWiki Bios & Wiki
Disclaimers