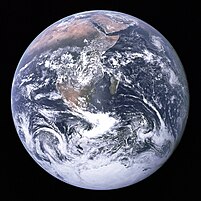 «The Blue Marble», the most famous photograph of the Earth.

Earth is the third planet from the Sun. It is the largest terrestrial planet and also the fifth largest planet. It also has the highest density out of all the Solar System planets due to its rocky and metallic composition.

Earth is special due to its life-sustaining conditions. It has water (in three (solid, liquid, gas) of the four (solid, liquid, gas, plasma) states of matter) for living things to drink, an atmosphere so we can breathe and not have serious cancer. Depending on one's definition, Earth has either one or even three moons: The Moon (aka Luna), 2016 HO3,[1] and Cruithne.[2] 2016 HO3 and Cruithne are «Quasi-satellites», which were found to orbit both the Sun and the Earth. However, scientists do not consider them true moons. Earth also temporarily captures asteroids in its path into orbit around it.

The structure of the Earth is divided into

The Earth has an atmosphere that extends to

kilometers above the Earth's surface. Air referrers to any part of the atmosphere.

of the atmosphere is made out of Nitrogen, while

is made out of breathable oxygen. The remaining

is made out of other gases like hydrogen, helium, and argon. The layers of the atmosphere are:

Even though the thermosphere goes up to an altitude of

kilometers, the defined boundary between the atmosphere and space, called the Kármán line, is placed at an altitude of

The Earth has a magnetic field to protect us from harmful solar rays. All magnets have a north pole and a south pole. The Earth's magnetic poles are slightly off-target, since the magnetic north pole is 2,000 km away from the geographical north pole and the south pole is located off the coast of Antarctica. Since opposite sides attract and like charges repel each other, the forces made by a pole would point toward the opposite pole! The inner core of the Earth is what generates the magnetic field, in other words, the inner core is a giant magnet.

Retrieved from "https://en.everybodywiki.com/index.php?title=Earth&oldid=1405341"
Categories:
Hidden category:
This page was last edited on 20 February 2021, at 23:35.
This page has been accessed 2,273 times.
Content is available under License CC BY-SA 3.0 unless otherwise noted.
Privacy policy
About EverybodyWiki Bios & Wiki
Disclaimers