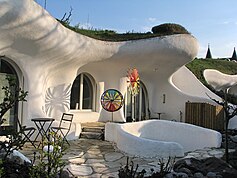 another view of the same building

An earth house (also known as an earth berm, an earth sheltered home, or an eco-house) is an architectural style characterized by the use of natural terrain to help form the walls of a house. An earth house is usually set partially into the ground and covered with thin growth. Modern earth houses are built with concrete walls and insulation.

Unlike traditional residential houses built on the ground, the aim of building an earth house is not to live under or in the ground, but with it. If ground and house are separated, a house is built “into the air”, resulting in the loss of heat and humidity, and the exterior shell of a building loses lifespan. The earth house concept uses the ground as an insulating blanket that efficiently protects it from rain, low temperatures, wind and natural abrasion. An earth house does not have to be built under the ground, it can be placed onto naturally grown terrain. The earth house is a flexible construction which can be built according to the wishes of its owners, fulfilling the requirements for individuality and energy conservation.[1] The structural engineering of an earth house creates for an organic design requiring spatial sense and creativity. Earth house architecture brings to mind habitable sculptures, incorporating artistic claim and sculptural quality.

The entrance to an earth house can be in the roof. Early earth houses had no windows, but modern earth houses can have windows inside the roof which can mean that more natural sunlight enters them than in an average house. 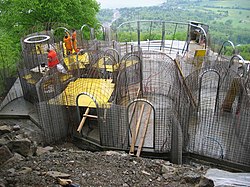 Structures, which are designed as integral arches, can be constructed as stiff individual objects or by means of a sprayed concrete procedure. Arches made of sprayed concrete provide for free and organic shapes, allowing rooms to become suffused with light. The sprayed concrete procedure was first used by natural scientist Carl Akeley in 1911. Akeley patented a device able to spray fine-grained concrete. While sprayed concrete is mainly applied in underground engineering and tunnel construction, Friedrich Kiesler was the first to use this technique for the construction of buildings.[2] Swiss architect Peter Vetsch improved the technique over several years. To date, he has built over 40 earth houses using sprayed concrete, and he can therefore be considered the leading authority in this area of expertise.[citation needed] The sprayed concrete is applied to a finely meshed metal stretch net which is welded onto the supporting armature. The curvatures are bent and formed according to the intended shape of the building. A 20 cm thick polyurethane solid-foam-insulation is sprayed onto the outside of the arches, protecting the house from low or high temperatures. A fleece filter mat is then laid on top of this and the building is covered with a thick layer of soil some 80 cm to 3 metres thick. The foundation of the buildings designed by Peter Vetsch are built conventionally. The interior walls of an earth house are furnished using loam rendering which provides superior humidity compensation. The loam rendering is finally coated with lime-white cement paint.[3]

Interior of an earth house

Earth houses by exponents like Peter Vetsch or Arthur Quarmby are based on the interpretation of an environmentally conscious, ecological and progressive architecture. They stand out due to their closeness to nature and allow an experience beyond the usual four walls and their right angles. The earth house concept uses its surroundings as an advantage – the surroundings are not adapted to the building, the house is shaped in order to preserve the natural environment. Modern earth-house architecture incorporates the latest interior finishing, such as contemporary kitchens, bathrooms and house-control systems. Furthermore, every house is newly designed in accordance with the wishes of its owners. Every earth house can therefore be considered a highly individual object. The focus of this planning process is the human being, who is given the opportunity to integrate a “third skin” into his own architectural language. Earth houses can be built as single residential houses or housing estates.

The advantages of an earth house are primarily ecological and security-related.

One of the main ecological benefits of earth-house architecture lies in its natural insulation. The unique architecture cools the house down in summer and keeps it warm in winter. A further advantage is the higher air humidity of 50 to 70% compared to overheated rooms of conventional houses in winter. Furthermore, as earth houses are impermeable, they can be considered ideal for controlled air conditioning.[citation needed]

The unique architecture of earth houses protects them against severe windstorms. They cannot be torn away or tipped over by strong winds. Structural engineering and, above all, the lack of corners and exposed parts (roof), eliminate vulnerable surfaces which would otherwise suffer from storm damage.[4] Furthermore, earth houses benefit from improved stability due to the more natural shapes of arches.

Compared to conventional buildings, earth houses fit perfectly into their surroundings. The soil-covered roofs help incorporate the environment, protect the natural scenery, and contribute to the oxygen-nitrogen balance of the soil, which would otherwise be covered by the foundation of a traditional house, inhibiting nitrogen fixation and aeration of the soil. Contrary to conventional roofs, earth-house roofs restore usable surface area to the environment. They can also be built as terraced structures if the slope is appropriate, thus using far less land area, because the structure can be built right up to the property boundary.[5] Owing to the condensed means of construction, more green space remains available. Furthermore, earth-house structures can easily be built into hilly terrain, as opposed to conventional houses, which would require flat land.

Compared to other building materials, such as wood, earth houses feature efficient fire protection owing both to the use of concrete and the insulation provided by the roof.

Roof covering is done using excavation material which allows for planting useful plants. As the roof collects and ties up most of the rain water, rivers are relieved of sudden and large amounts of water.

Due to the mass of the earth between the living area of an earth house and the surface grade, an earth home offers significant protection from impact/blast damage, or fallout associated with a nuclear bomb.

The specific architecture of earth houses usually leads to non-righted, round-shaped walls, which can cause problems concerning the interior decoration, especially regarding furniture and large paintings. However, these problems can be anticipated during the conceptual design of an earth house.

Despite large windows (usually facing south in the Northern Hemisphere), many earth-sheltered homes have dark areas in the areas opposite the windows. All natural light coming from one side of the home can give a "tunnel or cave effect". This may be alleviated by strategic use of skylights, solar tubes, or artificial light sources.

Because of the unorthodox design and construction of earth-sheltered homes, local building codes and ordinances may need to be researched and/or navigated.

Many financial institutions outright exclude financing on earth-berm homes or require this type of property to be common for the area.

You have to Sign in or create an account to comment this article !
Retrieved from "https://en.everybodywiki.com/index.php?title=Earth_house&oldid=885453"
Categories:
Hidden categories:
This page was last edited on 23 July 2020, at 05:37.
This page has been accessed 418 times.
Content is available under License CC BY-SA 3.0 unless otherwise noted.
Privacy policy
About EverybodyWiki Bios & Wiki
Disclaimers
Mobile view