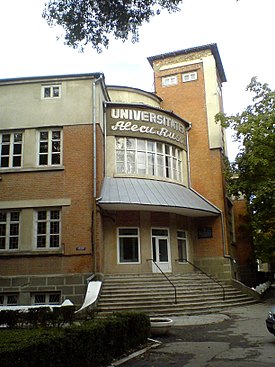 Education in Moldova is currently the responsibility of the Ministry of Education, Culture and Research.

In 1990, the average Moldovan spent six years in school, and only 30% of people older than 15 had completed secondary education. After the end of Soviet rule, reforms were established that required nationals to receive a basic education over 10 years, followed by enrollment in a technical school or an institution of higher learning.[1]

The lowest grade (mark) in Moldovan educational system is 1, the highest is 10. To pass a course, a subject, or an exam, the student must obtain a mark of 5 or above.

As of 2007-2008 academic year, Moldova had ten types of primary and secondary schools:

There are 6,200 faculty members in Moldova's universities, institutes and academies (on average 1 faculty member per 20.3 students). Out of these, only 2,700 (43%) hold PhD degrees, including 358 (5.8%) that also hold the highest academic degree: Habilitation. Moldovan faculty members usually teach around 20 hours per week (one of the highest workloads in the world).

52.5% of students major in economics, law, social sciences, or in some fields that the Moldovan Ministry of Education calls on its website "professional formation fields", 18.4% study engineering and architecture, 16.0% - education. There are a total of 90 specialities (majors) offered.

78.4% of students study in Romanian, roughly corresponding to its respective linguistic group,[4][5] while 19.5% study in Russian (including members of other linguistic groups like Gagauz or Bulgarian).[4] Foreign languages became increasingly less popular in recent years: 1.8% studied in English or French during the 2010-2011 schoolyear, compared to 3.2% in 2006.[4]

The National Council on Accreditation and Attestation is an organization that approves the examination programs for doctoral students, confers scientific degrees, and scientific and pedagogical ranks. The Council publishes online all PhD theses that are elaborated and defended in Moldova.[6]

At present, the graduates get two types of diplomas: one type for fulfilling the curriculum and the Licence examination, and a second type, if in addition they write a Licence Diploma paper.

The Ministry of Education defines its strategic objective for higher education to be "the integration into the European common space for higher education, and active participation in its construction". In 2005 Moldova signed the commitment to implement the Bologna process agreements. In view of this, several changes have been operated since:

The Ministry of Education's declared objectives in taking these actions are:

The quality of the higher education has been declared a priority. In this context, a prime priority is declared to the implementation of the National Framework of Qualifications for Professional Formation, which will determine the "educational finalities and competences", the "compulsory minimum of realization in higher education", and will somehow facilitate the rise in "the quality of the preparation of graduates for the national economy", and will also somehow contribute to "ensuring the continuous rise of the quality of education".

Universities and colleges are told to start creating own "systems of internal management of quality", with the aim of "organizing the internal process of ensuring the quality, in accordance with national standards, and the demands of external evaluation systems".