The Superior School of Visual Arts Marrakech (ESAV Marrakech) is a higher education institution of film and visual arts located in Marrakech, Morocco.[1][2] 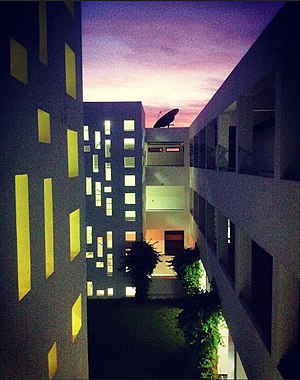 Founded by Vincent Melilli,[3] and Susanna Biderman in collaboration with a Maroco-Swiss group following an idea that originated within Dar Blarj (cultural house) in the medina of Marrakech,[4] the ESAV offers a university structure for the professions of cinema, television, graphic design, and interactive design.[5]

ESAV Based in Marrakech's Ecole Supérieure des Arts Visuels, It was created by the artists and speakers who developed the project in Appartement 22 in Rabat, [6] and other cultural or university spaces. [7]

Other articles of the topics Film AND Morocco : Hajar Graigaa, Ahmed Ziad

Retrieved from "https://en.everybodywiki.com/index.php?title=Esav_Marrakech&oldid=2043166"
Categories:
Hidden categories:
This page was last edited on 7 September 2021, at 17:41.
This page has been accessed 22 times.
Content is available under License CC BY-SA 3.0 unless otherwise noted.
Privacy policy
About EverybodyWiki Bios & Wiki
Disclaimers