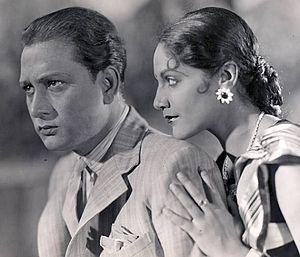 Pramila in the 1936 film Hamari Betiya.

Esther Victoria Abraham (30 December 1916 – 6 August 2006), better known by her stage name Pramila, was an Indian model, actress and first woman film producer in the Hindi film industry. She is also well known for winning the first Miss India pageant in 1947.

Pramila was born in 1916 in Kolkata, to a Baghdadi Jewish family.[1][2] She was the daughter of Reuben Abraham, a businessman from Kolkata, and Matilda Isaac, from Karachi. She had three siblings from her father's first marriage to Liya, and six siblings from her own parents' marriage.

Her youngest son, Haidar Ali, has also pursued a career in films and television. Her daughter Naqi Jahan, was crowned Eve's Weekly Miss India in 1967, representing India at the Queen of the Pacific Quest beauty pageant in Australia.[4] They are the only mother and daughter to have both won the Miss India title.

Pramila was the winner of the first Miss India pageant, in 1947 and at the age of 31.[6][7][8] Her first job in the entertainment industry was as a dancer for a Parsi theatre company, dancing during the 15 minutes pause while the reel projector was changed.[9] Pramila acted as a fearless stunt star in 30 films, including Ulti Ganga, Bijli, Basant (film) and Jungle King. She also became the first major woman film producer in India, with 16 films under her banner Silver Productions. Morarji Desai, the then Chief Minister of Bombay, had her arrested because she was suspected of spying for Pakistan, due to her constant travels to that country. However, it was later proven she travelled to promote her films.[10]

Pramila was a multi talented person. Not only was she a fine actor and film producer, she was also a graduate of the University of Cambridge, became a skilled teacher,[11] often designed her own film costumes and jewelry too.

Share
Retrieved from "https://en.everybodywiki.com/index.php?title=Esther_Victoria_Abraham&oldid=819896"
Categories:
Hidden categories:
This page was last edited on 19 June 2020, at 15:56.
Content is available under License CC BY-SA 3.0 unless otherwise noted.
This page has been accessed 1,116 times.
Privacy policy
About EverybodyWiki Bios & Wiki
Disclaimers