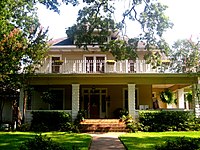 The Bliss-Hoyer House, built by Abel and Nettie Bliss, was later the home of Ewald Max Hoyer.

Ewald Max Hoyer (date of birth and death missing) was a dairyman[1] and real estate businessman who served from 1907 to 1910 as the founding mayor of Bossier City in northwestern Louisiana. He was appointed to the position when Bossier City was declared a village by Governor Newton Blanchard.[2] Though he served in Bossier City, Hoyer continued to live in Shreveport in Caddo Parish, the larger companion city separated from Bossier City by the Red River.

Hoyer was one of four sons and three daughters born in Marine in Madison County in southern Illinois, to Ewald A. Hoyer (1831-1915) and the former Justina Hartman (1837-1916), both natives of Germany. The parents died three days apart; each had expressed a wish not to outlive the other. They are interred in a single grave at New Douglas Cemetery in New Douglas in Madison County, Illinois.[3]

For many years, Hoyer resided at a historic home at 902 Robinson Place in the Highland neighborhood of Shreveport. The Bliss-Hoyer House, was constructed by the planter Abel Bliss but sold to Hoyer. In his later years, Hoyer was a partner with a brother, Hugo Hoyer (1874-1961),[1] in the establishment of Centuries Memorial Park in south Shreveport.[4] A grocer, Hugo Hoyer came to Shreveport in 1896 from St. Louis, Missouri. He was a founder of the Shreveport Chamber of Commerce and the last surviving director of that organization. He served after 1900 on the Shreveport City Council and helped to plan the old city hall, long since demolished.[1]

Hoyer was succeeded as mayor in 1910 by M. B. Woodward, who was elected and served thereafter for nine years.[2]

Share
Retrieved from "https://en.everybodywiki.com/index.php?title=Ewald_Max_Hoyer&oldid=889218"
Categories:
Hidden categories:
This page was last edited on 24 July 2020, at 06:10.
Content is available under License CC BY-SA 3.0 unless otherwise noted.
This page has been accessed 1,715 times.
Privacy policy
About EverybodyWiki Bios & Wiki
Disclaimers