William Matthew Lowe, known as W. Matt Lowe (January 1, 1872 – March 4, 1955), was a merchant and public official in the city of Minden, the seat of government of Webster Parish in northwestern Louisiana.

During World War I and its aftermath, Lowe served two terms from 1916 to 1920 as mayor of Minden. A Democrat, Lowe was from 1940 to 1954 a member of the Webster Parish Police Jury, the parish governing commission equivalent to the county commission in other states.[1]

Lowe was born in Louisiana, parish not available, but his father was a native of North Carolina; his mother, from Georgia.[2] In June 1916, Lowe succeeded the three-term Abner Drake Turner (March 16, 1877 – December 25, 1953). Though he had held the office for only six years from 1910 to 1916, Turner was at the time the longest serving mayor since 1868 and possibly since the founding of Minden in 1837.[3] Turner graduated in 1889 from the Louisiana Industrial Institute, the forerunner of Louisiana Tech University in Ruston. A major civic figure from a prominent family, Turner was a president of the former Bank of Webster and the Minden Building and Loan Association[4] and served on the Webster Parish School Board and the Webster Parish Democratic Executive Committee, the ruling political force in the city. Turner died of a heart attack on Christmas Day 1953.[5]

During Mayor Lowe's first term of two years, the city in 1917 acquired its municipal generating station after a fire swept through the former Minden Lumber Company, the previous owner of the facility.[6] Minden is one of twenty municipalities in Louisiana in which residences and businesses still purchase their electricity from the city, with profits diverted to finance the costs of government.[7]

Lowe's son-in-law, Leland Garland Mims (1901-1979), also a Minden businessman, served on the police jury from 1953 to 1976, including a long stint as jury president from 1956–1973 and as president of the Police Jury Association of Louisiana from 1965 to 1967. The two were on the police jury together for the last year of Lowe's life.[8]Lowe was like Turner a member of the Knights of Pythias lodge and the First Methodist Church of Minden.[9][5] 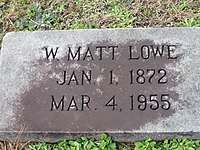 Lowe died of a lengthy illness in a Shreveport hospital. Mrs. Lowe, the former Clara Dorcas Hodges (1880–1954), preceded her husband in death by fewer than three months. She was the daughter of Edmund William Hodges (1845-1920) and the former Augusta Adeline Applewhite (1849-1946), a couple originally from Georgia who settled in Cotton Valley in central Webster Parish.[10] Matt and Clara Lowe had a son, the late Fred M. Lowe of Shreveport, and two daughters, Thelma Lowe Spencer (1901-2000), wife of the road contractor George Benjamin Spencer, Sr. (1890-1965), who resided in several locations in Arkansas, including Star City,[11] and Rubye Lowe Mims (1904–1975) of Minden, the wife of Leland Mims. The Lowes, Spencers, and Mimses are interred at the historic Minden Cemetery.[9]So is his mayoral predecessor, Abner Turner and his wife, Lillian M. Turner (1887-1968).[5]

In 1927, the Lowes lost to a sudden grave illness a three-year-old granddaughter, Gwendolyn Spencer, then living with her parents in the Evergreen Community in Webster Parish.[12] A Lowe grandson, George B. Spencer, Jr. (1925-2007), the brother of Gwendolyn Spencer and a native of Minden, was a United States Army officer in World War II, a power company executive, and a twice elected member of the Quorum Court in Jefferson County, Arkansas, equivalent to the police jury in Louisiana. The junior Spencer retired to Paducah, Kentucky. He is interred at Graceland Cemetery in Pine Bluff, Arkansas.[13]

Lowe was succeeded as mayor by J. Berry Sandefur (October 21, 1868 – July 14, 1954), a Minden merchant who served a two-year term from 1920 to 1922.[14] Sandefur was a director of the Minden Building and Loan Association when previous Mayor Abner Turner was the president of the association.[4] Sandefur is also interred at Minden Cemetery.

Share
Retrieved from "https://en.everybodywiki.com/index.php?title=W._Matt_Lowe&oldid=682174"
Categories:
Hidden categories:
This page was last edited on 27 January 2018, at 21:05.
Content is available under License CC BY-SA 3.0 unless otherwise noted.
This page has been accessed 782 times.
Privacy policy
About EverybodyWiki Bios & Wiki
Disclaimers