100% of FORM’s revenues come from clients in Russia. The company creates and produces automatic measuring instruments for functional testing of:

1992-1996 – FORM was founded in Moscow in 1992 and was specializing in design gate-array-based LSI circuits and SAW filters and their manufacturing using «the shortest path»:

The enterprise also released several options of the computer of the Narсom (the "national computer") - a Russian analogue of ZX Spectrum, as well as a controller Beta Disk Interface.[3]

1996 - In order to conduct the periodic production tests of microchips manufactured on its own foundry, a project was launched to create the first Russian automated test equipment. As a result, the first task-specific ATE for complex testing of microcircuits on a wafer and in a package was released. After implementation the tester to its own production, this test system was in demand by other enterprises, such as Angstrem Group, FSUE Research Institute of Measuring Systems Yu.E. Sedakova, State Enterprise Scientific Production Association Of Automation, where the test systems are still in operation. 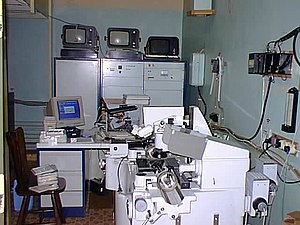 
2006 - The company introduced the first high-frequency test system - FORMULA®HF2, the frequency of its operation increased from 20 MHz to 200 MHz.


2011 - The company has organized, equipped its testing laboratory, having allocated it into a separate enterprise ILFORM, which became Skolkovo resident. The laboratory was entrusted with testing, first of all, of the company's own products-microcircuits, but its capabilities were in demand by the enterprises of the industry, such as Progress Rocket Space Centre (Samara), State Enterprise Scientific Production Association Of Automation (Ekaterinburg), Polyus Scientific Research Institute, MCST and others.


2015 - The software package for Test Systems FORMULA®HF2, FORMULA®HF3, FORMULA®HF3-512 is registered in The Russian Federal Service for Intellectual Property.


2017 – The 300th test system FORMULA was delivered to Mikron Group, the number two foundry in Russia.

FORMULA HF3 test system at the exhibition in Skolkovo

IS Kamchatka - is the Information system of traceability for control automation of electronic components life cycle.


TestBox - is a specialized measuring equipment for connecting specific types of ECB.


All Test Systems are the result of the company's own development with the use of original technical solutions in the design of measuring equipment, as well as a specialized elementary database and software.

This article "FORM ATE" is from Wikipedia. The list of its authors can be seen in its historical and/or the page Edithistory:FORM ATE. Articles copied from Draft Namespace on Wikipedia could be seen on the Draft Namespace of Wikipedia and not main one.

Share
Retrieved from "https://en.everybodywiki.com/index.php?title=FORM_ATE&oldid=889601"
Categories:
Hidden category:
This page was last edited on 24 July 2020, at 08:58.
Content is available under License CC BY-SA 3.0 unless otherwise noted.
This page has been accessed 439 times.
Privacy policy
About EverybodyWiki Bios & Wiki
Disclaimers