Griffin Technology is a privately held U.S. company founded in Nashville, Tennessee in 1992 by Paul Griffin. The company designs and manufactures computer peripherals, consumer electronics, and accessories for smartphones and mobile devices. The company's first products were primarily video adapters, in particular those to enable the connection of DB-15 based Macintosh computers to the more popular VGA based monitors of the time. June 1998 marked Griffin's entry into USB based computer peripherals with the introduction of the iMate, a device that allowed the use of Apple Desktop Bus (ADB) based devices with the newer, and increasingly more common, Universal Serial Bus (USB). Griffin introduced additional USB devices, such as iMic and PowerMate, over the next two years, and continued to enjoy moderate growth during this period.

Griffin was one of the first 3rd-party vendors to produce peripherals for Apple's iPod. One year after iPod came out, at MacWorld San Francisco 2003, Griffin introduced iTrip. iTrip is an FM transmitter that allows iPod owners to transmit audio from an iPod to a nearby FM receiver.

The company experienced rapid growth fueled by the success of its iPod accessories, especially the iTrip. As evidence, the number of people employed by Griffin Technology increased four-fold between 2003 and 2007. This growth allowed the company to take on more ambitious projects such as the Evolve wireless speaker system, and to diversify the product line to include accessories for iPod competitors such as Microsoft's Zune, and SanDisk's Sansa.

At present, the company's accessories line-up includes those for Apple's iOS devices, as well as popular smartphones, tablets, and handheld devices from Google, Amazon, Samsung, HTC, and Motorola. Products range from protective cases for these devices, to consumer electronics and accessories for audio performance and playback, and products for retail and healthcare markets. 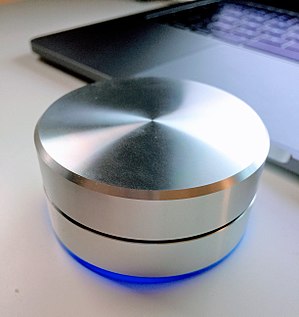 The PowerMate is a popular product from Griffin

In 2014, Griffin became one of the first Nashville companies to become a naming partner at a career academy of a local high school. The Griffin Academy of Design and Technology is located at Hunters Lane High School of Metropolitan Nashville Public Schools.[1]

Retrieved from "https://en.everybodywiki.com/index.php?title=Griffin_Technology&oldid=41012"
Categories:
Hidden categories:
This page was last edited on 29 May 2018, at 01:14.
This page has been accessed 882 times.
Content is available under License CC BY-SA 3.0 unless otherwise noted.
Privacy policy
About EverybodyWiki Bios & Wiki
Disclaimers
Mobile view