The File Transfer Protocol (FTP) is a standard network protocol used for the transfer of computer files between a client and server on a computer network.

FTP is built on a client-server model architecture using separate control and data connections between the client and the server.[1] FTP users may authenticate themselves with a clear-text sign-in protocol, normally in the form of a username and password, but can connect anonymously if the server is configured to allow it. For secure transmission that protects the username and password, and encrypts the content, FTP is often secured with SSL/TLS (FTPS) or replaced with SSH File Transfer Protocol (SFTP).

The first FTP client applications were command-line programs developed before operating systems had graphical user interfaces, and are still shipped with most Windows, Unix, and Linux operating systems.[2][3] Many FTP clients and automation utilities have since been developed for desktops, servers, mobile devices, and hardware, and FTP has been incorporated into productivity applications, such as HTML editors. 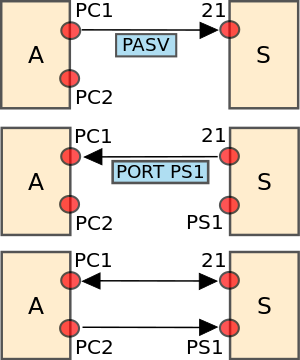 FTP may run in active or passive mode, which determines how the data connection is established.[5] In both cases, the client creates a TCP control connection from a random, usually an unprivileged, port N to the FTP server command port 21.

Both modes were updated in September 1998 to support IPv6. Further changes were introduced to the passive mode at that time, updating it to extended passive mode.[7]

The server responds over the control connection with three-digit status codes in ASCII with an optional text message. For example, "200" (or "200 OK") means that the last command was successful. The numbers represent the code for the response and the optional text represents a human-readable explanation or request (e.g. <Need account for storing file>).[1] An ongoing transfer of file data over the data connection can be aborted using an interrupt message sent over the control connection.

While transferring data over the network, four data representations can be used:[2][3][4]

For text files, different format control and record structure options are provided. These features were designed to facilitate files containing Telnet or ASA.

Data transfer can be done in any of three modes:[1][2]

Some FTP software also implements a DEFLATE-based compressed mode, sometimes called "Mode Z" after the command that enables it. This mode was described in an Internet Draft, but not standardized.[8]

FTP login uses normal username and password scheme for granting access.[2] The username is sent to the server using the USER command, and the password is sent using the PASS command.[2] This sequence is unencrypted "on the wire", so may be vulnerable to a network sniffing attack.[9] If the information provided by the client is accepted by the server, the server will send a greeting to the client and the session will commence.[2] If the server supports it, users may log in without providing login credentials, but the same server may authorize only limited access for such sessions.[2]

A host that provides an FTP service may provide anonymous FTP access.[2] Users typically log into the service with an 'anonymous' (lower-case and case-sensitive in some FTP servers) account when prompted for user name. Although users are commonly asked to send their email address instead of a password,[3] no verification is actually performed on the supplied data.[10] Many FTP hosts whose purpose is to provide software updates will allow anonymous logins.[3]

FTP normally transfers data by having the server connect back to the client, after the PORT command is sent by the client. This is problematic for both NATs and firewalls, which do not allow connections from the Internet towards internal hosts.[11] For NATs, an additional complication is that the representation of the IP addresses and port number in the PORT command refer to the internal host's IP address and port, rather than the public IP address and port of the NAT.

There are two approaches to solve this problem. One is that the FTP client and FTP server use the PASV command, which causes the data connection to be established from the FTP client to the server.[11] This is widely used by modern FTP clients. Another approach is for the NAT to alter the values of the PORT command, using an application-level gateway for this purpose.[11]

HTTP essentially fixes the bugs in FTP that made it inconvenient to use for many small ephemeral transfers as are typical in web pages.

FTP has a stateful control connection which maintains a current working directory and other flags, and each transfer requires a secondary connection through which the data are transferred. In "passive" mode this secondary connection is from client to server, whereas in the default "active" mode this connection is from server to client. This apparent role reversal when in active mode, and random port numbers for all transfers, is why firewalls and NAT gateways have such a hard time with FTP. HTTP is stateless and multiplexes control and data over a single connection from client to server on well-known port numbers, which trivially passes through NAT gateways and is simple for firewalls to manage.

Setting up an FTP control connection is quite slow due to the round-trip delays of sending all of the required commands and awaiting responses, so it is customary to bring up a control connection and hold it open for multiple file transfers rather than drop and re-establish the session afresh each time. In contrast, HTTP originally dropped the connection after each transfer because doing so was so cheap. While HTTP has subsequently gained the ability to reuse the TCP connection for multiple transfers, the conceptual model is still of independent requests rather than a session.

Most common web browsers can retrieve files hosted on FTP servers, although they may not support protocol extensions such as FTPS.[3][12] When an FTP—rather than an HTTP—URL is supplied, the accessible contents on the remote server are presented in a manner that is similar to that used for other web content. A full-featured FTP client can be run within Firefox in the form of an extension called FireFTP.

FTP URL syntax is described in RFC 1738, taking the form: ftp://[user[:password]@]host[:port]/url-path (the bracketed parts are optional).

More details on specifying a username and password may be found in the browsers' documentation (e.g., Firefox[13] and Internet Explorer[14]). By default, most web browsers use passive (PASV) mode, which more easily traverses end-user firewalls.

Some variation has existed in how different browsers treat path resolution in cases where there is a non-root home directory for a user.[15]

FTP was not designed to be a secure protocol, and has many security weaknesses.[16] In May 1999, the authors of RFC 2577 listed a vulnerability to the following problems:

FTP does not encrypt its traffic; all transmissions are in clear text, and usernames, passwords, commands and data can be read by anyone able to perform packet capture (sniffing) on the network.[2][16] This problem is common to many of the Internet Protocol specifications (such as SMTP, Telnet, POP and IMAP) that were designed prior to the creation of encryption mechanisms such as TLS or SSL.[4]

Common solutions to this problem include:

FTP over SSH is the practice of tunneling a normal FTP session over a Secure Shell connection.[16] Because FTP uses multiple TCP connections (unusual for a TCP/IP protocol that is still in use), it is particularly difficult to tunnel over SSH. With many SSH clients, attempting to set up a tunnel for the control channel (the initial client-to-server connection on port 21) will protect only that channel; when data is transferred, the FTP software at either end sets up new TCP connections (data channels) and thus have no confidentiality or integrity protection.

Otherwise, it is necessary for the SSH client software to have specific knowledge of the FTP protocol, to monitor and rewrite FTP control channel messages and autonomously open new packet forwardings for FTP data channels. Software packages that support this mode include:

Explicit FTPS is an extension to the FTP standard that allows clients to request FTP sessions to be encrypted. This is done by sending the "AUTH TLS" command. The server has the option of allowing or denying connections that do not request TLS. This protocol extension is defined in RFC 4217. Implicit FTPS is an outdated standard for FTP that required the use of a SSL or TLS connection. It was specified to use different ports than plain FTP.

The SSH file transfer protocol (chronologically the second of the two protocols abbreviated SFTP) transfers files and has a similar command set for users, but uses the Secure Shell protocol (SSH) to transfer files. Unlike FTP, it encrypts both commands and data, preventing passwords and sensitive information from being transmitted openly over the network. It cannot interoperate with FTP software.[18]

Trivial File Transfer Protocol (TFTP) is a simple, lock-step FTP that allows a client to get a file from or put a file onto a remote host. One of its primary uses is in the early stages of booting from a local area network, because TFTP is very simple to implement. TFTP lacks security and most of the advanced features offered by more robust file transfer protocols such as File Transfer Protocol. TFTP was first standardized in 1981 and the current specification for the protocol can be found in RFC 1350.

Simple File Transfer Protocol (the first protocol abbreviated SFTP), as defined by RFC 913, was proposed as an (unsecured) file transfer protocol with a level of complexity intermediate between TFTP and FTP. It was never widely accepted on the Internet, and is now assigned Historic status by the IETF. It runs through port 115, and often receives the initialism of SFTP. It has a command set of 11 commands and support three types of data transmission: ASCII, binary and continuous. For systems with a word size that is a multiple of 8 bits, the implementation of binary and continuous is the same. The protocol also supports login with user ID and password, hierarchical folders and file management (including rename, delete, upload, download, download with overwrite, and download with append).

Below is a summary of FTP reply codes that may be returned by an FTP server. These codes have been standardized in RFC 959 by the IETF. The reply code is a three-digit value. The first digit is used to indicate one of three possible outcomes — success, failure, or to indicate an error or incomplete reply:

The second digit defines the kind of error:

The third digit of the reply code is used to provide additional detail for each of the categories defined by the second digit.

Retrieved from "https://en.everybodywiki.com/index.php?title=File_Transfer_Protocol&oldid=305376"
Hidden category:
This page was last edited on 31 January 2019, at 16:13.
Content is available under License CC BY-SA 3.0 unless otherwise noted.
This page has been accessed 736 times.
Privacy policy
About EverybodyWiki Bios & Wiki
Disclaimers