The Four Cs of 21st century learning, also known as the Four Cs or 4 Cs, are four skills that have been identified by the United States-based Partnership for 21st Century Skills (P21) as the most important skills required for 21st century education: critical thinking, communication, collaboration, and creativity.[1][2][3][4]

These 21st century skills have been identified and supported by national educational and political leaders in the United States, including President Obama.[5] In January 2016 members of the US House of Representatives created a bipartisan Congressional 21st Century Skills Caucus.[6] The Four Cs have been adopted and implemented into the curricula of schools, school districts, camps and professional development programs.[7] 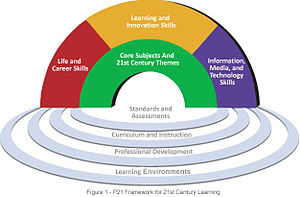 In 2002 the Partnership for 21st Century Skills (now the Partnership for 21st Century Learning, or P21) was founded as a non-profit organization by a coalition that included members of the national business community, education leaders, and policymakers: the National Education Association (NEA), United States Department of Education, AOL Time Warner Foundation, Apple Computer, Inc., Cable in the Classroom, Cisco Systems, Inc., Dell Computer Corporation, Microsoft Corporation, SAP, Ken Kay (President and Co-Founder), and Dins Golder-Dardis.[1] The American Management Association's "AMA 2010 Critical Skills Survey" found "that an overwhelming number of respondents believe that these 21st century skills are important to their organizations today and will become even more important in the future."[8]

P21's goal is to foster a national conversation on "the importance of 21st century skills for all students" and "position 21st century readiness at the center of US K-12 education".[1] The organization has released reports exploring how to integrate the Four Cs approach into learning environments.

Retrieved from "https://en.everybodywiki.com/index.php?title=Four_Cs_of_21st_century_learning&oldid=891579"
Categories:
This page was last edited on 24 July 2020, at 19:50.
This page has been accessed 264 times.
Content is available under License CC BY-SA 3.0 unless otherwise noted.
Privacy policy
About EverybodyWiki Bios & Wiki
Disclaimers
Mobile view