Francisco Mercado Jr. (February 17, 1920 – September 23, 2005) was a member of the United States Army Air Forces (USAAF) and recipient of the Distinguished Flying Cross who earned his membership to the exclusive "Caterpillar Club" having saved his life by parachuting over England while returning from a mission with a crippled B-24 during World War II.

Mercado was born in East Los Angeles, California and baptized as David Mercado. He graduated from Garfield High School in 1939. Having an aptitude and interest in electrical work, he graduated from Frank Wiggins Trade School (later L.A. Trade Tech) with high standing in 1940. However, all in his class were chosen as apprentice electricians by the electricians union except the two minority men, Mercado and a Japanese-American.

With the outbreak of war, he volunteered as an Air Corps Aviation Cadet in 1942. When he signed up, much to his surprise, the name on his birth certificate was Francisco Mercado. His Father who spoke little English had given his own name for the certificate instead of his son's by mistake. To the army he would be known as Francisco Mercado Jr.

He completed primary flight training in a Ryan PT-22 with 60 hours (28 solo) on October 27, 1942 and basic flight training in a Vultee BT-13 with 58 hours (21 solo) and was sent to dual engine advanced pilot training at Williams Field, Arizona in January, 1943.[1] After graduation, his class was to go into either the B-26 or night fighters. Mercado flew only four training flights with the AT-17 in early January when he came down with bad flu-like symptoms (probably Valley Fever) and was sent to the base infirmary for almost a month. He found himself quite far behind and after ten more hours of instruction flights, he was given a check ride and was washed out in early March 1943. Fate may have been kinder that he thought at the time. The wash out rate for this class was very high as they were to fly difficult aircraft. His best friend in the class went on to fly night fighters and was killed on his first solo night flight.[2]

Mercado was offered the option of Bombardier or Navigator training. He graduated from the Bombardier School at Kirtland Field (now Kirtland Air Force Base), Albuquerque, New Mexico in class WFTC 43-13 on September 11, 1943 and proudly received his Bombardier Wings and a commission as a Second Lieutenant. While in Albuquerque, he met a girl named Mildred Garcia who was at the University of New Mexico in a special program to train schoolteachers.[2]

He was assigned to the 491st Bomb Group (Heavy) which was equipped with the Consolidated B-24. The group completed its combat training at Pueblo, Colorado and deployed overseas to England using the southern route which included Florida, Trinidad, Brazil, and North Africa.

The 491st arrived at Metfield, England in May 1944. After a few training missions, Mercado flew his first combat mission on June 4, 1944 aboard the Lambsy Divey against military installations near St. Gabriel, France. On D-Day, he flew his 3rd mission where his was one of only nine planes of the Group to sight the target and bomb the SS Headquarters at Coutances west of Saint Lô. His 13th mission was his first to Germany on June 28, 1944 to the marshaling yard at Saarbruken.[3]:30 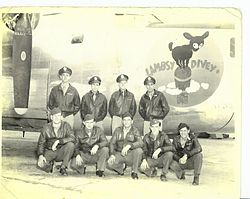 Crew of B-24 "Lambsy Divey"; Mercado at top right

On July 21, he lost his pilot on his 18th mission when his plane was severely damaged by flak and lost an engine on the way to the Kempton rail marshaling yards in Germany. Lt. Sig Liebfeld the pilot decided to continue on to the target even though they could not keep up with the Group. They bombed the target and almost made it back to an emergency field, but were forced to bail out over England. The brave pilot turned the plane out to sea to avoid danger to the civilian population but by the time he bailed out, his parachute drifted over the water and he was drowned. Lt. Liebfeld was posthumously awarded the Silver Star for heroic action on that mission.[3]:49

In mid August 1944, the 491st moved to the airfield at North Pickenham where it took over the base from the 'Hard Luck' 492nd BG which had lost almost 60 B-24s in only three months of combat and had to be disbanded. From this time on, Mercado flew as part of a lead crew (Shoemate crew) in the 853rd Bomb Squadron.[4]

November 26, 1944 was a black day for the 491st BG. They lost 16 aircraft out of 28 flown including all nine B-24s of the 853rd Squadron from an attack by at least 100 FW-190 fighters on the mission to the Misburg oil refinery. Lt. Mercado and his crew were not scheduled to fly the squadron lead on that mission and were spared. The 491st BG received the Distinguished Unit Citation for that mission and all members proudly wore the blue bar in memory of the brave men of that very costly mission.[5]

Bad weather in mid December grounded many of the 8th Air Force Groups. This allowed the Germans to launch a major offensive in the Ardennes (Battle of the Bulge). At the first opportunity the American Air Force launched the biggest bombing raid in history on December 24, 1944 to support the besieged ground forces . Over 2,000 bombers from the 8th Air Force and 1,000 bombers from the 15th based in Italy attacked Germany. The target of the 491st for that day was the bridges at Wittlich, Germany in which Mercado flew as a squadron lead bombardier on his 31st mission. Both the highway and railroad bridges were damaged temporarily stopping the movement of supplies. But perhaps the highlight of his military career came on December 30, 1944 on his 33rd mission when he flew as Group Lead Bombardier on the successful mission to the Railroad bridge at Altenahr, Germany.[3]:140

Mercado flew his last combat mission on January 16, 1945 to the Dresden marshaling yard. This turned out to be the longest mission (12 hours) on record for the 491st partly due to bad navigation and bad weather. Most of the planes were short on fuel and had to land in France. Lt. Mercado was never very specific about if his plane was one of those which landed at Orly field, and if the crew were 'forced' to spend a night on the town in Paris.[3]:155–157

Overall, Mercado flew 35 combat missions as a Bombardier over enemy occupied Continental Europe as a member of the 853rd Bomb Squadron, 491st Bomb Group, 8th Air Force. This included six missions as an Element Lead Bombardier, ten missions as a Squadron Lead Bombardier, and one as the Group Lead Bombardier. He was awarded the Distinguished Flying Cross and the Air Medal with four Oak Leaf Cluster. He earned a membership into the exclusive "Caterpillar Club" having saved his life by parachuting on July 21, 1944 over England while returning from a mission with a crippled B-24.[2]

After the war, Mercado returned to his profession as an electrician. He married Mildred Garcia, the girl he had met in Albuquerque and had three children and was very proud of his six grandchildren. Mercado, who retired in 1983, was one of the first Latino journeymen electricians in the International Brotherhood of Electrical Workers (IBEW). In November 2003, Mercado was interviewed by the Virginia Air and Space Center[6] in Hampton, Virginia. His interview, and the interviews of other B-24 crewmen, are part of the VASC's B-24 exhibit. On September 23, 2005, Francisco Mercado Jr. died in the city of his birth, Los Angeles, California.

Share
Retrieved from "https://en.everybodywiki.com/index.php?title=Francisco_Mercado_Jr.&oldid=1222035"
Categories:
Hidden categories:
This page was last edited on 8 January 2021, at 12:57.
Content is available under License CC BY-SA 3.0 unless otherwise noted.
This page has been accessed 415 times.
Privacy policy
About EverybodyWiki Bios & Wiki
Disclaimers