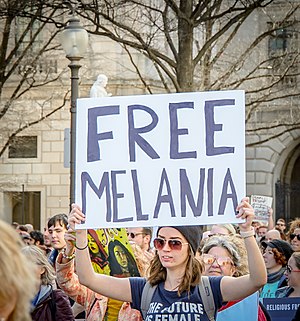 "Free Melania", or "Save Melania",[1] is a phrase referencing Melania Trump in relation to her husband Donald Trump, implying she is afraid of or unhappy with him.[2][3] It became a meme and hashtag, and trended on social media,[4][5] when she "was caught several times on camera looking miserable" during Trump's inauguration.[6][7]

The phrase has been used by anti-Trump demonstrators at marches,[5][8] and resurfaces occasionally based on the couple's body language and "lack of hand holding".[9] In September 2017, Candice Bergen wore a custom made Lingua Franca sweater emblazoned with the phrase on Watch What Happens Live.[6][10]

Share
Retrieved from "https://en.everybodywiki.com/index.php?title=Free_Melania&oldid=1489683"
Categories:
Hidden categories:
This page was last edited on 20 March 2021, at 08:30.
Content is available under License CC BY-SA 3.0 unless otherwise noted.
This page has been accessed 998 times.
Privacy policy
About EverybodyWiki Bios & Wiki
Disclaimers