Download books of Ganess Paudel or buy them on amazon

Ganess Paudel was born on October 2, 1979 in Majheri Patan, Pokhara, Nepal. His real name is Khadak Raj Paudel, but he uses is nickname Ganess Paudel as his pen name. Ganess (In Nepali: गनेस) literally means 'Count Me', which the writer says, negates his connection to Ganesh, the elephant god; and establishes a humanly urge of existentialism. Paitala, the feet, is the instinct-organ for human being and the truth of being a human lies under the feet, according to Ganess Paudel.[2]

Ganess Paudel spent his childhood in Majheri Patan, southern part of Pokhara. He was educated in Rameshwori Primary School onto the fifth grade and went to Bhawani Kalika High School. His first writing was published in Sadhana, a monthly magazine. He studied higher education in General Science from PN Campus, Pokhara and went to RR Campus, Kathmandu to pursue his education in English Literature.

Back home, he started teaching in various schools.

Ganess Paudel lives in Pokhara with his wife Natasha Parajuli and his 9-year-old daughter Shreya Sauravi. 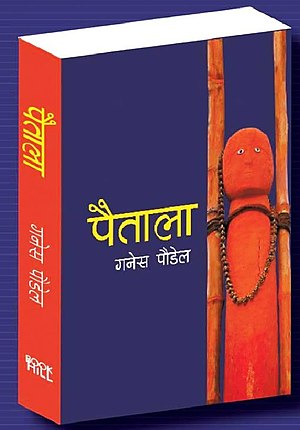 Retrieved from "https://en.everybodywiki.com/index.php?title=Ganess_Paudel&oldid=893551"
Categories:
Hidden categories:
This page was last edited on 25 July 2020, at 12:21.
This page has been accessed 314 times.
Content is available under License CC BY-SA 3.0 unless otherwise noted.
Privacy policy
About EverybodyWiki Bios & Wiki
Disclaimers