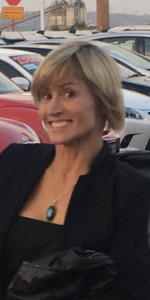 Hampson is from Ashland, Oregon[2] and started her athletic career in high school at Rogue River High School in Rogue River, Oregon.[3] In high school, she set the record of the 3000 metres woman's race at 10 minutes, 15 seconds.[4]

After graduating high school, Hampson was offered a scholarship to run at Auburn University in Auburn, Alabama, which she accepted.[5] After three months at Auburn, Hampson dropped out of school.[5] By December of that year, she moved back to Oregon to live with her family.[5] Hampson moved to Los Angeles with her sister, saying "I was such a serious runner in high school, I think that wigging out at Auburn was kind of a reaction to being so serious in high school."[5]

When Hampson was 22, she attended Santa Monica College in Santa Monica, California, then later deciding to go to a four-year university.[6][7] She decided to go to the University of California, Los Angeles for her track and cross country running career.[5] When Hampson began running, she was surprised at the level of competition existing at the collegiate level, "She was shocked that even more was expected than she put out," her father Scott Hampson said.[5] Hampson struggled with her ability to run due to anemia, and a test reported that she had the lowest iron levels that her woman's cross country coach has ever seen, resulting in Hampson ordered to stop running for three weeks.[5]

Hampson became the team captain of the UCLA woman's track and cross country team, composed mainly of freshman college women. "I absolutely love these girls and I want to do everything I can to help them adjust and do well here", Hampson said. Her coach stated "From day one she looked like a different athlete to me than I had ever seen in the previous two, two-and-a-half years that she’d been here at UCLA".[5] Hampson received her Sociology degree from University of California, Los Angeles in 1996.[1] In 1997, Hampson retired from her athletic career, with her last cross country race at the District VIII race at the California State University, Fresno in Fresno, California.[1][8]

Retrieved from "https://en.everybodywiki.com/index.php?title=Githa_Hampson&oldid=896248"
Categories:
Hidden categories:
This page was last edited on 26 July 2020, at 04:47.
This page has been accessed 716 times.
Content is available under License CC BY-SA 3.0 unless otherwise noted.
Privacy policy
About EverybodyWiki Bios & Wiki
Disclaimers