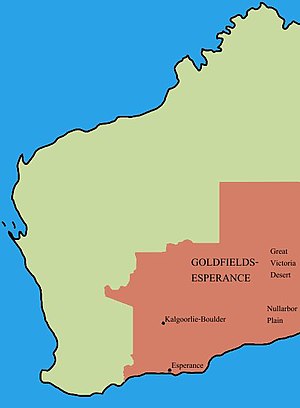 The Goldfields-Esperance region is one of the nine regions of Western Australia. It is located in the south eastern corner of Western Australia, and comprises the local government areas of Coolgardie, Dundas, Esperance, Kalgoorlie-Boulder, Laverton, Leonora, Menzies, Ngaanyatjarraku and Ravensthorpe.[1]

It also incorporates the area along the Great Australian Bight to the South Australian border known as the Nullarbor.

The Goldfields-Esperance region is the largest of Western Australia's regions, with an area of 770,488 square kilometres (297,487 sq mi), 70,800 square kilometres (27,336 sq mi), larger than the U.S. state of Texas or the combined area of Texas and North Dakota.[1] It is mostly a low and flat plateau of extremely ancient Precambrian rocks which have been stable since long before the Paleozoic. Because of the extreme geological stability and the absence of glaciation since the Carboniferous, the soils are extremely infertile and generally quite saline. Consequently, the region supports the lowest stocking rates in the world: it is considered that one sheep per square mile is the maximum sustainable rate except in the small wetter area near Esperance. There are no rivers; any rainfall that is not absorbed by the dense rooting systems of the native flora percolates to form extremely saline groundwater which is very frequently too salty even for adult sheep.

The climate is mostly hot and dry. Annual rainfall is typically around 250 mm (10 inches) per year and can be very variable, except in the small area near Esperance and Cape Arid National Park where reliable winter rainfall can give annual totals as high as 635 mm (25 inches) falling mainly in the winter months. Most rainfall is produced by thunderstorms in spring or summer or by cloudbands from the northwest in autumn and winter, but sometimes cyclones from the Pilbara decay into rain depressions and produce heavy rainfall. Climate change has already had a major impact[citation needed]: in the Kalgoorlie – Eucla – Wiluna – Giles area annual rainfall has increased by over 40 percent since 1967 – probably due to lower frequencies of anticyclones located over the interior of Australia instead of the adjacent oceans.

The Little Sandy Desert and the Gibson Desert are found in the northern part of the region with the Great Victoria Desert in the south east.[2]

It has a population of just under 60,000 people,[1] about half of whom live in the City of Kalgoorlie-Boulder. Another quarter live in the Shire of Esperance, and the remaining shires are very sparsely populated. Nearly 10% of the region's population are of Aboriginal descent, which is substantially higher than the state as a whole.

The economy of the Goldfields sub-region is based on the extraction and processing of various mineral resources, primarily gold and nickel. In 2012 the mining of gold, nickel and platinum yielded just under A$9 billion.[3]

Pastoralism in the northern goldfields commenced in the early 1900s with Yundamindera Station being established by Dr. Laver. In 1923 Yundmindera was purchased along with Mount Celia Station with a combined area of over 1,000,000 acres (4,047 km2) by T. H. Pearse who stocked the property with sheep. Between 1925 and 1928 more eastern states pastoralists scores of leases were established and over £1,500,000 were invested in properties in the northern and eastern goldfields. In three months of 1925 over 40,000 sheep were railed to the area and in one month of 1927 seven trains carrying sheep arrived. By 1934 the goldfields were stocked with over 500,000 sheep and 25,000 cattle. Shearing the same year produced approximately 11,667 bales of wool valued at £243,600.[4]

Further south near Esperance, the economy is based on agriculture with wheat, canola and barley widely grown and make up about 80% of the areas agricultural economy.[3] These crops require huge inputs in fertilisers because of the sandy nature of the soils and are a major threat to the region's great plant diversity. Pastoralism is also common with both sheep and cattle stations being common in the area. Along the coast fishing and aquaculture are common with fisheries for abalone, pilchards and sharks.[3]

Retrieved from "https://en.everybodywiki.com/index.php?title=Goldfields-Esperance&oldid=498545"
Categories:
Hidden categories:
This page was last edited on 16 July 2019, at 07:10.
This page has been accessed 110 times.
Content is available under License CC BY-SA 3.0 unless otherwise noted.
Privacy policy
About EverybodyWiki Bios & Wiki
Disclaimers
Mobile view