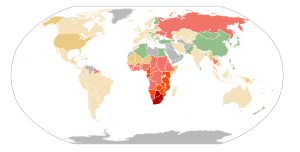 UNAIDS has no complete data for North Korea, but estimates that less than 0.2% of the adult population has HIV.

There are no independent statistics of the prevalence of HIV/AIDS in North Korea. Officially, the country maintains that it is completely free of AIDS and has consistently reported zero cases of AIDS to UNAIDS. The World Health Organization (WHO) estimates that fewer than 100 people in the country have HIV/AIDS. UNAIDS estimates the prevalence of HIV within the adult population to be less than 0.2%. However, statistics inferred from other health-related data by WHO estimate as much as 700 annual deaths from HIV/AIDS in North Korea, but this data is calculated on the basis of countries in the same WHO region that have HIV/AIDS epidemics.

The North Korean government is reluctant to admit any HIV/AIDS epidemic in the country, but works with international organizations to prevent any outbreak in the future. International observers have assessed that the spread of sexually transmitted infections (STIs) in general poses a risk of the spread of HIV in the country. The number of intravenous drug users is on the rise and also poses similar risks. Sex trade and travel across the Chinese border is regarded as a significant risk, since China has high numbers of HIV positive people. Within the general population, awareness about HIV/AIDS is relatively high. There are some legal instruments that could stigmatize people who are at risk of suffering from HIV/AIDS.

Lab at the Pyongyang Maternity Hospital. Hospital staff sometimes has inadequate awareness about HIV/AIDS and blood transfusions in particular remain a risk.

The North Korean government acknowledges no AIDS cases in the country. The increase of intravenous drug users and sex workers with HIV, particularly in relation to cross-border travel with China, is seen as the biggest risk by the UNPF, but the North Korean government is reluctant to admit the nature of the risks. Despite denial of any present problem, the government is committed to raising awareness with the WHO, UNICEF and UNPF to prevent any outbreak in the future.[1]

Both adult men and women are reasonably educated about HIV/AIDS. More than two thirds of them know about ways to avoid HIV/AIDS, and there are only few misconceptions.[2] However, according to the UNPF, even hospital staff occasionally has limited awareness.[1]

The country's poor practices concerning blood transfusions increase the risk of HIV/AIDS exposure. Another risk factor is cross-border travel between North Korea and China, that has increased in recent years. China has a particularly high number HIV cases.[3]

Blood tests are administered on travelers. In the future, the WHO wishes to see better monitoring of STIs in general, and better promotion of condom use.[3] World AIDS Day is observed in the country.[4]

It is estimated that fewer than 100 people in the country have HIV/AIDS.[3] HIV prevalence in adults aged 15 to 49 is estimated at less than 0.2% of that population.[5] According to official statistics from the North Korean government, the country is completely AIDS free.[1] Between 1979 and 1997, North Korea reported zero cases of AIDS annually.[6] Newest data concerning the prevalence of HIV/AIDS is from 2004, and no newer figures have been made available.[3]

According to the WHO estimates inferred from other health-related data in 2004, there are 700 annual deaths from HIV/AIDS in North Korea. This means 3.0 deaths per 100,000 people. HIV/AIDS causes the loss of 37,000 disability-adjusted life years (DALY), or 164 DALYs per 100,000 people. However, this data is calculated from figures from other countries in the same WHO region, which includes South and Southeast Asian countries that have HIV/AIDS epidemics.[7]

Sexual practices of youths in the country are not well known, contributing to limited knowledge about the HIV/AIDS situation in the country.[3] HIV infections in pregnant women are closely monitored, and no cases have been found so far.[3] 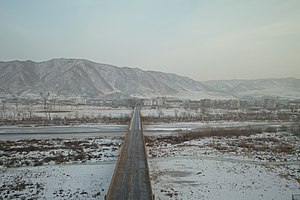 North Korea has punitive laws concerning certain populations at risk of HIV/AIDS. According to UNAIDS, such laws can impose stigma on those affected by HIV/AIDS and hinder their possibilities to search for treatment. North Korea criminally sanctions sex workers and solicitation of sex trade. Some drug related crimes are a capital offense. On the other hand, drug users are not subjected to compulsory detainment. Sex between consenting adult males is not illegal.[10] North Korea deports people upon discovery of HIV status.[11]

There are testing points and clinics,[1] but no antiretroviral therapy is reportedly given.[5]

Retrieved from "https://en.everybodywiki.com/index.php?title=HIV/AIDS_in_North_Korea&oldid=902591"
Categories:
Hidden categories:
This page was last edited on 30 July 2020, at 00:28.
This page has been accessed 276 times.
Content is available under License CC BY-SA 3.0 unless otherwise noted.
Privacy policy
About EverybodyWiki Bios & Wiki
Disclaimers