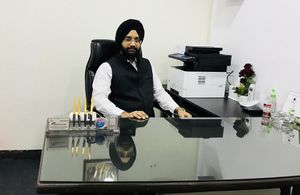 Harpreet Gaba is a professional speaker based out of the capital city of Haryana and Punjab, Chandigarh

Harpreet Gaba is a professional speaker based out of the capital city of Haryana and Punjab, Chandigarh.

In 2013, while he was studying at B Tech, he started a small firm named Networth IT Solutions, which was dealing with IT-based development and training.

He passed out of college and joined business of consulting in which he worked in recruiting candidates for different companies. In 2014, he started education business related to English coaching and technical studies under the name Dolphin Head Hunters.

He followed up with a branch of Dolphin Head Hunters in Patiala and Ambala. In 2015, he launched a Learning Management system, in collaboration with Networth IT Solutions.

Later on, at the age of 24, Harpreet opened one more company named Speedy Jobs and a famous job portal which turned into big brand afterwards.This brand today offers free jobs to all the needy freshers and get their skills displayed among almost 300 companies that include SME's and MNC's

He resides in Chandigarh with his family and performs worldwide.

Some of the most prominent countries from where his followers are getting a lot of support from him includes: