Listen to songs of this musical artist Hawk Nelson or Buy album of him/her on amazonHawk Nelson is a Canadian Christian rock and pop punk band from Peterborough, Ontario. Formed in 2000, the band has released eight studio albums to date.

In 2000, Dunn, Clark, and Paige founded a Peterborough-based group called "SWISH",[2] while Biro sang lead vocals for a four-piece group called the "Cheese Monkeys from Planet Nine" from Barrie, Ontario. In 2000, SWISH released their first independent album, Riding Around the Park on Mime Radio, an independent record label based in Peterborough.[2] In January 2002, Biro moved to Peterborough to join Dunn, Clark and Paige and SWISH was renamed "Reason Being", before finally settling with the name "Hawk Nelson".[3] In 2003, they released their second independent album, Saturday Rock Action.[2]

They continued to perform and tour independently in Ontario, Canada, before being signed with Tooth & Nail Records, largely on the recommendation of Trevor McNevan, the lead singer of fellow Tooth & Nail bands Thousand Foot Krutch and FM Static. McNevan, also from Peterborough, Ontario, is credited with discovering the band. In July 2004, Hawk Nelson released their debut album Letters to the President. It was produced by Aaron Sprinkle and McNevan, who also co-wrote the album's fourteen songs. He has also appeared on some of the band's songs, as well as in their video for the song "California".

The band has achieved some success in the mainstream as well. They portrayed The Who on an episode of the NBC drama American Dreams,[4] and they recorded a song named "Bring 'Em Out" as the theme for the 2005 motion picture Yours, Mine and Ours featuring Drake Bell. This song and another hit song "The Show" were both used on Sunday Night Football commercials. "Things We Go Through" from Letters to the President was also featured in Yours, Mine and Ours. In October 2005, the band re-released Letters to the President, with new material including their cover of The Who's "My Generation", three acoustic versions of some of their hits, and a limited edition cover. Hawk Nelson plays the party band for the film Yours, Mine and Ours (2005). On December 20, 2005, Hawk Nelson released an EP titled Bring 'Em Out.[5]

On April 4, 2006, Hawk Nelson released Connect Sets EP with six acoustic tracks, including "Bring Em' Out", "Thing We Go Through", and "California".[6] 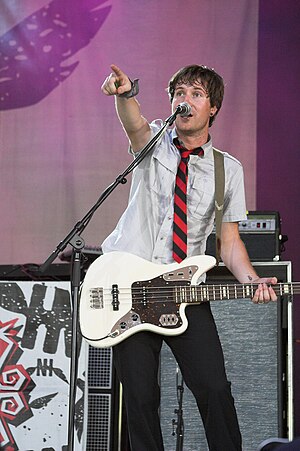 The band released their second studio album, Smile, It's the End of the World, on April 4, 2006. The album was also co-written by Trevor McNevan of Thousand Foot Krutch. The album won a GMA Canada Covenant Award for "Modern Rock/Alternative Album of the Year" in 2006.[7] The album's first single, "Everything You Ever Wanted", went on to hit No. 1 for 9 weeks on the R&R Christian CHR chart, and was the fourth most-played song of 2006.[8] The band spent the middle of 2006 touring the major Christian music festivals, and also took part in Jeremy Camp's Beyond Measure tour. Hawk Nelson released a three-track Christmas EP titled Gloria on November 21, 2006, and then toured with TobyMac's Winter Wonder Slam tour along with The Afters, Family Force 5, and Ayiesha Woods.

Bulletproof Records and producer Ralph Sall have assembled the compilation Charlotte's Web: Music Inspired By The Motion Picture featuring music by Christian artists including Hawk Nelson, Amy Grant, and Billy Ray Cyrus, which was released December 12, 2006. In addition, Bob Carlisle, Leigh Nash (Sixpence None The Richer), and The Send have all contributed exclusive tracks.

On March 27, 2007, Hawk Nelson released a "Double Take" which includes selections from Letters to the President and Smile It's the End of the World.[9] They then released a holiday-themed EP titled Holiday Trio on November 20, 2007.[10]

In 2007, Aaron Tosti left the band to pursue other musical ventures and was replaced by Justin Benner.[11]

The band's third full album, Hawk Nelson Is My Friend was released on April 1, 2008, and featured songs co-written by Trevor McNevan of Thousand Foot Krutch, Raine Maida of Our Lady Peace and Richard Marx.

In 2008, the band also contributed a cover of "Don't You (Forget About Me)", originally by Simple Minds, off the Don't You Forget About Me: The Covers EP. The song was also featured in back-to-school commercials for J.C. Penney. On June 8, 2010, Hawkology: Anothology of Hawk Nelson was released containing three previously released albums: Letters to the President,Smile, It's the End of the World,and Hawk Nelson Is My Friend.[12] On June 16, 2009, Summer EP was released through digital outlets only.[13]

In January 2008, the band headlined their own tour that they called "The Green T Tour" which also featured Capital Lights and Run Kid Run.[14]

Hawk Nelson was nominated for a 2009 Grammy Award in the category for Best Recording Package, for their 2008 album Hawk Nelson Is My Friend.

On February 8, 2011, Hawk Nelson released their fifth studio album titled Crazy Love, which was bundled together with a new acoustic EP titled The Light Sides.[17]

On February 1, 2012, lead vocalist Jason Dunn announced he would be leaving the band in order to pursue his solo project, Lights Go Down, recording an album tentatively titled Abandon Progress.[20] On March 11, 2012, in Fresno, California, Dunn performed his final US show with Hawk Nelson.

Dunn's departure from the band, with Steingard replacing him on vocals marked the shift in the band's genre from fast-paced pop punk to a softer, contemporary alternative pop rock.[citation needed] On December 11, 2012, Hawk Nelson announced they had signed with Fair Trade Services. Made was released on April 2, 2013.[21][22] The album's release was preceded by the release of the album's debut single on January 15, 2013, "Words", featuring Bart Millard of MercyMe,[23] which reached No. 1 on the Christian Hot AC/CHR charts.[24]

On December 10, 2014, Hawk Nelson released the first single off an upcoming album, "Drops In the Ocean" via YouTube and made available on iTunes January 13. The album, Diamonds was announced on January 21.[25] Diamonds is Jonathan Steingard's second album as lead vocalist for the band and first for guitarist Micah Kuiper and drummer David Niacaris. "Just Getting Started", another song from "Diamonds", was heard in several American Idol promo spots ahead of the album's release.[26] The album was released on iTunes and other major music websites on March 17, 2015.[27]

On December 15, 2017, the band released the single, "He Still Does (Miracles)", as a part of a new album, Miracles, which is to be released April 6, 2018 through Fair Trade Services.[citation needed]

Retrieved from "https://en.everybodywiki.com/index.php?title=Hawk_Nelson&oldid=118611"
Category:
Hidden categories:
This page was last edited on 14 September 2018, at 21:08.
This page has been accessed 240 times.
Content is available under License CC BY-SA 3.0 unless otherwise noted.
Privacy policy
About EverybodyWiki Bios & Wiki
Disclaimers