History of Jews in Kurdistan 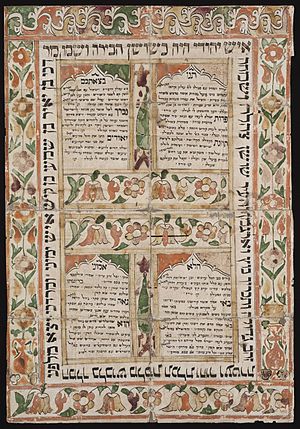 Jews of Kurdistan (Hebrew: יהודי כורדיסטן‎, Yehudei Kurdistan, lit. Jews of Kurdistan; Aramaic: אנשא דידן‎, Nashi Didan, lit. our people; Kurdish: Kurdên cihû‎) are the ancient Eastern Jewish communities, inhabiting the region known as Kurdistan in northern Mesopotamia, roughly covering parts of Iran, northern Iraq, Syria and eastern Turkey. Their clothing and culture is similar to neighbouring Kurdish Muslims and Christian Assyrians. Until their immigration to Israel in the 1940s and early 1950s, the Jews of Kurdistan lived as closed ethnic communities. Kurdish Jews largely spoke Aramaic, as a lingua franca, with some addtionally speaking Kurdish dialects, in particular the Kurmanji dialect in Iraqi Kurdistan. Today, the large majority of Kurdish Jews and their descendants live in Israel. 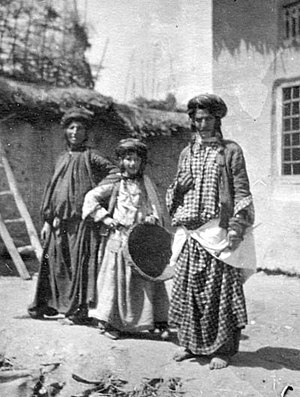 Tradition holds that Israelites of the tribe of Benjamin first arrived in the area of modern Kurdistan after the Assyrian conquest of the Kingdom of Israel during the 8th century BC; they were subsequently relocated to the Assyrian capital.[6] During the first century BC, the royal house of Adiabene, whose capital was Arbil (Aramaic: Arbala; Kurdish: Hewlêr‎), was converted to Judaism.[7] King Monobazes, his queen Helena, and his son and successor Izates are recorded as the first proselytes.[8]

According to the memoirs of Benjamin of Tudela and Pethahiah of Regensburg, there were about 100 Jewish settlements and substantial Jewish population in Kurdistan in 12th century. Benjamin of Tudela also gives the account of David Alroi, the messianic leader from central Kurdistan, who rebelled against the king of Persia and had plans to lead the Jews back to Jerusalem. These travellers also report of well-established and wealthy Jewish communities in Mosul, which was the commercial and spiritual center of Kurdistan. Many Jews fearful of approaching crusaders, had fled from Syria and Palestine to Babylonia and Kurdistan. The Jews of Mosul enjoyed some degree of autonomy over managing their own community.[9]

Tanna'it Asenath Barzani, who lived in Mosul from 1590 to 1670, was the daughter of Rabbi Samuel Barzani of Kurdistan. She later married Jacob Mizrahi Rabbi of Amadiyah (in Iraqi Kurdistan) who lectured at a yeshiva.[10] She was famous for her knowledge of the Torah, Talmud, Kabbalah and Jewish law. After the early death of her husband, she became the head of the yeshiva at Amadiyah, and eventually was recognized as the chief instructor of Torah in Kurdistan. She was called tanna'it (female Talmudic scholar), practiced mysticism, and was reputed to have known the secret names of God.[11] Asenath is also well known for her poetry and excellent command of the Hebrew language. She wrote a long poem of lament and petition in the traditional rhymed metrical form. Her poems are among the few examples of the early modern Hebrew texts written by women.[12]

Immigration of Kurdish Jews to the Land of Israel initiated during late 16th century, with a community of rabbinic scholars arriving to Safed, Galilee, and a Kurdish quarter had been established there as a result. The thriving period of Safed however ended in 1660, with Druze power struggles in the region and an economic decline.

Since the early 20th century some Kurdish Jews had been active in the Zionist movement. One of the most famous members of Lehi (Freedom Fighters of Israel) was Moshe Barazani, whose family immigrated from Iraqi Kurdistan and settled in Jerusalem in the late 1920s.

The Times of Israel reported on September 30, 2013: "Today, there are almost 200,000 Kurdish Jews in Israel, about half of whom live in Jerusalem. There are also over 30 agricultural villages throughout the country that were founded by Kurds."[13]

An extremely close genetic proximity of Jewish communities and non-Jewish Middle Eastern populations has been observed in several DNA studies.[14] In 2001, a team of German, Indian and Israeli specialists published the results of their research on Y-chromosome polymorphism, that showed that Jews and Kurds are close ethnic relatives.[15] The Jews and Kurds, according to the research, have common ancestors who resided in northern Mesopotamia about 4,000 years ago. The Kurdish Jews, though found genetically close to their Muslim Kurdish neighbours, were still closer related to Sephardic and Ashkenazi Jewish groups, supporting the hypothesis of a distant common ancestry, rather than a recent contribution of Judaism converts to this Jewish community (documented conversion to Judaism occurred in the area during the classic period, among the ruling class of the Parthian client Kingdom of Adiabene).[15] Among the Jewish communities, the closest genetic bond to Muslim Kurds was found among the Ashkenazi Jews, though the sequences were still distinguishable.

One of the main problems in the history and historiography of the Jews of Kurdistan was the lack of written history and the lack of documents and historical records. During the 1930s, a German-Jewish Ethnographer, Erich Brauer, began interviewing members of the community. His assistant, Raphael Patai, published the results of his research in Hebrew. The book, Yehude Kurditan: mehqar ethnographi (Jerusalem, 1940), was translated into English in the 1990s. Israeli scholar Mordechai Zaken wrote an important book using written, archival and oral sources that traces the relations between the Jews and the Kurdish masters or chieftains (Aghas). He interviewed 56 Kurdish Jews from six towns (Zahko, Aqrah, Amadiya, Dohuk, Sulaimaniya and Shinno/Ushno/Ushnoviyya), as well as dozens of villages, mostly in the region of Bahdinan.[16] Zaken's Book, Jewish Subjects and their Tribal Chieftains in Kurdistan, is based strongly on oral history sources, and it unveils the personal experience of urban and rural Jews during the first half of the 20th century.[17]

Share
Retrieved from "https://en.everybodywiki.com/index.php?title=History_of_Jews_in_Kurdistan&oldid=2484046"
Categories:
Hidden categories:
This page was last edited on 7 May 2014, at 05:01.
Content is available under License CC BY-SA 3.0 unless otherwise noted.
This page has been accessed 30 times.
Privacy policy
About EverybodyWiki Bios & Wiki
Disclaimers