For the novel of the same name, see Dune: House Corrino. 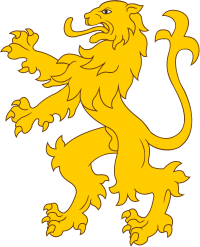 The golden lion is the symbol of House Corrino.

Imperial House Corrino is a fictional noble family from the Dune universe created by Frank Herbert. The Corrinos come to power after humanity's victory against the thinking machines at the Battle of Corrin (from which they take their name),[1] and rule until deposed by Paul Atreides approximately 10,000 years later during the events of the novel Dune (1965).[2]

File:Shaddam+Irulan-Giannini+Cox.jpg
Giancarlo Giannini as Shaddam IV and Julie Cox as Princess Irulan, from the Dune miniseries (2000).

Members of this Imperial House rule as Padishah Emperors of the Known Universe for over 10,000 years, from the time of the Butlerian Jihad until the defeat of the 81st Padishah Emperor Shaddam IV by "Muad'Dib" (Paul Atreides) and the Fremen.[2] Shaddam IV has five daughters, though only two play a part in the events of the Dune saga; the Bene Gesserit-trained Princess Irulan marries Paul in a political alliance designed to effect his accession to the throne,[2] and her sister Princess Wensicia later plots to place her son Farad'n on the throne.[3]

The Imperial House Corrino's ancestral planet is Salusa Secundus, the original seat of imperial power since the Butlerian Jihad, but the Royal Court is at some point moved to the planet Kaitain before the events of Dune.[4] The harsh conditions on Salusa Secundus allow the Corrinos to develop the universe's most-feared military unit, the warrior-fanatic Sardaukar, the means by which House Corrino controls the Empire.[2]

The Prelude to Dune prequel trilogy (1999–2001) by Brian Herbert and Kevin J. Anderson establishes that Salusa Secundus had been devastated by atomics by a renegade House which is subsequently exterminated, their name erased from history. The planet is intentionally left as a barren wasteland.[5]

Following their exile to Salusa Secundus by Paul at the end of Dune, the Corrinos gradually recover strength. In 1969's Dune Messiah, a bitter Irulan—frustrated by Paul's love for his concubine Chani and his refusal to let her be the mother of his heirs—conspires against Paul with representatives of both the Bene Gesserit and Bene Tleilax. After the deaths of both Paul and Chani, a remorseful Irulan defects from the Bene Gesserit and dedicates herself to raising their infant children, twins Leto and Ghanima.[6] Years later during the events of Children of Dune (1976), Wensicia sets in motion a plan to assassinate the twins and place her son Farad'n, the grandson of Shaddam IV and the last hope for a new Corrino Emperor, on the throne. The plot ultimately fails, and Paul's heirs Leto and Ghanima rise to power at the death of the Regent, Paul's sister Alia. Leto is rendered sterile by the process of becoming a human-sandworm hybrid so, to continue the line, he reaches an agreement with Farad'n: Leto will marry Ghanima in a political arrangement, but Farad'n (who will never rule or marry Ghanima) will father all future heirs apparent to the throne.[3]

Following Leto II's death after 3,500 years of rule at the end of God Emperor of Dune (1981), Siona Atreides, a descendant of Farad'n and Ghanima and the culmination of Leto's own breeding program, assumes stewardship of his empire with Duncan Idaho.[7] However, the Empire of a Million Worlds ultimately collapses in The Scattering, as billions flee chaos and famine to seek new opportunities in unknown space. Some 1,500 years later in the events of Heretics of Dune (1984), Duncan and Siona's powerful bloodline permeates the universe and lives on in such luminaries as Miles Teg and Darwi Odrade.[8]

According to the Legends of Dune prequel trilogy (2002–2004) by Brian Herbert and Kevin J. Anderson, Imperial House Corrino is founded by Viceroy Faykan Butler, the grandson of Xavier Harkonnen and grandnephew of Serena Butler. Faykan had married Jessica Boro-Ginjo, a descendant of both the first Grand Patriarch Iblis Ginjo and also of the last Emperors of the Old Empire. In a speech given immediately after the Battle of Corrin, the final battle of the Butlerian Jihad, Faykan takes much of the credit for the victory (though the battle was mainly organized and carried out by Supreme Bashar Vorian Atreides) and announces that he intends to change his name to Corrino in recognition of this historic event. He then combines the positions of Viceroy and Grand Patriarch into one office, declaring himself Emperor of Humanity.[9]

According to the Great Schools of Dune prequel trilogy (2012–2016) by Brian Herbert and Kevin J. Anderson, eighty years after the formation of the Imperium, the position of House Corrino is not as strong as it ought to be. The current Emperor Salvador is an incompetent weakling, who cowers before Manford Torondo, the leader of the fanatic Butlerian movement, even equipping Torondo's followers with two hundred Jihad-era battleships to enforce their beliefs. Most people agree that Salvador's younger brother Roderick would be a much better Emperor, but Roderick loves his brother too much to overthrow him. Eventually, Salvador is assassinated, and Roderick is forced to ascend to the throne, finding the Imperial military to be woefully unprepared to deal with the upheavals in the Imperium and the struggle between the anti-technology Butlerian fanatics and the pro-technology commercial empire of Venport Holdings. Even Roderick himself is nearly forced to abdicate by Josef Venport, who brings his powerful fleet to Salusa Secundus to demand that the new Emperor join forces with him against Torondo, even though Venport himself has no desire to be Emperor. Eventually, though, Roderick comes out on top, securing House Corrino rule for millennia.

The Brian Herbert/Kevin J. Anderson Prelude to Dune prequel trilogy (1999–2001) chronicles the years immediately prior to the events of Dune. The novels explore the last years of the reign of Shaddam's father, Elrood IX Corrino (who is murdered by Count Hasimir Fenring at Shaddam's request), and Shaddam's subsequent rise to power. It is also established that Shaddam has been complicit in the murder of his own elder brother, the Crown Prince Fafnir, and had secretly administered contraceptives to his own mother, Habla, so she couldn't conceive another son to rival him. The series also shows the origins of Shaddam's rivalry with Duke Leto Atreides, and introduces Lady Anirul, the Bene Gesserit mother of Shaddam's daughters.[5]

Prelude to Dune establishes the existence of Tyros Reffa, the illegitimate, secret son of Elrood and Lady Shando Vernius and the half-brother of Shaddam. Introduced in Dune: House Corrino (2001), Tyros is the adopted heir of House Taligari from the planet Zanovar; believing Tyros to be a threat to his throne, Shaddam attempts to murder Tyros by having several major cities on Zanovar destroyed — killing 14 million people. Tyros, who had never cared about the throne, seeks revenge by way of his own assassination plot against Shaddam. The attempt fails, and Tyros is later executed. Before his death, genetic samples are secretly obtained by Ixian ambassador-in-exile Cammar Pilru that both prove Tyros' parentage and allow for the possibility of an heir for Tyros' other half-brother, Rhombur Vernius of Ix.[5]

The following family tree assembles information from Frank Herbert's original novels as well as the prequel series Legends of Dune, Great Schools of Dune, and Prelude to Dune.

For the computer game Dune 2000 and its sequel Emperor: Battle for Dune, Westwood Studios included live-action cutscenes that employed the same costuming style as David Lynch's 1984 movie Dune. These scenes told a non-canon alternate storyline involving Arrakis, the spice melange and the Great Houses, re-introducing the non-canon House Ordos, to the Dune universe.

In Westwood's computer game storyline, a Corrino emperor named Frederick Corrino IV incites three Great Houses (House Atreides, House Harkonnen and House Ordos) to wage a feudalistic war on the planet Arrakis. When Emperor Frederick is later poisoned at the conclusion of the game by his own Bene Gesserit concubine, the reign of House Corrino ends. At the beginning of Emperor: Battle for Dune, the Spacing Guild pronounces the start of a War of Assassins between the three aforesaid Great Houses for control of the Golden Lion Throne. Meanwhile, the Sardaukar seek a new powerful House to serve. House Ordos procures a ghola of the deceased Frederick Corrino from the Bene Tleilax, securing the loyalty of the Sardaukar and intending the false Frederick to act as House Ordos' puppet on the Imperial throne.

Share
Retrieved from "https://en.everybodywiki.com/index.php?title=House_Corrino&oldid=905705"
Categories:
Hidden categories:
This page was last edited on 31 July 2020, at 04:43.
Content is available under License CC BY-SA 3.0 unless otherwise noted.
This page has been accessed 1,302 times.
Privacy policy
About EverybodyWiki Bios & Wiki
Disclaimers