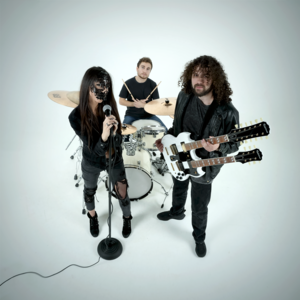 Hyperiff is defined by a diversity of sounds and a demanding stage presence. They are set apart from other bands with their focus on duet-style vocals, which allow both singing members to perform to their strengths. Their female member, Unknown, further sets them apart with her artistic decision to keep her own identity a mystery, adding a layer of drama and intrigue to their on-stage performances.

Prior to their tenure as Hyperiff, founding members Jay Guillo and Nathan Schneider formed the band Men of Ash, a political rock band. However, once they evolved in their artistic style and added a third contributing member to their music the group decided to form Hyperiff.

The band has at the time of this writing released one single, Simple Dreams[3], to be featured on their upcoming album set to release in spring 2022.

Members of Hyperiff claim musical inspiration from all genres[4], each member having slightly different tastes than the other. They believe this contributes to a unique and diverse sound in their work. Some inspirations they name are: Black Sabbath, Rise Against, Avenged Sevenfold, The Beatles, Bon Jovi, Megadeth, Modest Mouse, Metallica, The White Stripes, Brand New, Pink Floyd, Eagles, Tenacious D, and Gorrilaz. These inspiratins are a few among hundreds.

This article "Hyperiff" is from Wikipedia. The list of its authors can be seen in its historical and/or the page Edithistory:Hyperiff. Articles copied from Draft Namespace on Wikipedia could be seen on the Draft Namespace of Wikipedia and not main one.

Share
Retrieved from "https://en.everybodywiki.com/index.php?title=Hyperiff&oldid=2366764"
Category:
Hidden categories:
This page was last edited on 19 March 2022, at 16:22.
Content is available under License CC BY-SA 3.0 unless otherwise noted.
This page has been accessed 543 times.
Privacy policy
About EverybodyWiki Bios & Wiki
Disclaimers