The ICBT Campus, popularly known as the International College of Business and Technology is a BOI approved project formed to conduct internationally recognized educational programs in association with educational institutes.

ICBT Campus was founded in 1990 as a Board of Investment of Sri Lanka project with the objective of providing foreign education programs in Sri Lanka, in association with universities and educational service providers around the world.

Currently it has eight branches in Sri Lanka; the main campus is situated in Colombo-04 and branches in Colombo-03 (Study Abroad), Nugegoda, Kurunegala, Kandy, Matara, Galle, Jaffna and Batticaloa.

The ICBT Colombo Campus operates as the head office and the main campus where most of the senior management of ICBT is based. The ICBT Colombo Campus has the most comprehensive state of the art facilities inclusive of library. Study rooms, Student recreational areas, computer laboratories and Engineering laboratories. At present, the ICBT Mount Campus specializes in Higher National Diploma’s in three Engineering disciplines and Masters Programs.

The Kandy of ICBT commenced its operations in 2006 to cater to the educational need of the Kandy and its surrounding regions. The ICBT Kandy has a dedicated library and computer labs with Internet facility.

This centre is established for the convenience of students in and around Kandy to embark on higher education in Information Technology. This Centre also has all infrastructure facilities such as laboratories, library and lecture rooms for the students to follow the identical programme as at other Campuses.

ICBT Kandy Campus Testing and Training Center provides a wide range of training and testing services from a variety of sources.

The Southern was opened in the heart of the Matara in 2007. This centre is established for the convenience of students in Southern Province to embark on higher education.

ICBT Kurunegala campus located in the North Western province in Sri Lanka. Kurunegala is considered to be a leading hub for educational activities in Sri Lanka. The campus is a modern building with all facilities located in central Kurenagala. Facilities at the building include modern air conditioned lecture halls, latest audio visual equipment and teaching aids, modern computer labs to provide the best learning experience to students. ICBT Kurunegala Campus delivers Diplomas, Bachelor's degrees and master's degrees at affordable costs in a wide range of disciplines.

ICBT Campus Nugegoda was established in 2009 and is situated at No. 132 B, High Level Road, Nugegoda. This center is established for the convenience of students in and around Nugegoda as it is an educational hub in Sri Lanka. ICBT Nugegoda campus comprises both local and Maldivian students. With this setting, a student can expect to gain academic knowledge in the presence of a cross-cultural environment, enhancing communication skills and interaction to develop their future career pathways locally or internationally. This center also has all facilities for the students to follow the identical program as at other campuses.

ICBT Galle Campus was established in August 2011 and is situated in the heart of Galle Town, at no 66, Havelock Road,Galle. This is the second branch operation of ICBT Campus in the Southern Province in addition to the Matara Campus. 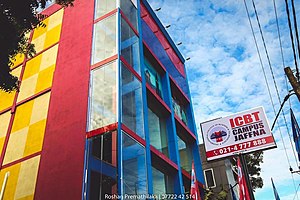 The latest branch of ICBT Campus located in Kalladi, batticaloa. The most modern education facility in the eastern region, ICBT Batticaloa campus is a modern building with all facilities such as modern air conditioned lecture halls, latest audio visual equipment and teaching aids, modern computer labs to provide the best learning experience to students. ICBT batticaloa Campus delivers Diplomas, Bachelor's degrees and master's degrees at affordable costs in a wide range of disciplines.

Share
Retrieved from "https://en.everybodywiki.com/index.php?title=ICBT_Campus&oldid=906347"
Categories:
Hidden categories:
This page was last edited on 31 July 2020, at 06:27.
Content is available under License CC BY-SA 3.0 unless otherwise noted.
This page has been accessed 891 times.
Privacy policy
About EverybodyWiki Bios & Wiki
Disclaimers