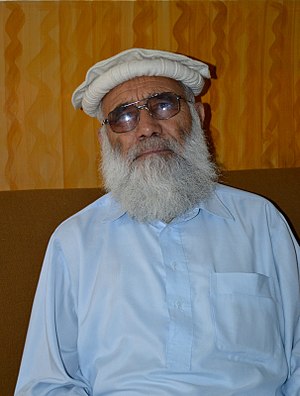 Inayatullah Faizi (born 14 August 1952) is a Pakistani historian, linguist and columnist. He belongs to Balim Laspur Valley of Chitral, Khyber Pakhtunkhwa, Pakistan. He writes articles and columns to Daily Mashriq, Daily Aaj Peshawar, and newspapers and magazines. He is a professor at Govt. Degree College Chitral, where he teaches Urdu. He also writes poem in Khowar, Urdu, and English languages. Faizi is now living in Zhughur, Chitral.

Faizi was born on 14 August 1952 in Laspur Valley Chitral, Khyber Pakhtunkhwa, Pakistan. His father, Mawlana Muhammad Ashraf was a religious person. Faizi passed his matriculation in 1970, completed his master's degree in 1980, M.Phil in 1987, and got his doctorate degree in 1992 from Peshawar University.[1]

From 1976 to 1982, he worked as information officer of the Ministry of Information. He also worked as a chief editor of Jamhoor-e-Islam Khowar. In 1982, he got lecturer-ship from the department of Education, Khyber Pakhtunkhwa. From 1978 to 1983, he also worked as a General Secretary of Anjuman-e-Tarraqui-e-Khowar and later on he became the president of this organization. After completing his studies, he got a job in the Education department. He was previously, teaching in Govt. Degree College Chitral and then moved to Inter College Booni.

His most famous books are Wakhan, Cheen Ba Cheen, Khowar and Urdu Speaking and Chitral Aik Ta'ruf. He attended many national level conferences and presented his articles.

Faizi has been awarded by Pride of Performance Award from the President of Pakistan on 14 August 2011. This award was awarded to him for his works on education, literature, social sector, and culture.

Retrieved from "https://en.everybodywiki.com/index.php?title=Inayatullah_Faizi&oldid=563121"
Categories:
Hidden categories:
This page was last edited on 5 November 2019, at 02:35.
This page has been accessed 142 times.
Content is available under License CC BY-SA 3.0 unless otherwise noted.
Privacy policy
About EverybodyWiki Bios & Wiki
Disclaimers
Mobile view