On May 30, 1918- Radiogramma on the establishment of the Azerbaijan Democratic Republic was sent to Istanbul, Berlin, Vienna, Paris, London, Rome, Washington, Sofia, Bucharest, Tehran, Madrid, Moscow, Stockholm, Tokyo and other capitals.

June 4, 1918 - signing of the Peace and Friendship Treaty between the Azerbaijan Democratic Republic and the Ottoman Empire. 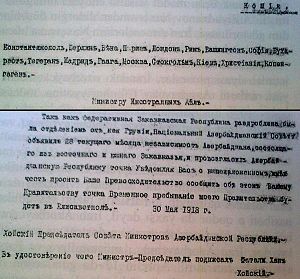 June 17, 1918 - The Azerbaijani National Council, which held its first meeting in Ganja, decided to stop its activities, taking into account the situation in the country. The control of legislative and the executive power was given to the Council of Ministers until the new parliament was called.

June 24, 1918 - The first flag of Azerbaijan Democratic Republic was adopted. the flag depicting the white crescent and eight-pointed star on a red background was declared a temporary symbol of the Republic under the decision of government.[3]

November 7, 1918 - A decision on the establishment of the Ministry of Defense was adopted.[3]

November 9, 1918 - The first flag was approved by the Council of Ministers of the Azerbaijan Democratic Republic.[3]

November 19, 1918 - The Azerbaijani National Council adopted the law on formation of the Parliament.[3]

August 11, 1919 - The law on Citizenship of the Azerbaijan Democratic Republic was adopted.[3]

January 11, 1920 - decision on de facto recognition of Azerbaijan's independence was accepted by the Supreme Council of the Paris peace conference[8][9]

A year later, the protest led by Colonel Surat Huseynov against the presidential elections in Ganja began on June 4, 1993. The situation in Azerbaijan became worse.The government could not prevent these protest and Meanwhile, President Elchibey invited Heydar Aliyev, the chairman of the Nakhchivan Supreme Soviet, to Baku to assist in creating stability in the country. Heydar Aliyev arrived in Ganja and met with Surat Huseynov. The chairman of the National Assembly, Isa Gambar resigned on June 10, and five days later, Heydar Aliyev was elected as the new chairman of the Supreme Soviet of Azerbaijan. He became a president of Azerbaijan on June 24 of the same year and Heydar Aliyev appointed Suret Huseynov as a Prime Minister of Azerbaijan. One year later, on October 4, 1994, Süret Huseynov was arrested for attempting a coup d'etat in Ganja.[18]

At the beginning of 1993, 116 countries of the world recognized the state independence of Azerbaijan. Diplomatic relations with 70 countries were created.[19]

Retrieved from "https://en.everybodywiki.com/index.php?title=Independence_of_Azerbaijan&oldid=907305"
Categories:
Hidden categories:
This page was last edited on 31 July 2020, at 09:04.
This page has been accessed 309 times.
Content is available under License CC BY-SA 3.0 unless otherwise noted.
Privacy policy
About EverybodyWiki Bios & Wiki
Disclaimers